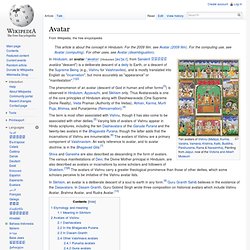 Painting from Jaipur, now at the Victoria and Albert Museum In Hinduism, an avatar /ˈævətɑr/ (Hindustani: [əʋˈt̪aːr], from Sanskrit अवतार avatāra "descent") is a deliberate descent of a deity to Earth, or a descent of the Supreme Being (e.g., Vishnu for Vaishnavites), and is mostly translated into English as "incarnation", but more accurately as "appearance" or "manifestation".[1][2] The term is most often associated with Vishnu, though it has also come to be associated with other deities.[5] Varying lists of avatars of Vishnu appear in Hindu scriptures, including the ten Dashavatara of the Garuda Purana and the twenty-two avatars in the Bhagavata Purana, though the latter adds that the incarnations of Vishnu are innumerable.[6] The avatars of Vishnu are a primary component of Vaishnavism. An early reference to avatar, and to avatar doctrine, is in the Bhagavad Gita.[7] Discovery of quantum vibrations in 'microtubules' inside brain neurons supports controversial theory of consciousness.

Scientific Proof That We Are Becoming Literal Gods. What if I told you that in 1000 years, we will look like petty cavemen in our current physical and mental state compared to future humans? 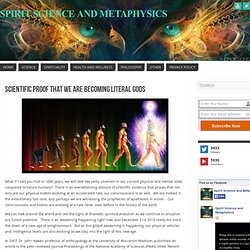 There is an overwhelming amount of scientific evidence that proves that not only are our physical bodies evolving at an accelerated rate, our consciousness is as well. We are indeed in the evolutionary fast lane, and perhaps we are witnessing the prophecies of apotheosis in action. Our consciousness and bodies are evolving at a rate never seen before in the history of the earth We can look around the world and see the signs of dramatic spiritual evolution as we continue to actualize our fullest potential. There is an awakening happening right now, and December 21st 2012 really did mark the dawn of a new age of enlightenment.

In 2007, Dr. The study specifically looked for DNA sequence variation known as SNPs which are mutations at a single point on a chromosome. Anthropologist and geneticist Dr. Sources: 1. 2. 3. 4. 5. 6. 7. 8. 9. 10. Soon, computers will become more intelligent than us. Then what? It's been a trope in science fiction for years: someday, the computers will become self-aware and take over. 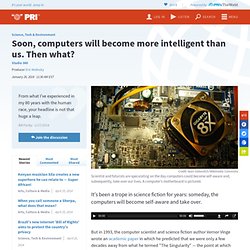 But in 1993, the computer scientist and science fiction author Vernor Vinge wrote an academic paper in which he predicted that we were only a few decades away from what he termed "The Singularity" — the point at which scientists create computers with "greater than human intelligence. " In science fiction, this usually turns out badly for the human race. Inevitably, the computers, like HAL in 2001: A Space Odyssey, decide they don't need the humans. But Vinge and a large cadre of influential minds in computing say what happens then will be beyond anything Hollywood can imagine. Vinge says that we shouldn't see it as humans against computers: we just need to merge our brains with computers.

"We use them simply as amplifications of our own intelligence," he says. But Vinge's optimism is a bit more nuanced. Covering technological, scientific, and cultural trends that are changing human beings in fundamental ways. Giulio Prisco December 5, 2013 Editor's Note: Last week I wrote a somewhat controversial article entitled What is Transhumanism? 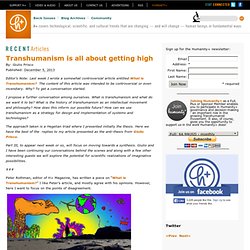 The content of this article was intended to be controversial or even incendiary. Why? To get a conversation started. Technological singularity and transhumanism - new world for old. Will technology provide a perfect future for the ascent of man? 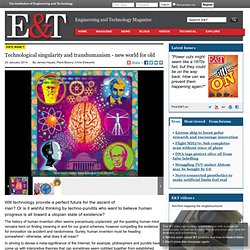 Or is it wishful thinking by techno-pundits who want to believe human progress is all toward a utopian state of existence? The history of human invention often seems precariously unplanned, yet the questing human mind remains bent on finding meaning in and for our grand schemes, however compelling the evidence for innovation via accident and randomness. Surely, human invention must be heading somewhere'- otherwise, what does it all mean? In striving to devise a meta-significance of the Internet, for example, philosophers and pundits have come up with interpretive theories that can sometimes seem cobbled together from established notions of socio-technological evolution, such as the effects of the telegraph, the car, radio and TV, or other world-changing advances. The tech-literate generations born in that decade and after represented a significant change in the relationship between 'ordinary people' and computer technology.