Culture - How black women were whitewashed by art. Clash of the Titans was one of the most popular films of 1981. 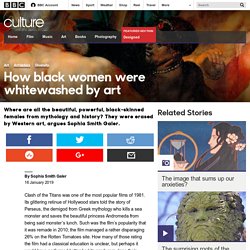 Its glittering retinue of Hollywood stars told the story of Perseus, the demigod from Greek mythology who kills a sea monster and saves the beautiful princess Andromeda from being said monster’s lunch. Such was the film’s popularity that it was remade in 2010; the film managed a rather disparaging 26% on the Rotten Tomatoes site. How many of those rating the film had a classical education is unclear, but perhaps it would have performed better had its producers done their research. As according to British art historian Elizabeth McGrath’s 1992 article The Black Andromeda, Andromeda was, indeed, originally depicted as a black princess from Ethiopia. More like this: – Eight odd details hidden in masterpieces – The rare blue the Maya invented – Striking images of black struggle Yet Renaissance art repeatedly depicts Andromeda as white.

Andromeda is not the only black figure in art that this has happened to, far from it. "An Open Letter to My Sister, Angela Y. Davis" by James Baldwin. By James Baldwin Dear Sister: 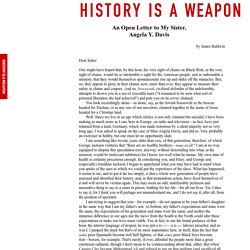 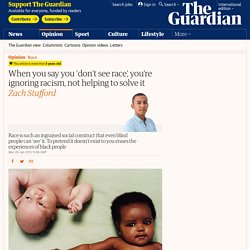 They say this with a sort of “a-ha!” Look on their faces, as if their dawning ability to see my blackness was a gift to us both. When I point out that their eyesight had never left them, that my skin has never changed colors, and that they probably did not really forget that I am black, they inevitably get defensive. First, they try to argue that it was a compliment; the smart ones quickly realize that complimenting someone on not being black is actually pretty racist, so they switch gears. 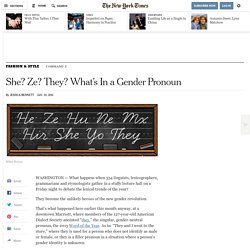 They become the unlikely heroes of the new gender revolution. That’s what happened here earlier this month anyway, at a downtown Marriott, where members of the 127-year-old American Dialect Society anointed “they,” the singular, gender-neutral pronoun, the 2015 Word of the Year. As in: “They and I went to the store,” where they is used for a person who does not identify as male or female, or they is a filler pronoun in a situation where a person’s gender identity is unknown. “Function words don’t get enough love,” a man argued from the floor. “We need to accept ‘they,’ and we need to do it now,” shouted another linguist, hidden behind the crowds. Continue reading the main story Gender binary: That’s the idea that there are two distinct genders, one male and one female, with nothing in between.

America-tyranny-donald-trump. And right now, America is a breeding ground for tyranny. 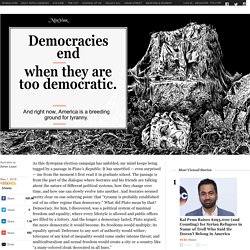 Illustration by Zohar Lazar As this dystopian election campaign has unfolded, my mind keeps being tugged by a passage in Plato’s Republic. It has unsettled — even surprised — me from the moment I first read it in graduate school. The passage is from the part of the dialogue where Socrates and his friends are talking about the nature of different political systems, how they change over time, and how one can slowly evolve into another. The Declining “Equity” by John Chauhan on Prezi. What Is Privilege? National SEED Project - White Privilege: Unpacking the Invisible Knapsack. White Privilege: Unpacking the Invisible Knapsack Downloadable PDF © 1989 Peggy McIntosh "White Privilege: Unpacking the Invisible Knapsack" first appeared in Peace and Freedom Magazine, July/August, 1989, pp. 10-12, a publication of the Women’s International League for Peace and Freedom, Philadelphia, PA. 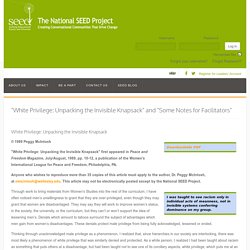 Anyone who wishes to reproduce more than 35 copies of this article must apply to the author, Dr. Peggy McIntosh, at mmcintosh@wellesley.edu. I was taught to see racism only in individual acts of meanness, not in invisible systems conferring dominance on my group. Through work to bring materials from Women’s Studies into the rest of the curriculum, I have often noticed men’s unwillingness to grant that they are over-privileged, even though they may grant that women are disadvantaged. I think whites are carefully taught not to recognize white privilege, as males are taught not to recognize male privilege. Describing white privilege makes one newly accountable. Social Justice: Not Just Another Term for “Diversity” by Paul C. Gorski.

I’m fascinated with the language of equity and diversity work, especially the words we use to describe the essence of what we do in service to that work. 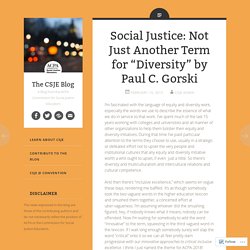 I’ve spent much of the last 15 years working with colleges and universities and all manner of other organizations to help them bolster their equity and diversity initiatives. The Growth of Higher Educators for Social Justice: Collaborative Professional Development in Higher Education.