Transcript of the Constitution of the United States - Official Text 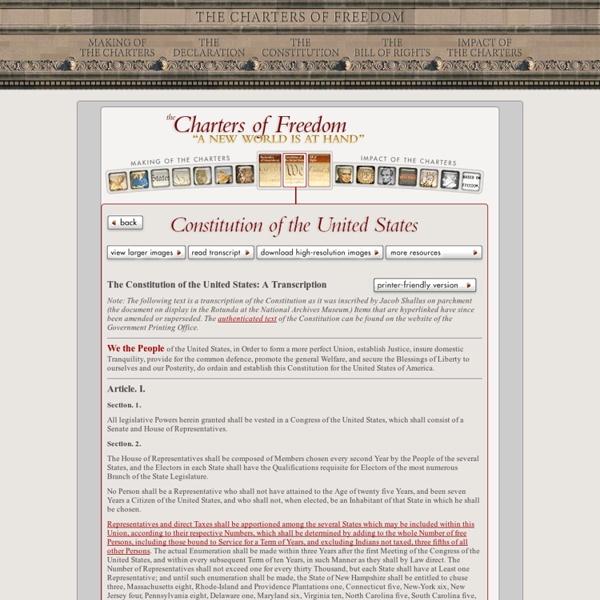 The Constitution of the United States: A Transcription Note: The following text is a transcription of the Constitution as it was inscribed by Jacob Shallus on parchment (the document on display in the Rotunda at the National Archives Museum.) Items that are hyperlinked have since been amended or superseded. The authenticated text of the Constitution can be found on the website of the Government Printing Office. We the People of the United States, in Order to form a more perfect Union, establish Justice, insure domestic Tranquility, provide for the common defence, promote the general Welfare, and secure the Blessings of Liberty to ourselves and our Posterity, do ordain and establish this Constitution for the United States of America. Article. Section. 1. All legislative Powers herein granted shall be vested in a Congress of the United States, which shall consist of a Senate and House of Representatives. Section. 2. Section. 3. The Senate shall have the sole Power to try all Impeachments. G°.

The Best Map Ever Made of America’s Racial Segregation Last year, a pair of researchers from Duke University published a report with a bold title: “The End of the Segregated Century.” U.S. cities, the authors concluded, were less segregated in 2012 than they had been at any point since 1910. But less segregated does not necessarily mean integrated–something this incredible map makes clear in vivd color. The map, created by Dustin Cable at University of Virginia’s Weldon Cooper Center for Public Service, is stunningly comprehensive.

Tell the Copyright Office: Copyright Law Shouldn't Punish Research and Repair After eighteen years, we may finally see real reform to the Digital Millennium Copyright Act’s unconstitutional pro-DRM provisions. But we need your help. In enacting the “anti-circumvention” provisions of the DMCA, Congress ostensibly intended to stop copyright “pirates” from defeating DRM and other content access or copy restrictions on copyrighted works and to ban the “black box” devices intended for that purpose. In practice, the DMCA anti-circumvention provisions haven’t had much impact on unauthorized sharing of copyrighted content.

Iraqi Civil Society Solidarity Initiative (ICSSI) Policy Paper Presented to the Iraqi Government on the legal possibilities available to Iraq to respond to the threat posed by the Ilisu Dam. Author: Save the Tigris and Iraqi Marshes Campaign Baghdad, 22-03-2014 How Public Pension Contracts Violate the U.S. Constitution Public sector pension contracts have started to bankrupt communities and threaten the economic viability of states such as Illinois. Taxpayers are entitled to a conversation as to whether or not these contracts violate the U.S. Constitution. In many states, public sector pension contracts are protected by clauses in that state’s constitution. The words usually used are that public sector pension contracts are contractual agreements that “cannot be diminished or impaired.” An argument against these would take the position that under the Fourteenth Amendment all persons are guaranteed equal protection under state laws.

Which of the 11 American nations do you live in? - The Washington Post Red states and blue states? Flyover country and the coasts? How simplistic. Colin Woodard, a reporter at the Portland Press Herald and author of several books, says North America can be broken neatly into 11 separate nation-states, where dominant cultures explain our voting behaviors and attitudes toward everything from social issues to the role of government. Amy Goodman Is Facing Prison for Reporting on the Dakota Access Pipeline. That Should Scare Us All. This Monday afternoon, as the sun hits its peak over Mandan, North Dakota, the award-winning journalist, and host of Democracy Now!, Amy Goodman will walk into the Morton County–Mandan Combined Law Enforcement and Corrections Center and turn herself in to the local authorities. Her crime: good, unflinching journalism. Goodman had the audacity to commit this journalism on September 3, when she was in North Dakota covering what she calls “the standoff at Standing Rock”: the months-long protests by thousands of Native Americans against the Dakota Access Pipeline.