1993 New York City recorded in high-definition DVHS format / Boing Boing. This remarkably clear VHS footage of Clinton-era yuppies who are now retirement age will either take you back to a more innocent time, or give you a good glimpse of what yuppie scum looked like back in the day. 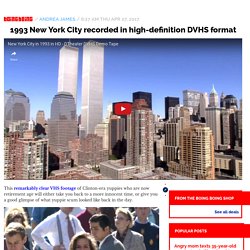 YouTuber Techmoan shares the details: In 2002 D-Theater launched in the US - the dealers needed a demo tape of HD footage. JVC reused some HD video that had been shot as a demo for the Japanese HD market back in 1993. This footage would have most likely been originally used for a HiVision MUSE demo (an HD Broadcast, Tape & Laserdisc format). You can determine that the year is 1993 by the adverts in Times Square - The Radio 501 CD that's advertised on a billboard came out in 1993 and Paper Moon is playing at the Marquis Theater.For those wondering what HD video camera tech existed in 1993 - there are a few options, but it's likely that this footage was shot with a HDVS camera- perhaps a Sony SONY HDC-500 attached to a HDV-10 portable recorder which recorded on UniHi 3/4" tape. 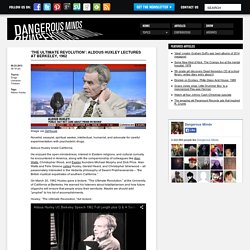 Aldous Huxley loved California. He enjoyed the open-mindedness, interest in Eastern religions, and cultural curiosity he encountered in America, along with the companionship of colleagues like Alan Watts, Christopher Wood, and Esalen founders Michael Murphy and Dick Price. Alan Watts and Felix Greene called Huxley, Gerald Heard, and Christopher Isherwood – all passionately interested in the Vedanta philosophy of Swami Prabhavananda – “the British mystical expatriates of southern California.”

Microworld: 1980 microchip documentary with Shatner. Witness the Birth of a Snowflake. Kinja is in read-only mode. 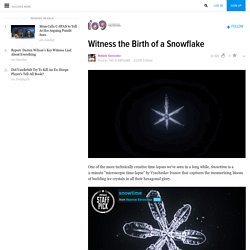 We are working to restore service. You should post that on Highdeas.com. Flagged I didn't mean literally... Snowtime. Microworld: 1980 microchip documentary with Shatner. The Archive Documentary, Part 1 (The Internet Archive) : Jonathan Minard. Pageant of Birmingham - 1938. British WWII propaganda movies to view and download. The British Council has posted a fabulous trove of CC-licensed, downloadable "cultural propaganda" videos commissioned during WWII to "refute the idea that ours was a country stuck in the past. 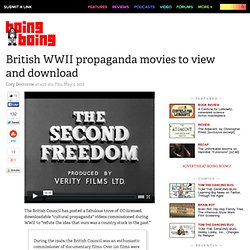 " During the 1940s, the British Council was an enthusiastic commissioner of documentary films. Over 120 films were produced as 'cultural propaganda' to counteract anything the Nazis might throw out and to refute the idea that ours was a country stuck in the past. These films were designed to showcase Britain to the rest of the world, at a time when Britain itself was under attack. Seen by millions of people in over 100 countries worldwide from the 1940's to 1960's, they present a historic snapshot of Britain, portraying its industry, its landscapes, and its people. The Collection is fantastically varied, covering anything from how a bicycle is made, to how the British spend their Saturdays. British Council Film: British Council Film Collection (Thanks, Sarah!) Philip.K. Dick - "Arena" 1/6.

Adam Curtis - All Watched Over by Machines of Loving Grace 1/3 - Love and Power Subs Español Spanish. Documentary Film Video The Cost of a Coke. Ecstasy of Order: The Tetris Masters Full Trailer. Alejandro Jodorowsky's never-made adaptation of Dune is getting a documentary. See, on the one hand, part of me agrees with you unreservedly. 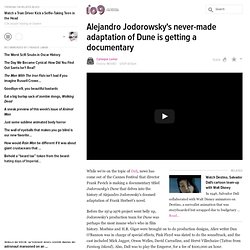 But on the other hand...Well, look at something like the Trueman Show. Owes a MASSIVE debt to the work of Phillip K Dick, particularly Time Out of Joint, but at no point does the movie have to acknowlege this, because it's an 'original' work. Then look at Watchmen, which gained nothing from it's slavish devotion to translating the comic to the screen panel for panel. I'm not saying there isn't a sucessful middle ground, but if Jodorowsky had managed to make a great movie inspired by, rather than directly adapted from Dune, then at least frank Hernbert would've got the credit he deserved for originating the basis, and we would've got what was basically an original movie anyway. Plus, no movie adaptation causes the book to cease to exist, or to become any less a great book than it always has been.

@thekeith82: The difference between this and Constantine, I think, is the presence of a visionary genius director. Watch Salvador Dalí's fake documentary about the quest for hallucinogenic mushrooms.