Music in the Brain: Scientists Finally Reveal the Parts of Our Brain That Are Dedicated to Music. The late neurologist and writer Oliver Sacks had a big hit back in 2007 with his book Musicophilia: Tales of Music and the Brain, addressing as it did from Sacks’ unquenchably brain- and music-curious perspective a connection almost all of us feel instinctively. 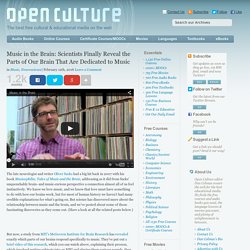 We know we love music, and we know that love must have something to do with how our brains work, but for most of human history we haven’t had many credible explanations for what’s going on. But science has discovered more about the relationship between music and the brain, and we’ve posted about some of those fascinating discoveries as they come out. (Have a look at all the related posts below.) But now, a study from MIT’s McGovern Institute for Brain Research has revealed exactly which parts of our brains respond specifically to music. “Why do we have music?” The Evolution of Ecological Consciousness (2013) Ecological Learning Through Direct Experience. Denali. Teaching Excellence at LSE - Student-Led Awards 2015. Shots of Awe. Ever ponder the miracle of life? 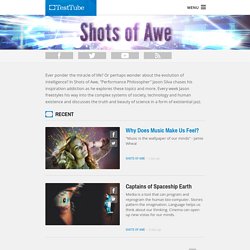 Or perhaps wonder about the evolution of intelligence? In Shots of Awe, "Performance Philosopher" Jason Silva chases his inspiration addiction as he explores these topics and more. Every week Jason freestyles his way into the complex systems of society, technology and human existence and discusses the truth and beauty of science in a form of existential jazz. Recent Why Does Music Make Us Feel? The On Demand Revolution "For many people this type of instant universal access is better than owning" - Kevin Kelly. 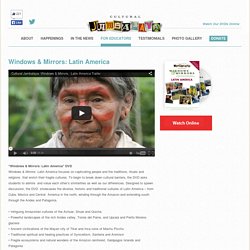 To begin to break down cultural barriers, the DVD asks students to admire and value each other’s similarities as well as our differences. 11 Thought Provoking Images Show What Humans Are Really Doing To The Planet. Go to school, get a job, pay your bills, and try to put yourself in a position to earn enough money to be able to live – this is our current human experience. 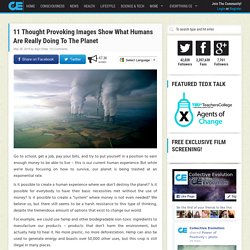 But while we’re busy focusing on how to survive, our planet is being trashed at an exponential rate. Is it possible to create a human experience where we don’t destroy the planet? Is it possible for everybody to have their basic necessities met without the use of money? Save Money & Avoid Toxins: 72 Uses For Common Natural Products. Ditch store bought products and make your own with this handy infographic. 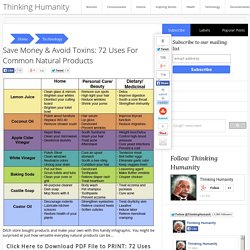 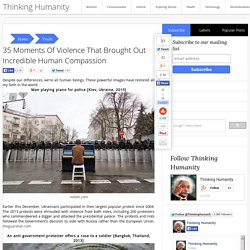 These powerful images have restored all my faith in the world. Man playing piano for police [Kiev, Ukraine, 2013] 30 Of The Most Powerful Images Ever. A picture is worth a thousand words, but not all pictures are created equal. 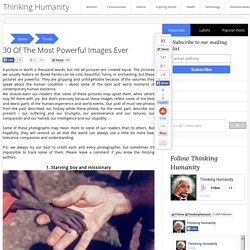 The pictures we usually feature on Bored Panda can be cute, beautiful, funny, or enchanting, but these pictures are powerful. They are gripping and unforgettable because of the volumes they speak about the human condition – about some of the best and worst moments of contemporary human existence. We should warn our readers that some of these pictures may upset them, while others may fill them with joy. The 63 Most Powerful Photos Ever Taken That Perfectly Capture The Human Experience. This incredible collection of moments represents the joy, innocence, despair, curiosity, and undying perseverance within all of us. 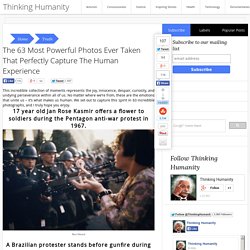 No matter where we’re from, these are the emotions that unite us – it’s what makes us human. We set out to capture this spirit in 63 incredible photographs, and I truly hope you enjoy. 17 year old Jan Rose Kasmir offers a flower to soldiers during the Pentagon anti-war protest in 1967. 24 Rare Historical Photos That Will Leave You Speechless. These photos from the past are a quick and interesting glimpse at the times the pictures were taken. 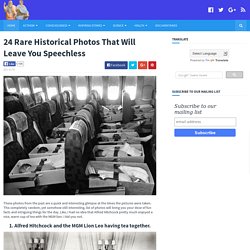 This completely random, yet somehow still interesting, list of photos will bring you your dose of fun facts and intriguing things for the day. Like, I had no idea that Alfred Hitchcock pretty much enjoyed a nice, warm cup of tea with the MGM lion. I kid you not. 1. Alfred Hitchcock and the MGM Lion Leo having tea together. via Twitter / @HistoricalPics 2. Via Vintag 3. Via imgur | reddit /u/ jaycrew 4. Grieving Mothers. Their Turn. Thinking Humanity. Once You See These 20+ Photos, You'll Have No Choice But To Recycle. Credit: Raymond Richards From oil spills to overflowing landfills, man’s unsustainable quest to live a better life with little regard for the environment has caused a staggering amount of environmental disasters to be formed. 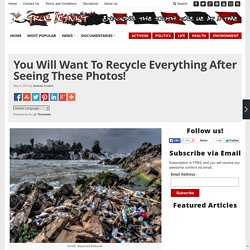 At present, pollution is labeled to be the #1 killer, affecting more than 100 million worldwide. And that’s not all… More than 1 million seabirds and 100 million mammals are killed by pollution every year. Obviously change is needed – but what can inspire people to live more sustainably and limit their carbon footprint than startling statistics? Possibly the photos shown below, which in their heartbreaking real-ness, expose the truth of what is happening across the globe. Following are 20+ shocking photos which capture man-made disasters and their effect on the environment. 1. Credit: Unknown 2. Credit: TheGuardian 3. 4. Credit: Charlie Riedel Albatross Killed By Excess Plastic Ingestion (North Pacific) Credit: PollutionSpeakout.org 5. 6.

Credit: Ares Caius 7. 8. 9. 10. Earth - Building a bee in 60 seconds. Who knew the first 21 days of a honeybee’s life could be so beautiful? Photographer Anand Varma captured the worker bees’ incredible transformation from wriggly translucent larvae sliding from eggs to fully formed labourers buzzing out of their brood cells. The hypnotic 60-second timelapse was a partnership between Anand and the bee lab at the University of California, Davis. Anand became an ardent bee supporter after being tasked with photographing them for a project and setting up his own backyard hive in Berkeley, California.

About half way through the video several insects can be seen crawling around on the growing bees.