The Simulation Hypothesis. Is everything an illusory simulation? 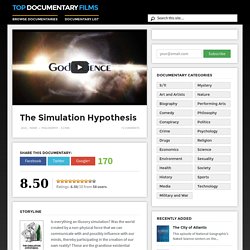 Was the world created by a non-physical force that we can communicate with and possibly influence with our minds, thereby participating in the creation of our own reality? These are the grandiose existential questions central to this documentary, which introduces viewers to the concept of the Simulation Hypothesis. Teasing that there are cutting edge physics experiments that imply Simulation Hypothesis could be true, the film begins by reviewing two primary philosophies regarding the nature of life: materialism and idealism. First introduced by Democritus, materialism credits the atom as the basis for all reality, making consciousness the result of a material process. Plato, on the other hand, believed it is the mind itself that gives way to matter; therefore reality is borne from ideas. Absolute Zero. Why Reading Matters. Why Reading Matters , Home » Science 52 Comments Science writer Rita Carter tells the story of how modern neuroscience has revealed that reading, something most of us take for granted, unlocks remarkable powers. 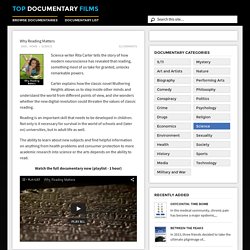 Carter explains how the classic novel Wuthering Heights allows us to step inside other minds and understand the world from different points of view, and she wonders whether the new digital revolution could threaten the values of classic reading. Reading is an important skill that needs to be developed in children. Not only is it necessary for survival in the world of schools and (later on) universities, but in adult life as well. The ability to learn about new subjects and find helpful information on anything from health problems and consumer protection to more academic research into science or the arts depends on the ability to read. Watch the full documentary now (playlist - 1 hour)

OxyContin: Time Bomb (2014) In the medical community, chronic pain has become a major epidemic, and is thought to afflict many tens of millions of people worldwide. 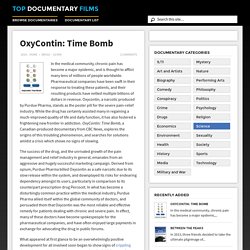 Pharmaceutical companies have been swift in their response to treating these patients, and their resulting products have netted multiple billions of dollars in revenue. Oxycontin, a narcotic produced by Purdue Pharma, stands as the poster pill for the severe pain-relief industry. While the drug has certainly assisted many in regaining a much-improved quality of life and daily function, it has also fostered a frightening new frontier in addiction. OxyContin: Time Bomb, a Canadian-produced documentary from CBC News, explores the origins of this troubling phenomenon, and searches for solutions amidst a crisis which shows no signs of slowing.

Watch Full "Going Clear: Scientology and the Prison of Belief (2015)" Movie Online. An in-depth look at the inner-workings of the Church of Scientology... 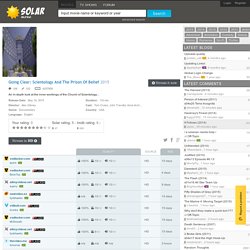 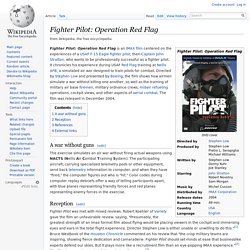 The participating aircraft, carrying specialized telemetry pods or other equipment, send back telemetry information to computer, and when they have "fired," the computer figures out who is "hit. " Color codes during computer replay debriefs offer a way of telling participants apart, with blue planes representing friendly forces and red planes representing enemy forces in the exercise. Reception[edit] References[edit] External links[edit] The Shooter. The man who shot and killed Osama bin Laden sat in a wicker chair in my backyard, wondering how he was going to feed his wife and kids or pay for their medical care. 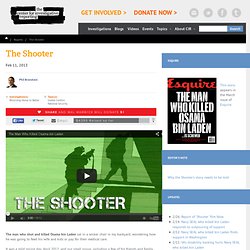 It was a mild spring day, April 2012, and our small group, including a few of his friends and family, was shielded from the sun by the patchwork shadows of maple trees. But the Shooter was sweating as he talked about his uncertain future, his plans to leave the Navy and SEAL Team 6. He stood up several times with an apologetic gripe about the heat, leaving a perspiration stain on the seat-back cushion. Inside LSD. Home » Drugs 127 Comments Could LSD be the next drug in your doctor's arsenal? 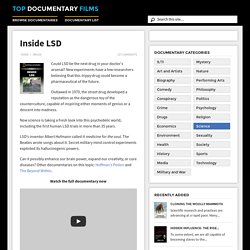 New experiments have a few researchers believing that this trippy drug could become a pharmaceutical of the future. Outlawed in 1970, the street drug developed a reputation as the dangerous toy of the counterculture, capable of inspiring either moments of genius or a descent into madness. Now science is taking a fresh look into this psychedelic world, including the first human LSD trials in more than 35 years. LSD’s inventor Albert Hofmann called it medicine for the soul. Can it possibly enhance our brain power, expand our creativity, or cure diseases? Watch the full documentary now Share this film on: FacebookTwitterGoogle+1.6k Ratings: 7.00/10 from 6 users. More great documentaries: by Taboolaby Taboola Sponsored LinksSponsored Links Promoted LinksPromoted Links. Veritasium: An Element of Truth (2010) This compilation of videos, titled Veritasium: An Element of Truth, provides loving and playful commentary on the magic of science, and all its jaw-dropping complexities and wonderments. 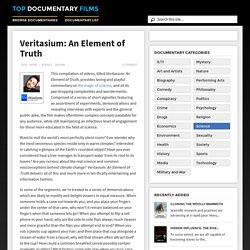 Comprised of a series of short vignettes featuring an assortment of experiments, demonstrations and revealing interviews with experts and the general public alike, the film makes oftentimes complex concepts palatable for any audience, while still maintaining an infectious level of engagement for those more educated in the field of science. Want to visit the world's most perfectly silent room? Ever wonder why the most venomous species reside only in warm climates? Interested in catching a glimpse of the Earth's roundest object?

Have you ever considered how a tree manages to transport water from its root to its leaves? Watch Full "Boxing Gym (2010)" Movie Online. Watch Full "Banksy Does New York.