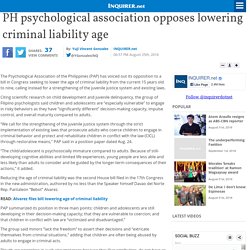 Citing scientific research on child development and juvenile delinquency, the group of Filipino psychologists said children and adolescents are “especially vulnerable” to engage in risky behaviors as they have “significantly different” decision-making capacity, impulse control, and overall maturity compared to adults. Robredo opposes lowering age of criminality. Vice President Leonor “Leni” Robredo said that children should not be included in the war against illegal drugs, adding that human rights are the “core and soul” of the Philippine Constitution. 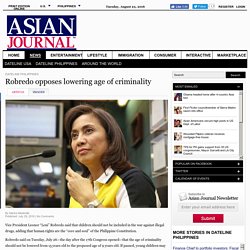 Juvenile justice law does not absolve minors of crimes. Ramon Tulfo’s September 22 column was based on sensationalist assumptions. 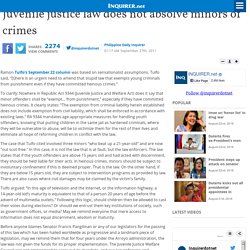 Tulfo said, “[t]here is an urgent need to amend that stupid law that exempts young criminals from punishment even if they have committed heinous crimes.” To clarify: Nowhere in Republic Act 9344 (Juvenile Justice and Welfare Act) does it say that minor offenders shall be “exempt… from punishment,” especially if they have committed heinous crimes. It clearly states: “The exemption from criminal liability herein established does not include exemption from civil liability, which shall be enforced in accordance with existing laws.”

Philippines - Home page. Del Rosario: Crime by minor. A 14-year-old boy was found guilty for committing two counts of rape and given the penalty of imprisonment plus payment of indemnity in the amount of P100,000. 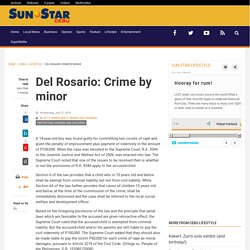 When the case was elevated to the Supreme Court, R.A. 9344 or the Juvenile Justice and Welfare Act of 2006, was enacted into law. EDITORIAL - Age of criminal liability. Kids in conflict with the law and lowering of criminal liability. First of three parts Carlo (not his real name) fell into the hands of the police at the age of 13. 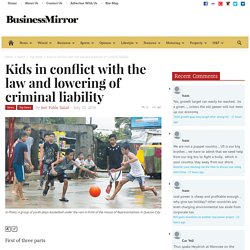 The charge: distribution and abuse of rugby, an inhalant popular to street children his age. It wasn’t his first jaunt into prison. A year ago, he was caught and charged with assaulting a fellow young boy with a knife in a gang rumble. He fled his home to live in the streets years ago to escape an abusive father. Children in conflict with law.

IRON bars at the entrance to the room for children in conflict with the law at Bahay Sandigan in Malabon City. 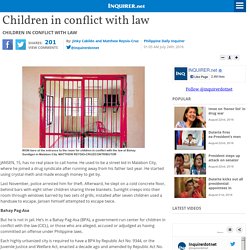 MATTHEW REYSIO-CRUZ/CONTRIBUTOR JANSEN, 15, has no real place to call home. He used to be a street kid in Malabon City, where he joined a drug syndicate after running away from his father last year. He started using crystal meth and made enough money to get by. Last November, police arrested him for theft.

Bahay Pag-Asa But he is not in jail. Each highly urbanized city is required to have a BPA by Republic Act No. 9344, or the Juvenile Justice and Welfare Act, enacted a decade ago and amended by Republic Act No. 10630 in 2013. State vs Child: Lowering the age of criminal responsibility. According to the authors of House Bill No. 2, the present law has resulted in the “pampering” of youth offenders who commit crimes knowing they can get away with it. 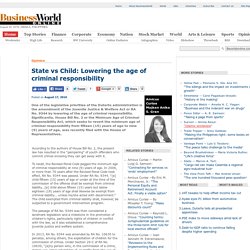 To recall, the Revised Penal Code pegged the minimum age of criminal responsibility at nine (9) years of age. In 2006, or more than 70 years after the Revised Penal Code took effect, RA No. 9344 was passed. Under RA No. 9344, “[a] child fifteen (15) years of age or under at the time of the commission of the offense shall be exempt from criminal liability... [a] child above fifteen (15) years but below eighteen (18) years of age shall likewise be exempt from criminal liability... unless he/she acted with discernment.”

The child exempted from criminal liability shall, however, be subjected to a government intervention program. In 2013, RA No. 9344 was amended by RA No. 10630 to penalize, among others, the exploitation of children for the commission of crimes. Rappler. Juvenile justice body celebrates RA 9344 10th anniversary. CAGAYAN DE ORO CITY, May 20 (PIA) – With the theme, “RA 9344 Isang Dekadang Pag-asa (A Decade of Hope),” the Regional Juvenile Justice and Welfare Committee-10 kicks off the 10th Anniversary of the Enactment of Republic Act 9344 or the Juvenile Justice and Welfare Act of 2006 on May 20 with a motorcade and a short program at Kiosko Kagawasan in Cagayan de Oro City. 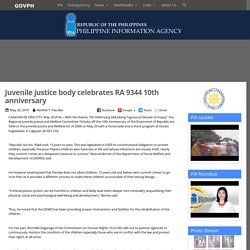 “Republic Act No. 9344 took 13 years to pass. This was legislated to fulfill its constitutional obligation to protect children, especially the poor Filipino children who have less in life and whose infractions are mostly theft; clearly they commit crimes as a desperate measure to survive,” Manuel Borres of the Department of Social Welfare and Development-10 (DSWD) said. He however emphasized that the law does not allow children, 15 years old and below, who commit crimes to go ‘scot-free’ as it provides a different process to make these children accountable of their wrong doings. Juvenile justice. The video footage was as shocking as it was disturbing: on a busy Metro Manila thoroughfare with crawling traffic, a gang of very young boys run to a taxi, open the three passenger doors, spring into the taxi and in a split second, dart out and dash off back into the highway. 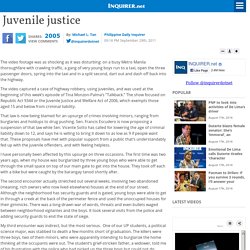 Philippines - An Act strengthening the Juvenile Justice System in the Philippines, amending for the purpose the Republic Act No. 9344, otherwise known as the "Juvenile Justice and Welfare Act of 200+6" and Appropriating Funds therefor (R.A. No. 10630). That stupid Pangilinan law: Duterte vows to amend juvenile justice act. Photo Credit: Philippine Daily Inquirer DAVAO CITY, Philippines – Long opposed to Republic Act (RA) 9344 or the Juvenile Justice and Welfare Act which he says affords juvenile delinquents impunity to commit crimes, tough-talking Davao City Mayor Rodrigo Duterte promised to amend the law should he ever be elected president. 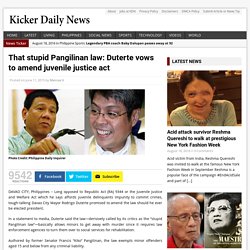 In a statement to media, Duterte said the law—derisively called by its critics as the “stupid Pangilinan law”—basically allows minors to get away with murder since it requires law enforcement agencies to turn them over to social services for rehabilitation. Authored by former Senator Francis “Kiko” Pangilinan, the law exempts minor offenders aged 15 and below from any criminal liability.

Those above 15 until 18 years old meanwhile, are made to undergo an examination by the Department of Social Welfare and Services (DSWD) to determine whether they committed the crime with discernment. This article has gone viral and has been viewed 51005 times so far. Unicef Philippines - Home page. MALACAÑAN, 16 May 2006 – President Gloria Macapagal-Arroyo today officially signed the Juvenile Justice and Welfare Bill into law with a large group of congressional leaders, senators, representatives, cabinet members, policemen, jail wardens, advocates, activists and children celebrating the arrival of a long-awaited milestone in the promotion of child rights in the Philippines.

President Arroyo had certified the legislation as an administrative priority late last year. Both the Senate and House of Representatives earlier unanimously passed the measure, signifying an unusual level of unity among the national political leaders. Member-organizations of the Juvenile Justice Network Philippines (JJNP) are collectively pleased with the newly enacted law saying that “the law will benefit the most marginalized group – child offenders”. Child offenders, according to Consuelo Foundation, Inc., a JJNP member, are the “most discriminated and most hated group”. Dr. Atty. I Spent My Teen Years in Solitary Confinement and This Is What I Learned. Bill lowering age of criminal responsibility filed at the House of Representatives. MANILA—The second bill filed at the House of Representatives of the 17th Congress seeks to amend Republic Act No. 9344 or the “Juvenile Delinquency Act of 2006” which raised the minimum age of criminal responsibility from nine to 15 years old.

Filed jointly by Davao del Norte Rep. and incoming Speaker Pantaleon Alvarez and Capiz Rep. Fredenil Castro, House Bill No. 002 would specifically amend Section 6 of R.A. 9344, more popularly known as the Pangilinan Law, and revert the minimum age of criminal responsibility to nine years old as set forth originally in the Revised Penal Code. Poverty, not juvenile delinquents, causes crime. Don’t blame the children, group reminds Duterte. World Report 2016: Children Behind Bars. Shortly after 16-year-old T.W. was booked into Florida’s Polk County Jail in February 2012, his three cellmates punched him, whipped him with wet towels, and nearly strangled him with a pillowcase. They then urinated on him, sprayed his face with cleaning fluid, and stripped him naked before wrapping a sheet around his neck, tying the other end around the window bar, and pulling so tight he lost consciousness. They repeated this attack three times over the course of several hours without jail guards on regular rounds even noticing, a federal magistrate judge found.