POV - The Education of Shelby Knox. Synopsis The swift rise in federally funded, abstinence-only sex education under the Bush administration is in the headlines today, sparking an intense national debate about our responsibility to teach teens the facts of life. Those supporting an abstinence-only approach say that teaching anything but abstinence just encourages teens to experiment with sex. Opponents say that withholding information about condom use and birth control will only lead to unwanted pregnancies and sexually transmitted diseases. Into the culture wars steps 15-year-old Shelby Knox of Lubbock, Texas. A self-described "good Southern Baptist girl," Knox herself has pledged abstinence until marriage. Read the full film description » Future of Feminism and Ms. at 40. 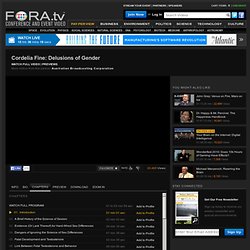 Cordelia Fine is an academic psychologist and writer. She is the author of A Mind of Its Own: How your brain distorts and deceives, and writes regularly for the press. Her second book, Delusions of Gender: How our minds, society, and neurosexism create difference has recently been published. Cordelia studied Experimental Psychology at Oxford University, followed by an M.Phil in Criminology at Cambridge University. She is currently a Senior Research Associate at the Centre for Agency, Values and Ethics at Macquarie University, and an Honorary Research Fellow at the Department of Psychological Sciences at the University of Melbourne. Vali Nasr Vali Nasr is Senior Adjunct Fellow on the Middle East for the Council on Foreign Relations.

Additionally he is Professor of Middle East and South Asia Politics and Associate Chair of Research at the Department of National Security at the Naval Postgraduate School. To download this program become a Front Row member. gender. IQ2: Feminism Has Failed. Bio Gay Alcorn Gay Alcorn began her career in Queensland, and joined The Sunday Age before its launch in 1989. 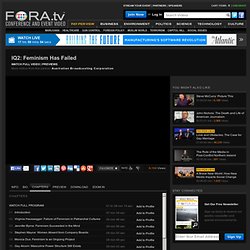 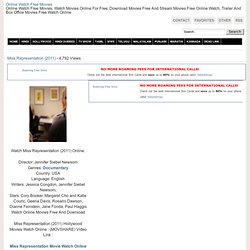 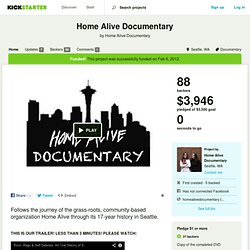 The organization was founded by nine women in response to the brutal rape and murderer of Mia Zapata, lead singer of the influential punk band of the early 90s, The Gits. Home Alive began in 1993 and experienced many changes: from becoming a non-profit to gaining international attention with a CD, and finally relinquishing their non-profit status in 2010. The documentary is focused around community response to tragedy using the Do It Yourself ethos to try to make a difference. The documentary partially focuses on the difficulties of working as a collective, the limitations of a non-profit status, and the ever-present funding issues.

As in any collective and organization there are varying conceptions and outlooks on the directions it will take. A Hisayasu SATO FILM "Love & Loathing & Lulu & Ayano" official trailer - eng.sub. Trigger Trailer.