Justice for all except

Opinion: How Policing Black Boys Leads To The Conditioning Of Black Men : Code Switch. Tomiko Shine holds up a picture of Tamir Rice during a protest in Washington, D.C. 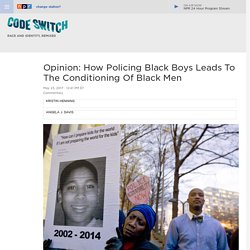 Jose Luis Magana/AP hide caption toggle caption Jose Luis Magana/AP Tomiko Shine holds up a picture of Tamir Rice during a protest in Washington, D.C. Mistrust and alienation between black men and the police have become so entrenched that we need radical, sweeping change. But, as criminal defense attorneys, we can attest to the fact that as harshly and as unfairly as black men have been treated in the criminal justice system, the fate of black boys has been worse.

Decades of data show that the journey to racial disparity begins when black men are boys. Adolescence is a critical time during which young people come to understand and respect or resent the law and legal institutions. Black boys who congregate on the "corner" attract the attention of the police day or night.

If we expect any meaningful change in the relationship between black men and the police, we have to start early. Bresha Meadows enters a plea deal, will spend two more months in detention. Trial by Fire. The fire moved quickly through the house, a one-story wood-frame structure in a working-class neighborhood of Corsicana, in northeast Texas. 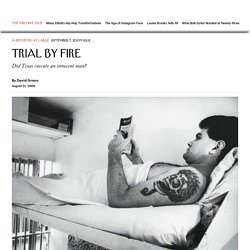 Flames spread along the walls, bursting through doorways, blistering paint and tiles and furniture. Walking In Their Footsteps At A Former Japanese Internment Camp : Code Switch. The Manzanar cemetery includes a white obelisk monument in the midst of a wide clearing, making it feel lonely. 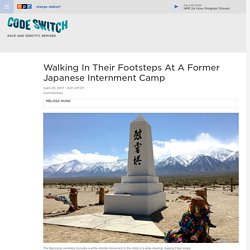 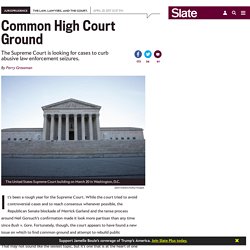 While the court tried to avoid controversial cases and to reach consensus whenever possible, the Republican Senate blockade of Merrick Garland and the tense process around Neil Gorsuch’s confirmation made it look more partisan than any time since Bush v. Gore. Fortunately, though, the court appears to have found a new issue on which to find common ground and attempt to rebuild public confidence: curbing civil forfeiture abuses and other property seizures by police. Unarmed. Not wearing a seatbelt. Running away. Police are more likely to shoot if you’re black. In the past three years, police shootings have sparked an unprecedented series of protests across the country. 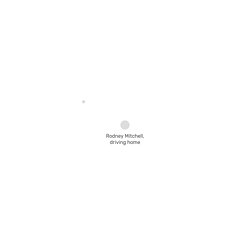 Groups led by Black Lives Matter said the shootings were part of a larger pattern of racial discrimination. Law enforcement officials said they weren’t. So we examined every Florida police shooting from 2009 to 2014, using police reports, news articles, lawsuits and autopsies to break down each one to its most basic traits. A $15 tax bill nearly cost a family their home. With Trump, it would have. When Paula and Joe Frye found their home in Muskogee, Oklahoma, listed for sale, they were shocked. 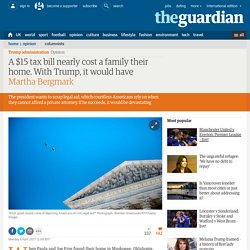 They certainly hadn’t listed it, so who had? It turned out county officials had recently turned up an unpaid property tax bill from years earlier and used it as a pretext to auction off the home to the highest bidder. The tax bill in question was $15. How much did the Louisiana Purchase actually cost?

Wikimedia Commons/White House Historical Association It’s a familiar chapter in our history, part of the triumphant narrative of westward expansion: In 1803, the United States bought a massive chunk of North America, and we got it for a song. 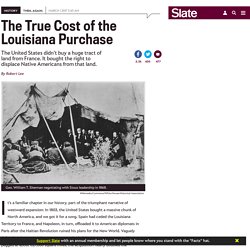 For Female Inmates In New York City, Prison Is A Crowded, Windowless Room. More than a hundred female federal inmates, sentenced to long term prison, have instead been stuck for years in the Metropolitan Detention Center in Brooklyn where conditions violate international standards. 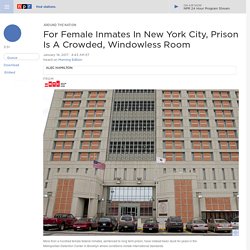 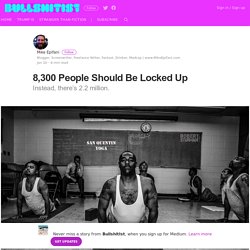 In 2013, it’s 698 people per 100,000. That’s a 700% increase, and that’s per 100,000. It has nothing to do with the total US population, that’s a per capita figure. Do Not Resist Official Trailer 1 (2016) - Documentary. 'We shouldn't have to feel like this': Girl, nine, gives tearful speech in Charlotte. A nine-year-old Charlotte girl’s tearful speech about how African Americans are “treated differently than other people” has gone viral as protests about police brutality continue to ignite the North Carolina city. 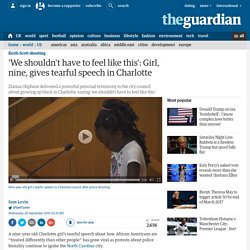 Zianna Oliphant could barely keep her composure as she offered powerful testimony at a city council meeting on Monday about growing up black in Charlotte, where the recent fatal police shooting of Keith Scott has renewed national debates about policing. “I feel like that we are treated differently than other people.

I don’t like how we’re treated. Just because of our color doesn’t mean anything to me,” she said before breaking down in tears. “You’re doing a great job!” New Analysis: 2016 Judicial Elections See Secret Money and Heightened Outside Spending. Politicized and High-Dollar Races Threaten Fair and Impartial Courts In an election season that has seen an unprecedented blockade of President Obama’s Supreme Court nominee, Merrick Garland, it’s easy to overlook troubling developments for judicial selection at the state court level, where 95 percent of all cases are heard.

In total, 39 states hold elections to choose all or some of their judges. This November, 27 states will hold elections for seats on their highest courts. Early indicators suggest that several of these races will be dominated by special interest spending, a large portion of it secret money from groups that do not disclose their donors, according to an analysis by the Brennan Center for Justice of seven supreme court elections and primaries that were completed earlier in 2016.

North Dakota activates National Guard to protect the pipeline instead of our tribes. On Saturday, August 3rd, while most Americans were relaxing into a 3-day Labor Day weekend, an oil company’s private security force loosed dogs upon peaceful Native American protesters trying to stop the destruction of burial sites on the northern border of the Standing Rock Sioux Reservation in North Dakota. This happened just one day after the tribe’s historic preservation officer had filed in court the location of the archaeological site on private land located in the pipeline corridor. The next morning the Dakota Access Pipeline crew were observed moving their heavy construction equipment 15 miles to the site identified in the federal court filing and began to dig and bulldoze the site containing stone cairns with Native American remains. An estimated crowd of 300 followed the crew to the site and were met by a private security force and attack dogs.

The human toll of America's public defender crisis. “What if I’d had more time?” Across the US, it is the question public defenders often find themselves asking the most. Would a young, pregnant African American woman in Lexington, Kentucky, who faces minor fraud charges laid down in April still be in jail if her lawyer had the time to appeal against an impossible $40,000 bail bond? Could the 50-year-old illiterate white man in Cole County, Missouri, charged in August with vehicular assault and facing over a decade in prison, ever be assigned an attorney with the resources to defend him? How many of the 30 defendants present for a single “mass plea” hearing in Louisiana’s 16th judicial district in June would have pleaded not guilty if they’d had more than 20 seconds of legal counsel?

In 1963, the landmark Gideon v Wainwright supreme court ruling enshrined the constitutional right for indigent criminal defendants – those who cannot afford to pay for a lawyer – to access legal counsel. Where the Death Penalty Still Lives. New report: In tough times, police start seizing a lot more stuff from people. Recent years have brought public scrutiny on a controversial law enforcement practice known as civil asset forfeiture, which lets police seize and keep cash and property from people who are never convicted — and in many cases, even charged — with wrongdoing. But despite a growing public outcry spurred in part by news investigations and congressional hearings, a new report Tuesday from the Institute for Justice, a nonprofit civil-liberties law firm, finds that the past decade has seen a "meteoric, exponential increase" in the use of the practice.

Police Can Use a Legal Grey Area to Rob Anyone of Their Belongings. Study Supports Suspicion That Police Are More Likely to Use Force on Blacks. Photo. Police, Prosecutors and Judges Rely on a Flawed $2 Drug Test That Puts Innocent People Behind Bars. Instagram photo by Chris Rock. The Prosecutors Who Aim to Kill. Photo. KING: Brock Turner, Cory Batey show how race affects sentencing. Ronald Reagan’s shameful legacy: Violence, the homeless, mental illness. In November 1980, Republican Ronald Reagan overwhelmingly defeated Jimmy Carter, who received less than 42% of the popular vote, for president. One in 10 Dallas inmates locked up solely because they’re mentally ill. Can officials change that?

An inmate lies on the floor of one of the Dallas County Jail’s mental health wings. (2012 File Photo/David Woo) Houston judge is responsible for student debt arrests. In February, a guy in Houston was arrested by U.S. 4 Ways Border Patrol Union’s Trump Endorsement Is Filled With Lies and Misinformation. Death Row’s Race Problem. The Prison-Commercial Complex. Huffingtonpost. All 50 US states fail to meet global police use of force standards, report finds. America Has a Horrific Wrongful Conviction Problem. Remembering Injustice to Japanese Americans. Melvin Russell: I love being a police officer, but we need reform. How One Organization Unravels Some of the Mystery of Campaign Finance. How Did the U.S. Become a Prison State? And How Do We Get Out?

Each Day, 731,000 People Are in Jail, Many Because They Can't Afford Bail. ALEC Exposed. America's Justice System Sure Doesn't Know Much Science. The Surprising Truth About Sniffer Dogs. Police Taser Drones Legalized In North Dakota. A wrongfully convicted person exonerated on average 1 every 3 days. We accept assembly-line justice for the poor. But we shouldn’t. More Harm Than Good: How Children are Unjustly Tried as Adults in New Orleans.