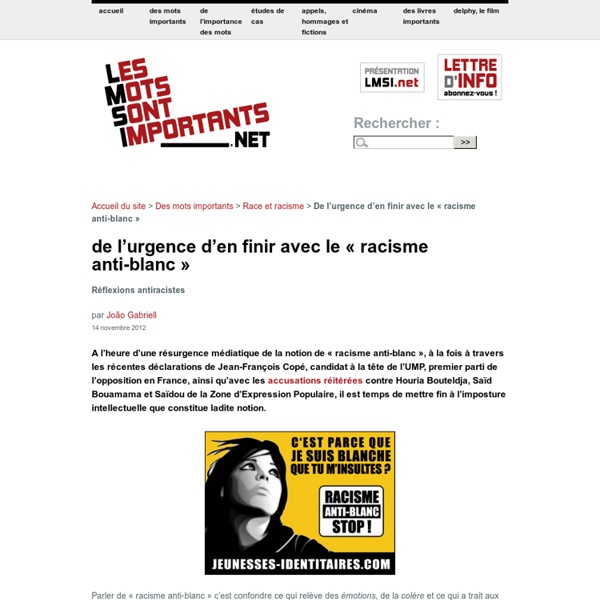 The Invention of the Jewish Nose by Sara Lipton In 1940 the Nazis released a propaganda film called The Eternal Jew. The film claimed to show the Jews in their “original state,” “before they put on the mask of civilized Europeans.” Stagings of Jewish rituals were interspersed with scenes of yarmulke- and caftan-wearing Jews shuffling down crowded alleys, all meant to show the benighted nature of Jewish life. Coming Out as Biracial — Human Parts A few months ago, I not-so-subtly asserted myself as biracial while having dinner with a new coworker. “I’m a Capricorn,” she’d said. “Yeah…my mom’s black,” I responded (not verbatim, but the exchange was similar). Whoa.

How the Tariq Ramadan Scandal Derailed the #Balancetonporc Movement in France Soon after the #MeToo movement formed in the United States, in response to the Harvey Weinstein scandal, #balancetonporc (“expose your pig”) erupted in France. The effect has been an unprecedented blow to what Sabrina Kassa has described, in Mediapart, as the “patriarchal belly” of a country where harassment and other sexual crimes have often been concealed, or explained away, by a Gallic rhetoric of flirtation and libertinism. In 2008, Dominique Strauss-Kahn, who was the managing director of the International Monetary Fund, was subjected to an internal I.M.F. inquiry over allegedly coercing a subordinate to have sex with him.

My White Privilege. My White Privilege. I hear you. I get it. I was just like you. Color blind. Humanist. 20 Photos That Change The Holocaust Narrative Victims. Helpless. Downtrodden. That’s the narrative that’s been spread about Jews for the last 70 years since the Holocaust. We’ve embraced it to our detriment. We can’t seem to address antisemitism without running to the world and screaming that we’re being persecuted, rather than standing up strongly in defiance, aware of our own inner strength.

Black culture isn't the problem - systemic inequality is The idea that it is black folks and our supposedly immoral and savage culture that creates our disproportionate rates of poverty and imprisonment is everywhere: cop shows, news media, movies set in black neighborhoods and high-school social studies classes have all perpetuated this misconception. And some are now using this old, false idea to disparage Black Lives Matter, saying that the real problem facing black communities isn’t police violence, racist oppression or economic exploitation but “black-on-black crime”. We hear this all over the place, from news columnists to Ray Lewis to Rudy Giuliani – and, most recently, reiterated by Bill Clinton. It’s asinine, this argument that modern civil rights movements like Black Lives Matter should stop talking about actual problems in favor of apocryphal ones. During the civil rights movement there was much more homicide in the black community than there is now — black-on-black crime is shrinking.