Straight White Male: The Lowest Difficulty Setting There Is 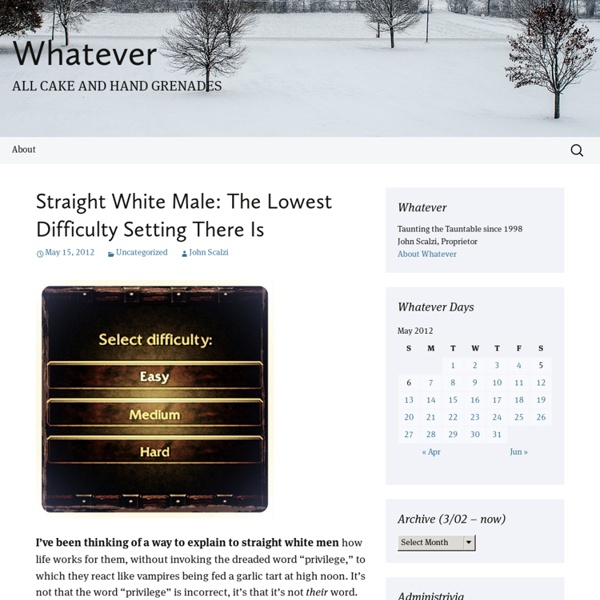 I’ve been thinking of a way to explain to straight white men how life works for them, without invoking the dreaded word “privilege,” to which they react like vampires being fed a garlic tart at high noon. It’s not that the word “privilege” is incorrect, it’s that it’s not their word. When confronted with “privilege,” they fiddle with the word itself, and haul out the dictionaries and find every possible way to talk about the word but not any of the things the word signifies. So, the challenge: how to get across the ideas bound up in the word “privilege,” in a way that your average straight white man will get, without freaking out about it? Being a white guy who likes women, here’s how I would do it: Dudes. Okay: In the role playing game known as The Real World, “Straight White Male” is the lowest difficulty setting there is. This means that the default behaviors for almost all the non-player characters in the game are easier on you than they would be otherwise. Oh, and one other thing.

Two Sexes Are Not Enough By Dr. Anne Fausto-Sterling Posted 10.30.01 NOVA In this excerpt from her recent book Sexing the Body: Gender Politics and the Construction of Sexuality, Brown University biologist and historian Anne Fausto-Sterling argues for a redefinition of our two-sex-only world. My Mother Told Me So I attended high school in a small Southern college town during the period of federally mandated desegregation in the mid 1960s. Chapel Hill’s approach to “integrating” its school system was to close the historically white and Black schools and transfer the students from both schools into a newly constructed building on the edge of town. This new school retained the name of the white school, Chapel Hill High, the name of the white school teams and the team mascot. The principal of the white school kept her position; Lincoln’s principal was hired as the vice-principal. All of the white teachers moved into the “integrated” school, while the jobs of most of the Black teachers were terminated.

Explaining White Privilege to a Broke White Person... Years ago, some feminist on the internet told me I was "Privileged." "THE FUCK!?!?" I said. I came from the kind of Poor that people don't want to believe still exists in this country. Have you ever spent a frigid northern Illinois winter without heat or running water? I have. “Lowest Difficulty Setting” Follow-Up It’s been a couple of days since I’ve posted the “Lowest Difficulty Setting” piece, and it’s been fun and interesting watching the Intarweebs basically explode over it, especially the subclass of Straight White Males who cannot abide the idea that their lives play out on a fundamentally lower difficulty setting than everyone else’s, and have spun themselves up in tight, angry circles because I dared to suggest that they do. Those dudes are cracking me up, and also making me a little sad. There have been some general classes of statement/questions about the piece both on the site and elsewhere on the Internet, that I would like to address, so I’ll do that here. Understand I am paraphrasing the questions/statements. In no particular order: 1.

Four Charts That Prove Obama's Right About Being Black In America By Annie-Rose Strasser "Four Charts That Prove Obama’s Right About Being Black In America" (Creidt: Shutterstock) On Friday, President Obama gave a personal, emotional speech about the killing on Trayvon Martin, in which he spoke extensively on the broader issue of race in the United States. 12 things white people can do now because Ferguson - Quartz As we all know by now, Michael Brown, an unarmed black teenage boy, was gunned down by the police while walking to his grandmother’s house in the middle of the afternoon. For the past few days my Facebook newsfeed has been full of stories about the incidents unfolding in Ferguson, Missouri. But then I realized something.

The Distress of the Privileged This time, though, it doesn’t work. No wife, no kids, no food. Confused, he repeats the invocation, as if he must have said it wrong. After searching the house, he wanders out into the rain and plaintively questions this strangely malfunctioning Universe: “Where’s my dinner?” Girl soldiers face tougher battle on return to civilian life Girl soldiers are often thought of only as "sex slaves", a term that glosses over the complex roles many play within armed groups and in some national armies. This thinking contributes to their subsequent invisibility in the demobilisation processes. In fact, girls are frequently the most challenging child soldiers to rehabilitate. The broad categorisation of girl soldiers as victims of sexual abuse obscures that they are often highly valued militarily. While sexual abuse is believed to be widespread, girls' vulnerability may vary, as attitudes towards women differ extensively across militias. In Colombia, the Marxist-leaning groups the Revolutionary Armed Forces of Colombia (Farc) and National Liberation Army (ELN) treated female soldiers as equal to males, while rightwing paramilitary groups were known to embrace gender stereotypes.

DERAIL USING PERSONAL ATTACKS - Derailing For Dummies You Just Enjoy Being Offended Closely related to the above point, it’s another critical element of a successful derailing You really need to make sure the marginalized person knows you consider their issues to be completely trivial. It’s insensitive in the extreme – it also exemplifies your lack of awareness and empathy. By demonstrating you have absolutely no concept of what a particular issue or point may mean to them both within their conversation with you and beyond it, you get to show off just how cocooned and protected in Privilege® you really are. The fact is, many marginalized person go out of their way to avoid these sorts of debates and confrontations because it’s such a painful and unpleasant experience.

The Economic Impact of School Suspensions The reasons for such setbacks have less to do with student behavior, the report's authors argue, than with disproportionate and overly punitive disciplinary practices that remove African-Americans from classes for minor and subjective infractions (examples include violations of dress code or even wearing natural hairstyles). "Traditional" middle-class notions of femininity, which value passivity in girls, can clash with stereotypical images of African-American females as loud, assertive, and provocative, and generate differing punishments for similar conduct, the authors note. Subjective offenses like "disobedience" or "disruptive behavior" may signify little more than a student's failure to conform to dominant gender norms or fit a teacher's view of what constitutes appropriate "feminine" behavior. Rosalind Wiseman, a best-selling author and educator, certainly sees the discipline gap in those terms.

I am racist, and so are you. And the sooner we both acknowledge this, the sooner we can begin to address the problem. So let’s talk. “Wait just a minute here, Rachel. How Our Brains Perceive Race This post first appeared at Mother Jones. Hiphop dance troupe at Pacific Northwest Black Community Festival, Seattle, 2010. (Photo: Joe Mabel/flickr CC 2.0) “You’re not, like, a total racist bastard,” David Amodio tells me. He pauses. “Today.”

Sure, Whites Are Privileged—but Not Me Personally! - Pacific Standard Following the riots in Missouri and Maryland, and the recent church massacre in South Carolina, Americans are—however reluctantly—talking again about racial inequality. This important dialogue is hampered, however, by the unwillingness of many whites to embrace the obvious: The fact they enjoy certain advantages based on the color of their skin. As a white man, I'm not thrilled to get pulled over by a cop, but I'm not terrified, either. Nor am I nagged by the stress-inducing feeling others see me as a threat or an imposter.