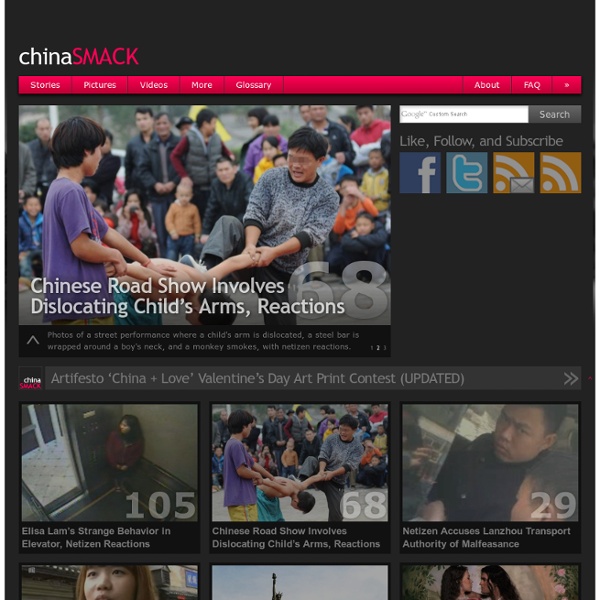 Taiwanese netizen reactions to prominent media commentator Li Ao criticizing the the student protesters of the "Sunflower Movement" as having no "pubic hair", Chinese netizen reactions to a New York Times article that says China's efforts in the search for the missing Malaysian plane is hurting more than helping. Translated Chinese netizen reactions to the unflattering portrayal of Chinese "tuhao" (nouveau riche) in "Hotel King", a "K-drama" (Korean TV serial drama). Chinese villagers protesting the forced relocation of a 200-year-old tree to make way for a highway are hurt in a clash with local government, police, militia. Chinese netizen reactions to photos of the interracial marriage, commenting on social and cultural differences, sexism, discrimination, and racist prejudices. A Chinese police officer dining at a Pizza Hut with his family in Ziyang, Sichuan was stabbed after an argument/fight with a group of men over queue cutting.

2010 South Africa World Cup, “Made In China” From NetEase: South Africa World Cup, “Made In China” The World Cup uses balls made in a Jiujiang City [in Jiangxi province] “sweatshop”? The World Cup mascot is from Yiwu City [in Zhejiang province]? 60 million World Cup condoms were Chinese produced? Yes, China uses this way to “participate” in the South Africa World Cup… Chinalogue on environment "中外对话"是世界上致力于环境问题的第一个完全双语网站。气候变化、物种消亡、污染、水资源匮乏以及环境破坏等问题并不仅仅局限在某一国之内，而是全世界所有居民都要面临的挑战， 而正在崛起的中国给他们带来一个新的紧迫任务。应对上述这些挑战需要全世界达成共识，并且共同努力，而我们"中外对话"网站的目标正是促进这种共识的达成。 "中外对话"致力于发布高质量文章，提供双语信息，促进直接对话，为我们共同面临的环境挑战寻求解决方案。 China is growing fast and, as it grows, it is faced with urgent environmental challenges. Climate change, species loss, pollution, water scarcity and environment damage are not problems confined to one country: they are challenges that concern all the world's citizens, but the rise of China gives them a new urgency.

Digital Media in China - Digital Media Asia China Infographic China or also known as the People's Republic of China is the most populous country on the planet with an estimated 1.349 billion people.[1] Located in East Asia, it is a single-party state governed by the Communist Party of China (CPC).[2] In the early 20th centuries, the country was beset by civil unrest, major famines, military defeats, and foreign occupation. China Pilots reveal death-defying ordeal as engines failed on approach to Chek Lap Kok When both of Flight CX780’s engines failed on approach to Chek Lap Kok, tragedy looked certain to its pilots, who hadn’t trained for such an emergency. However, outstanding airmanship led to a safe – if not smooth – landing for the 322 people on board.

e-collective “From a deep pool of blue ink rises an image…” – this is written on Blueprint‘s Neocha.com homepage, a digital collective that describes itself as a Chinese creative group with no artistic bounds. In an “Internet world” filled with many options for exploring different kinds of creative content, we find ourselves frequently entering Blueprint’s creative world. Their distinctive style comes from the ambient / “lowercase” electronic sound they produce as well as their visual works, which exude a subtle mysticism.

Fleming: WoM China Mogujie.com launched a new online product, “ Free Group Purchase ”, at 5 p.m. on the 1st of March, encouraging users to initiate a group purchase on any product they want. This “C2B” group purchase would be achievedas long as they round up enough participants. So far, more than 15,000 group purchases have been started, 100 of which have been successful. Social platform meishixing.com has at last launched a web version.

China Philanthropy While no one event rocked China’s social sector in 2013, each change in policy making the NPO registration process less complex and founding of another foundation summed up together equaled great forward movement for the Chinese philanthropic sector. With the start of a new lunar year, the media and many organizations have published their roundups of the most important events from 2013 in China’s social sector. We at SVG have put together a roundup of the roundups to help you recap the events of 2013 and put them into perspective as we head into another year. Top 10 Charity Events 2013 (Chinese Only). China Philanthropy Times

China's Consumer Market: explained Just finished the book, Chocolate Fortunes: The Battle for the Hearts, Minds, and Wallets of China’s Consumers, by Lawrence L. Allen. It’s a very good book. The book is about the competition between Hershey’s, Mars, Ferraro Rocher, Nestle and Cadbury for the Chinese consumer. Creme de la Creme On April 13, 2014, Abdulbasit Ablimit, a 17-year-old from a small town near Aqsu, was shot twice. It appears he had run a red light on an electric scooter and, rather than stop and pay a fine, he had fled. According to his friends, he was gunned down three kilometers later. The official state narrative, posted a few days after the incident, says he attacked the police officers with stones, tried to grab their guns, and so on.

Marketing in China 1: Think Local Act Local When more than 300 people attired in red and blue jackets with the words "I Love China" emblazoned over them lined up for the raising of the national flag at the world famous Tian An Men Square in several winter mornings of 1996, one would expect their faces would be all be Chinese. Their whole-hearted explosive singing of the Chinese National Anthem with the raising of the flag each morning made them sound like a squad from the local cadet academy. Yet many in this group were foreigners - including Americans. The early morning choristers were on training in Beijing for more than 10 days as part of their company's corporate culture development program.

Marketing in China: Adaptation vs. Standardization Details Published: June 15, 2012 Chasing China's Shoppers (Wall Street Journal) By now, most leading companies realize they can no longer ignore the Chinese market. While it is currently a significant market in terms of the number of customers, its potential to grow in terms of purchasing volume is even more significant as the income of Chinese consumers continues to rise.