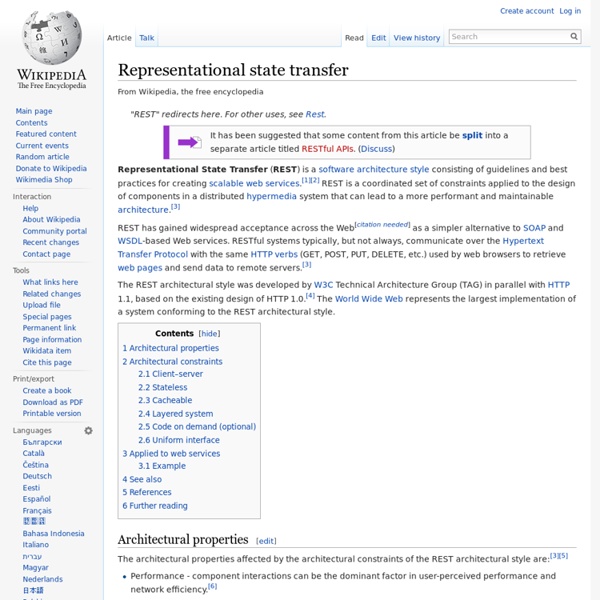 Representational State Transfer (REST) is a software architecture style consisting of guidelines and best practices for creating scalable web services.[1][2] REST is a coordinated set of constraints applied to the design of components in a distributed hypermedia system that can lead to a more performant and maintainable architecture.[3] REST has gained widespread acceptance across the Web[citation needed] as a simpler alternative to SOAP and WSDL-based Web services. RESTful systems typically, but not always, communicate over the Hypertext Transfer Protocol with the same HTTP verbs (GET, POST, PUT, DELETE, etc.) used by web browsers to retrieve web pages and send data to remote servers.[3] The REST architectural style was developed by W3C Technical Architecture Group (TAG) in parallel with HTTP 1.1, based on the existing design of HTTP 1.0.[4] The World Wide Web represents the largest implementation of a system conforming to the REST architectural style. Architectural properties[edit]

6LowApp The 6LowApp activity of the IETF coordinates work in the IETF to specify application (as well as possibly transport, security and operations) protocols for constrained nodes and networks, the Wireless Embedded Internet. 6LowApp is not itself an IETF Working Group, but is intended to result in the creation of IETF Working Groups. In the 6LowApp activity, definition of work will be carried out as well as initial work leading up to specifications. CoRE Working Group ¶ The first result of the 6lowapp activity has been the CoRE working group, which met for the first time at IETF77. Please see ​ for more information about the CoRE WG. HATEOAS The HATEOAS constraint decouples client and server in a way that allows the server functionality to evolve independently. Details[edit] A REST client enters a REST application through a simple fixed URL.

Hacking lessons for teens reduce security threats It might sound strange, but every industry and profession could benefit from an employee as creative, resourceful, and motivated as a hacker. Hackers can teach themselves how things work and how groups of things work together. Hackers know how to modify things—to adjust, personalize, and even improve them. And it is the hacker whose skillset is diverse, unique, and powerful enough to be dangerous in the hands of the wrong person. Enter ISECOM—a non-profit, open source research group focused on next-generation security and professional security development and accreditation—and its popular project, Hacker Highschool. Studies have shown that an amateur in any particular field is most likely to entertain the self-delusion that he knows enough to master it.

SupportFu Developers Introduction SupportFu is a fully hosted solution to manage email and twitter based customer support. We provide a REST API built on pragmatic RESTful design principles. Our API uses resource-oriented URLs that leverage built in features of HTTP, like authentication, verbs and response codes. All request and response bodies are JSON encoded, including error responses. 6LoWPAN 6LoWPAN is an acronym of IPv6 over Low power Wireless Personal Area Networks.[1] 6LoWPAN is the name of a concluded working group in the Internet area of the IETF.[2] The 6LoWPAN concept originated from the idea that "the Internet Protocol could and should be applied even to the smallest devices,"[3] and that low-power devices with limited processing capabilities should be able to participate in the Internet of Things.[4] The 6LoWPAN group has defined encapsulation and header compression mechanisms that allow IPv6 packets to be sent to and received from over IEEE 802.15.4 based networks.

How to Create a REST Protocol December 01, 2004 Note: In this inaugural article of Joe Gregorio's new column, The Restful Web, he explains how to use the REST architectural style to create an application protocol with web-like properties. Future columns will offer additional REST-based applications and analyses. — Editor If you follow web services, then you may have heard of REST.

Hacker Profiling Project (HPP) This is the science of criminal profiling as applied to the world of hacking. Research related to criminal and hacker profiling has been limited to a single point of view: the criminal analysis of the computer intrusion on one side and the technical analysis of the computer intrusion on the other side. In no case has there been a synergistic approach of those two points of view. The Hacker Profiling Project (HPP) is the means to combine these points of view to define a core methodology which will allow us to profile the attacker based on their techniques in computer-based attacks. This research project aims to identify the real behaviors of each actor through particular technological environments and the social culture of hackers for better identifying their reasons for attacks, the true modus operandi, and to determine better countermeasures to improve security.

Best Practices for Designing a Pragmatic RESTful API Your data model has started to stabilize and you're in a position to create a public API for your web app. You realize it's hard to make significant changes to your API once it's released and want to get as much right as possible up front. Now, the internet has no shortage on opinions on API design. But, since there's no one widely adopted standard that works in all cases, you're left with a bunch of choices: What formats should you accept? How should you authenticate?

Constraints The REST architectural style describes the following six constraints applied to the architecture, while leaving the implementation of the individual components free to design: Client–server Stateless Cacheable Layered system Code on demand (optional) Uniform interface The only optional constraint of REST architecture is code on demand. If a service violates any other constraint, it cannot strictly be referred to as RESTful. Complying with these constraints, and thus conforming to the REST architectural style, will enable any kind of distributed hypermedia system to have desirable emergent properties, such as performance, scalability, simplicity, modifiability, visibility, portability and reliability. by vikasjee Dec 16

The Concept: The client begins sending requests when it is ready to make the transition to a new state. While one or more requests are outstanding, the client is considered to be in transition. The representation of each application state contains links that may be used next time the client chooses to initiate a new state transition. The name "Representational State Transfer" is intended to evoke an image of how a well-designed Web application behaves: a network of web pages (a virtual state-machine), where the user progresses through the application by selecting links (state transitions), resulting in the next page (representing the next state of the application) being transferred to the user and rendered for their use. by vikasjee Dec 16