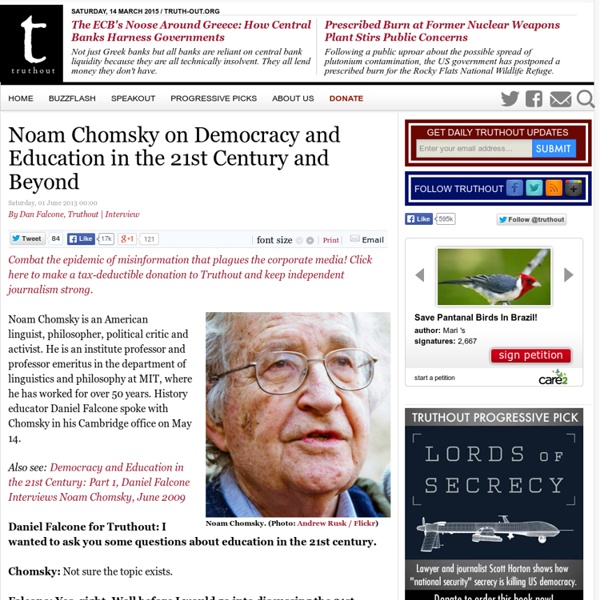 Combat the epidemic of misinformation that plagues the corporate media! Click here to make a tax-deductible donation to Truthout and keep independent journalism strong. Noam Chomsky. (Photo: Andrew Rusk / Flickr ) Noam Chomsky is an American linguist, philosopher, political critic and activist. He is an institute professor and professor emeritus in the department of linguistics and philosophy at MIT, where he has worked for over 50 years. Also see: Democracy and Education in the 21st Century: Part 1, Daniel Falcone Interviews Noam Chomsky, June 2009 Daniel Falcone for Truthout: I wanted to ask you some questions about education in the 21st century. Chomsky: Not sure the topic exists. Falcone: Yes, right. Chomsky: That's an interesting question. And these were independent farmers. And there was more to it than that. So, it's kind of a mixture. Right now, we happen to be in a general period of regression, not just in education. The other is what's happening to teachers like you.

After Your Job Is Gone Do you have a job? Do you like having a job? Then I have some bad news for you. The Guardian is worried “today’s technologies are going to remove people from economic activity completely.” Wrong tense: the right question is what is happening. It’s the same around the world. Think you’re safe because you don’t work in a factory? Retail? Retail now employs fewer people than it did in 1999. Even lawyers, financiers, and surgeons aren’t safe. Oh, you work in tech? It’s like the global economy has forked into two tracks: tech, which boomed right through the Great Recession, and just keeps booming on, and nobody can hire enough engineers…and everyone else. It’s happening right in the heart of Silicon Valley. Which is great for those of us in tech, right? I want to stress again that this is only the beginning — that as software eats the world, as Marc Andreessen put it, this two-track economy will grow ever more divergent around the planet. At least I hope so.

Why Anti-Authoritarians are Diagnosed as Mentally Ill (Note: Read Bruce Levine’s latest post: Anti-Authoritarians and Schizophrenia: Do Rebels Who Defy Treatment Do Better? In my career as a psychologist, I have talked with hundreds of people previously diagnosed by other professionals with oppositional defiant disorder, attention deficit hyperactive disorder, anxiety disorder and other psychiatric illnesses, and I am struck by (1) how many of those diagnosed are essentially anti-authoritarians, and (2) how those professionals who have diagnosed them are not. Anti-authoritarians question whether an authority is a legitimate one before taking that authority seriously. Evaluating the legitimacy of authorities includes assessing whether or not authorities actually know what they are talking about, are honest, and care about those people who are respecting their authority. Some activists lament how few anti-authoritarians there appear to be in the United States. Why Mental Health Professionals Diagnose Anti-Authoritarians with Mental Illness

Manga and anime declared good study tools for kids Children’s books and television shows these days are nothing compared to the ones that many of us had growing up. At least that’s what we tell ourselves. I think back fondly on those days of watching Rugrats and Scooby Doo marathons and scoff at the thought of modern-age children rotting their brains with Spongebob and Annoying Orange. But the fact of the matter is that letting kids subject themselves to those books and animations is important to the development of reading comprehension and critical thinking skills, though the shows now seem like garbage to our fully-developed minds. In Japan, the same sort of issue arises with kids becoming obsessed with manga and anime. Parents may try to insist that their children put away the comics and pick up a real book. Let’s start with the manga. Every time a child rereads their manga of choice, there is something new that they discover. But what about anime? In addition, anime can drastically broaden a child’s vocabulary. Like this:

What is your absolute worst "meeting the parents" story? : AskReddit P2PU How we test ideas about learning. Current projects Use the drop down list above to see all current projects. Here are a few examples: The Citizen Science project makes scientific ideas and practice accessible to everyone.The Open Masters creates a template for anyone to pursue their own semi-formal study.The Mechanical MOOC automates a massive course experience. What’s a project? Projects take many forms- such as organizing face to face meetings around an existing course, building a community of ambassadors, conducting research experiments, running experimental courses, or building technology and tools- but all projects: Create something new- a tool, content, experience, model, etc.Test a hypothesis or question, or demonstrate a new way of doing things.Openly share what they are creating and learning. Projects are not afraid to fail, but they don’t whimper. P2PU projects are an important part of what we do, and they are rooted in our values of openness, community, and peer learning.

Studying vs learning There is a fundamental difference between studying and learning in the field of language learning. Being able to speak a language is a skill. A skill is something that is achieved over time through trial and error. Do you remember the first time that you magically started to find the balance on the saddle of your bike? Now, let us suppose that my very enthusiastic father wanted to teach me how to ride a bike by constantly giving me instructions on how to do it. A bike remains upright when it is steered so that the ground reaction forces exactly balance all the other internal and external forces it experiences, such as gravitational if leaning, inertial or centrifugal if in a turn, gyroscopic if being steered, and aerodynamic if in a crosswind. The rider applies torque to the handlebars in order to turn the front wheel and so to control lean and maintain balance. Studying is an act of deliberate learning. Mark and John both get a new language course. Mark examines the book. (*) Footnote:

Australians of Reddit, what's an animal in North America that scares the fuck out of you? : AskReddit Reading, Writing, and Self-Esteem — Emerging Ideas By almost every measure, Cupertino High School in northern California is a successful place. Perched in the heart of Silicon Valley, Cupertino sent 85 percent of its senior class to college in 2009, and hundreds of its students take advanced placement classes each year. But some of Cupertino’s kids are doing better than others. On average, students there excel on California’s Academic Performance Index. The target is 800; Cupertino students scored 893. Nationwide, the numbers are even more striking: 94 percent of white young adults have earned a high school degree by age 24, compared to only 87 percent of blacks and 78 percent of Latinos. Recently, a group of social and cognitive psychologists have hypothesized that at least some academic disparities spring from toxic stereotypes that cause ethnic-minority and other students to question whether they belong in school and can do well there. Cohen and his colleagues tracked the original group of students through the eighth grade.

Don't Go Back to School: How to Fuel the Internal Engine of Lifelong Learning by Maria Popova “When you step away from the prepackaged structure of traditional education, you’ll discover that there are many more ways to learn outside school than within.” “The present education system is the trampling of the herd,” legendary architect Frank Lloyd Wright lamented in 1956. So, in 2012, when I found out that writer Kio Stark was crowdfunding a book that would serve as a manifesto for learning outside formal education, I eagerly chipped in. People who forgo school build their own infrastructures. Reflecting on her own exit from academia, Stark articulates a much more broadly applicable insight: A gracefully executed quit is a beautiful thing, opening up more doors than it closes. But despite discovering in dismay that “liberal arts graduate school is professional school for professors,” which she had no interest in becoming, Stark did learn something immensely valuable from her third year of independent study, during which she read about 200 books of her own choosing:

Scolopendra gigantea Scolopendra gigantea , also known as the Peruvian giant yellow-leg centipede or Amazonian giant centipede , is one of the largest representatives of the genus Scolopendra with a length up to 30 cm (12 in). [ 1 ] It can be found in various places of South America and the Caribbean, where it preys on a great variety of animals, including other sizable arthropods , amphibians , mammals and reptiles . [ 2 ] [ 3 ] These arthropods have surged in popularity among collectors of exotic pets. [ 4 ] They are known to be very aggressive and nervous. [ 2 ] [ 4 ] Description [ edit ] Man holding Scolopendra gigantea The Peruvian giant centipede is among the largest species of centipedes which can regularly reach lengths of 26 cm (10 in) and can be up to 30 cm (12 in) or even more. [ 1 ] In common with other members of the genus Scolopendra , the body of this species has 21 or 23 well-marked sections with each section having one pair of legs. Habitat [ edit ] Distribution [ edit ] Venom [ edit ]

Bloom's Taxonomy of Learning Domains Bloom's Taxonomy was created in 1956 under the leadership of educational psychologist Dr Benjamin Bloom in order to promote higher forms of thinking in education, such as analyzing and evaluating concepts, processes, procedures, and principles, rather than just remembering facts (rote learning). It is most often used when designing educational, training, and learning processes. The Three Domains of Learning The committee identified three domains of educational activities or learning (Bloom, et al. 1956): Cognitive: mental skills (knowledge) Affective: growth in feelings or emotional areas (attitude or self) Psychomotor: manual or physical skills (skills) Since the work was produced by higher education, the words tend to be a little bigger than we normally use. While the committee produced an elaborate compilation for the cognitive and affective domains, they omitted the psychomotor domain. Cognitive Domain Knowledge Comprehension Application Analysis Synthesis Evaluation Next Steps Review