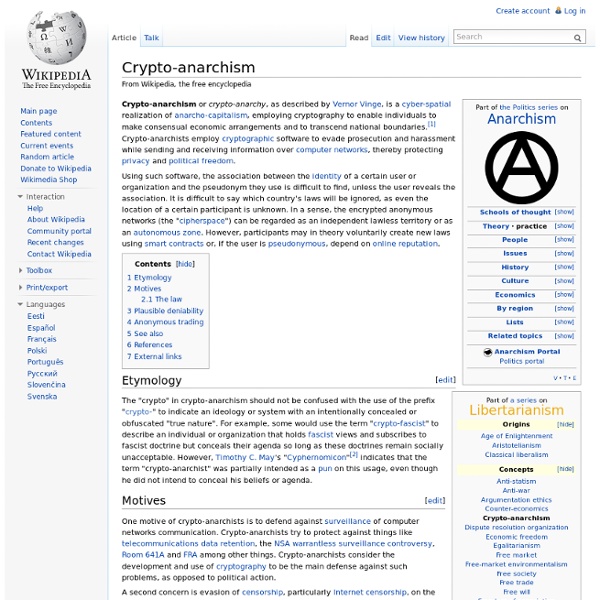 Described by Vernor Vinge, crypto-anarchy is more specifically anarcho-capitalist, employing cryptography to enable individuals to make consensual economic arrangements and to transcend national boundaries. Etymology[edit] The "crypto" in crypto-anarchism should not be confused with the use of the prefix "crypto-" to indicate an ideology or system with an intentionally concealed or obfuscated "true nature". For example, some would use the term "crypto-fascist" to describe an individual or organization that holds fascist views and subscribes to fascist doctrine but conceals their agenda so long as these doctrines remain socially unacceptable. Motives[edit] Also, the technical challenge in developing these cryptographic systems is tremendous, which interests some programmers into joining the projects. Cryptography and law[edit] Plausible deniability[edit] Crypto-anarchism relies heavily on plausible deniability to avoid censorship. Anonymous trading[edit] Ukash is an e-money network. Related:  Security

After months of speculation, T-Mobile finally ditches cellphone contracts T-Mobile has finally done the unthinkable—it’s killed off its contracts entirely. The German-owned carrier has historically struggled as America’s number four provider. Since its merger with number five carrier MetroPCS (whose entire business model is prepaid), the newly resurgent T-Mobile said it planned on eliminating carrier subsidies. T-Mobile's offering, dubbed “Simple Choice,” makes the company the first of the big four US-based carriers to drop one-year or two-year contracts in favor of purely month-to-month-based arrangements. Customers can bring their own device or can pay an additional fee to buy a new phone—essentially shifting the carrier subsidy entirely to the consumer. Presumably, on a month-to-month contract, if a customer wanted to switch carriers before the two years, she would have to either buyout the remainder of the contract or return the phone. It’s likely the company is staying mum in light of its New York launch event planned for Tuesday.

Guest Post: “The Ultimate Guide for Anonymous and Secure Internet Usage” Wednesday, April 11th, 2012 at 7:29 pm. another fine guest post by some random pastebin-using entity on the internet(s): This is a guide with which even a total noob can get high class security for his system and complete anonymity online. But its not only for noobs, it contains a lot of tips most people will find pretty helpfull. Table of Contents: 1. By the time you are finished reading and implementing this guide, you will be able to securely and anonymously browse any website and to do so anonymously. In order to prepare this guide for you, I have used a computer that is running Windows Vista. I have written this guide to be as newbie friendly as possible. It is highly recommended that you close *ALL* applications running on your computer before starting. 1 : Obtaining Tor Browser The first step to becoming secure and anonymous online is to setup and install something called “TOR”. However, TOR by itself is not enough. The second issue is that of human error. So then, let’s begin. 1.

Free Haven From their webpage: The Free Haven Project aims to deploy a system for distributed, anonymous, persistent data storage which is robust against attempts by powerful adversaries to find and destroy any stored data. Google hires frequent Chrome leaker François Beaufort Leaks relating to Google's Chrome browser and Chrome OS desktop projects could soon be coming to an end, after the company snapped up frequent leaker François Beaufort to become its new open-source Chromium evangelist. Sharing the news on Google+, Beaufort says that he will still provide news on upcoming features — albeit in a more official capacity — as well as frequent updates on the "Chrome team and its culture." Early feature leaks may soon become a rarity Before his appointment at Google, Beaufort became well known for his early insight into what the company might be adding to future versions of its software. For Google, it's a win/win situation; not only does it bring on board one of its most vocal Chrome supporters, it also stems the flow of information disclosed by Google engineers in nightly Chrome code reviews.

Part II: How to Be Anonymous Online (for Beginners) | AstroEngineer's Blog If you have significant reason to be concerned about your anonymity online, this installment will not be for you; please wait for the next installment. The methods described in this section are intended only for those who want to add a thin layer of anonymity on top of what they currently have (which is likely almost no anonymity). Off the Shelf Solutions There are quite a few excellent free and paid off the shelf solutions intended to protect your anonymity. The following are some of the popular and common options: JonDonymTor Browser BundleSSH Tunnel (free/paid ssh tunnels)VPNOpen ProxiesXero Bank I’ll attempt to briefly describe each and their role in your protection. JonDonym JonDonym is a brilliant approach to solving much of the problem of anonymity and access. To use JonDonym you download and run JonDo, formerly and sometimes still referred to as Java Anonymous Proxy (JAP). The basic idea behind JonDonym is that you cannot place all your trust in any one entity. Download JonDo XeroBank

Hacktivism Overview[edit] Hacktivist activities span many political ideals and issues. Freenet is a prime example of translating political thought (anyone should be able to speak) into code. Hacktivism is a controversial term with several meanings. Controversy[edit] While some self-described hacktivists have engaged in DoS attacks, critics suggest that DoS attacks are an attack on free speech that they have unintended consequences. Forms of hacktivism[edit] In order to carry out their operations, hacktivists might create new tools; or integrate or use a variety of software tools readily available on the Internet. Notable hacktivist events[edit] The earliest known instance of hacktivism as documented by Julian Assange is as follows:[15]Hacktivism is at least as old as October 1989 when DOE, HEPNET and SPAN (NASA) connected VMS machines world wide were penetrated by the anti-nuclear WANK worm. [...] Related notions[edit] Civic hacking Media hacking[edit] Reality hacking[edit] In fiction[edit] See also[edit]

Is there a better way to upgrade the internet? BitTorrent’s CEO says there is If we persist in thinking of the internet as an information superhighway, then we’ll continue to handle congestion by adding more lanes, via expensive upgrades in the core network, at the edge and at the last mile. The end result of our love affair with connectivity is a losing proposition for ISPs who are forced to upgrade their networks to meet the ongoing demand for broadband without taking enough of a share from the growing internet economy to meet their margins. Or so writes Eric Klinker, in the Harvard Business Review blog, in a solid post about how we’re going to manage the growth of the internet. While Klinker sounds like many a telco-funded astroturfer in his worries about ISP profits, he’s actually the CEO of file sharing site, BitTorrent. And his arguments are worth listening to on both sides of the internet divide — the ISPs and the content companies looking to ride those pipes. Distributed computing systems work with unprecedented efficiency.

Defensive Technology If you are looking for basic technical information on how to protect the privacy of your data — whether it's on your own computer, on the wire, or in the hands of a third party — you've come to the right place. Although we hope you'll have the time to review all of the information in the SSD guide, if you're in a hurry to get to the technical details, this is where you can read articles that will explain: the basics of the relevant technologies, such as the Internet Basics and Encryption Basics articleshow to improve the security of different communication applications, such as your web browsers, email systems and IM clientshow to protect your privacy by using defensive technologies such as Secure Deletion software, File and Disk Encryption software, and virtual private networksthe overarching security threat posed by malware, how to evaluate that threat, and how to reduce it Just remember: technology changes quickly.