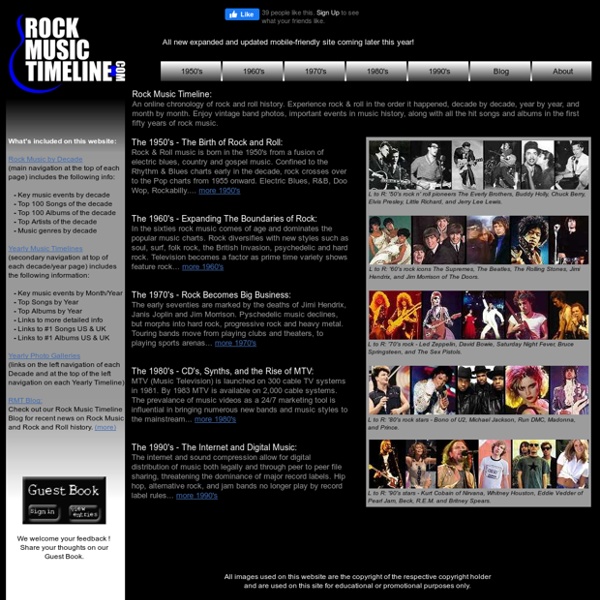 1960's Music played in the 60's Bands groups singers memories from The People History Site The 1960's were a time of upheaval in society, fashion, attitudes and especially music. Before 1963, the music of the sixties still reflected the sound, style and beliefs of the previous decade and many of the hit records were by artists who had found mainstream success in the 1950s, like Elvis Presley, Ray Charles, Dion, and The Everly Brothers. In 1963 and the years to follow, a number of social influences changed what popular music was and gave birth to the diversity that we experience with music today. The assassination of President Kennedy, the escalation of the war in Vietnam and the forward-progress of the Civil Rights Movement all greatly impacted the mood of American culture and the music began to reflect that change.

Creating ToonDoo Cartoons Creating Your First ToonDoo Here is a simple ToonDoo. With the information on this page, you will be able to create this cartoon, or a similar cartoon of your own. We will assume you have already established an account, navigated to and logged in to your account. 1. Click on the Create Your Own! History, Songs, Artists, Rock and roll, also called rock ’n’ roll or rock & roll, style of popular music that originated in the United States in the mid-1950s and that evolved by the mid-1960s into the more encompassing international style known as rock music, though the latter also continued to be known as rock and roll. Britannica Quiz Lifting the Curtain on Composers: Fact or Fiction? Wolfgang Amadeus Mozart wrote no operas. Rock and roll has been described as a merger of country music and rhythm and blues, but, if it were that simple, it would have existed long before it burst into the national consciousness. The seeds of the music had been in place for decades, but they flowered in the mid-1950s when nourished by a volatile mix of black culture and white spending power.

A Brief History of Punk The Foundations of Punk Rock The beginnings of punk rock are often furiously debated. This is partially because everyone has different definition of punk rock, and partially because its foundation stones are found in several places. "Punk Rock" was originally used to describe the garage musicians of the '60's. Great Resources for Teaching Using Comics March , 2014 A few days ago I shared with you here in Educational Technology and Mobile Learning a list featuring some of the best web tools that you can use with your students to create comics. As a teacher you can leverage the power of comics in several ways: you can use them for teaching writing, reading and speaking. Comics are also a good way for students to build and create their stories and share them with others.

Elvis Presley Biography - Elvis Presley Life Story - Official Elvis Biography The incredible Elvis Presley life story began when Elvis Aaron Presley was born to Vernon and Gladys Presley in a two-room house in Tupelo, Mississippi, on January 8, 1935. His twin brother, Jessie Garon, was stillborn, leaving Elvis to grow up as an only child. He and his parents moved to Memphis, Tennessee, in 1948, and Elvis graduated from Humes High School there in 1953. Elvis’ musical influences were the pop and country music of the time, the gospel music he heard in church and at the all-night gospel sings he frequently attended, and the black R&B he absorbed on historic Beale Street as a Memphis teenager.

The Scooterist: Youth Culture - Mods & Rockers 1960s - 1970s Youth Culture - Mods - Late 1950s to Mid 1960s Mod (from modernist) is a subculture that originated in London, England in the late 1950s and peaked in the early-to-mid 1960s. Significant elements of the mod subculture include: fashion (often tailor-made suits); pop music, including African American soul, Jamaican ska, and British beat music and R&B; and Italian motor scooters. The original mod scene was also associated with amphetamine-fuelled all-night dancing at clubs. From the mid-to-late 1960s onwards, the mass media often used the term mod in a wider sense to describe anything that was believed to be popular, fashionable or modern. 40+ Resources for Teaching Using Animation and Comics January 27, 2014 Some of the animation links catalogued here will give educators very basic tools and histories of animation while others have the animation already created and set in motion, it’s just a matter of sharing it with students. Educators need to decide which tool is best for them. If you want to create your own animation from scratch, then you want to go to sites such as Animwork. If you want to select from animation that’s already set up for you then perhaps Explainia makes more sense. 1.

Buddy Holly With his black-framed glasses, sharp suits and tousled hair, Buddy Holly looked like any other earnest young man entering adulthood in the late 1950s. Yet the Lubbock, Texas, native's approach to music was anything but standard. A fluid, nimble guitarist, he brought velocity and intensity to his rockabilly- and rhythm-and-blues-inspired riffs. Holly's voice could also have a gritty edge (see the early hit "Oh Boy!"