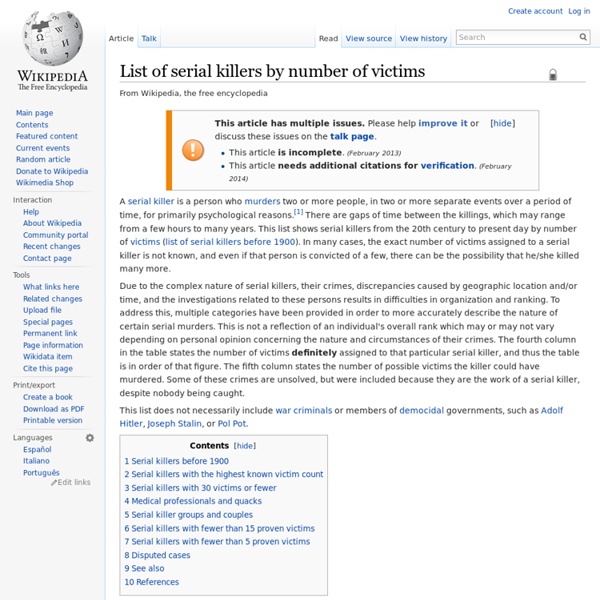 A serial killer is a person who murders two or more people, in two or more separate events over a period of time, for primarily psychological reasons.[1] There are gaps of time between the killings, which may range from a few hours to many years. This list shows serial killers from the 20th century to present day by number of victims (list of serial killers before 1900). In many cases, the exact number of victims assigned to a serial killer is not known, and even if that person is convicted of a few, there can be the possibility that he/she killed many more. Due to the complex nature of serial killers, their crimes, discrepancies caused by geographic location and/or time, and the investigations related to these persons results in difficulties in organization and ranking. To address this, multiple categories have been provided in order to more accurately describe the nature of certain serial murders. Serial killers before 1900 Serial killers with the highest known victim count See also

Edmund Kemper Edmund Emil "Big Ed" Kemper III (born December 18, 1948),[1] also known as "The Co-ed Killer",[2] is an American serial killer and necrophile who was active in California in the early 1970s. He started his criminal life by murdering his grandparents when he was 15 years old.[2] Kemper later killed and dismembered six female hitchhikers in the Santa Cruz area. He then murdered his mother and one of her friends before turning himself in to the authorities days later. Kemper is noted for his imposing physicality and high intelligence, standing 6 ft 9 inches (2.06 m), weighing over 300 pounds (140 kg), and having an IQ in the 140 range. Early life[edit] Kemper had a close relationship with his father and was devastated when his parents divorced in 1957 and he had to be raised by his mother in Helena, Montana. In the summer of 1963, Kemper ran away from home in search of his father in Van Nuys, California. First murders[edit] Kemper's grandmother Kemper's grandfather Later murders[edit] [edit]

David Berkowitz - Wikipedia, the free encyclopedia David Richard Berkowitz (born Richard David Falco, June 1, 1953), also known as the Son of Sam and the .44 Caliber Killer, is an American serial killer convicted of a series of shooting attacks that began in New York City in the summer of 1976. Perpetrated with a .44 caliber Bulldog revolver, he killed six victims and wounded seven others by July 1977. As the toll mounted, Berkowitz eluded a massive police manhunt while leaving brazen letters which mocked the police and promised further crimes. After his arrest by New York City police in August 1977, Berkowitz was indicted for eight shooting incidents. Intense coverage of the case by the media lent a kind of celebrity status to Berkowitz, and observers noted indignantly that he appeared to enjoy it. Berkowitz has been imprisoned since his arrest and is serving six life sentences consecutively. Early life[edit] John Vincent Sanders wrote that Berkowitz's childhood was "somewhat troubled. Crimes begin[edit] Michelle Forman stabbing[edit]

List of collective nouns A skein of geese This is a list of traditional or whimsical collective nouns. The large number of collective nouns in English is based on a tradition of venery (words for groups of animals) which arose in the Late Middle Ages. Standard terms for particular groups are listed first in each group and shown in bold. See also[edit] References[edit] List of Deadly Women episodes Deadly Women is an American television series first aired in 2005 on the Discovery Channel, focusing on female killers. It was originally a mini-series consisting of three episodes: "Obsession," "Greed" and "Revenge". After a two-year hiatus, the show resumed production in 2008 and began airing on the Investigation Discovery channel as a regularly scheduled series. Deadly Women TV series (2005)[edit] Each of the three original episodes covered the cases of four women or groups of women who were united by the central theme of the episode. Episodes[edit] Ep = Episode number within the seasonNo. = Overall episode number Season 1: 2005[edit] Deadly Women TV series (2008–present)[edit] Deadly Women resumed production of Season 2 in 2008, with slight changes. Episodes[edit] Season 2: 2008-2009[edit] Season 3: 2009[edit] Season 4: 2010[edit] Season 5: 2011–2012[edit] Season 6: 2012-2013[edit] Season 7: 2013[edit] References[edit] External links[edit]

Loren Mosher Loren Richard Mosher (September 3, 1933, Monterey – July 10, 2004, Berlin)[2][3] was an American psychiatrist,[3][4]:21 clinical professor of psychiatry,[2][5][6] expert on schizophrenia[5][6] and the chief of the Center for Studies of Schizophrenia in the National Institute of Mental Health (1968–1980).[2][3][5] Mosher spent his professional career advocating for humane and effective treatment for people diagnosed as having schizophrenia[3] and was instrumental in developing an innovative, residential, home-like, non-hospital, non-drug treatment model for newly identified acutely psychotic persons.[2] Biography[edit] Before conceiving Soteria, Mosher supervised a ward in a psychiatric hospital at Yale University as its assistant professor, prescribed neuroleptics and was not “against” them. But by 1968, the year Mosher received the position of director of the Center for Schizophrenia Studies at the NIMH, he got convinced that benefits of neuroleptics were overhyped.[10] Sources[edit]

Raymond Fernandez and Martha Beck Prior to the murders[edit] Raymond Fernandez[edit] Fernandez was born on December 17, 1914 in Hawaii[1] to Spanish parents. Shortly thereafter, they moved to Connecticut. As an adult, he moved to Spain, married, and had four children, all of whom he abandoned later on in life. In 1947, he answered a personal ad placed by Martha Beck. Martha Beck[edit] Martha Beck was born Martha Jule Seabrook on May 6, 1920 in Milton, Florida.[6] Allegedly due to a glandular problem (then a common explanation for obesity), she was overweight and went through puberty prematurely. After she finished school, she studied nursing, but had trouble finding a job due to her weight. She told people that the father was a serviceman she had married, later claiming that he had been killed in the Pacific Campaign. Murders[edit] Fernandez visited Beck and stayed for a short time, and she told everyone that they were to be married. In 1949, the pair committed the three murders for which they would later be convicted.