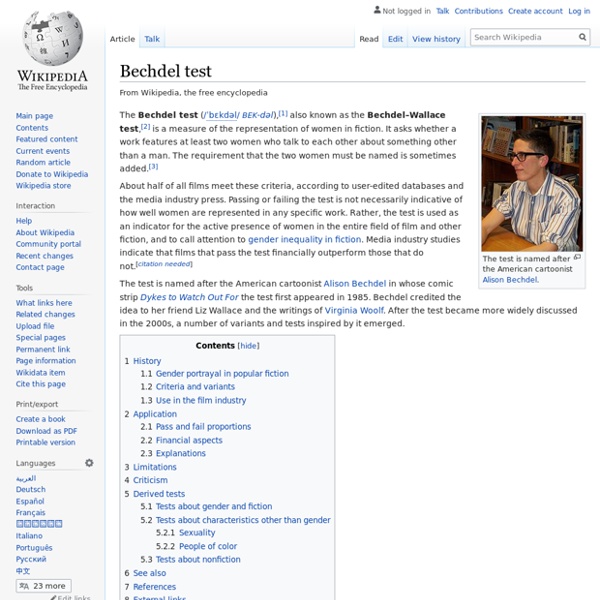 A measure of the representation of women in fiction The Bechdel test ( BEK-dəl),[1] also known as the Bechdel–Wallace test,[2] is a measure of the representation of women in fiction. It asks whether a work features at least two women who talk to each other about something other than a man. The requirement that the two women must be named is sometimes added.[3] About half of all films meet these criteria, according to user-edited databases and the media industry press. Passing or failing the test is not necessarily indicative of how well women are represented in any specific work. The test is named after the American cartoonist Alison Bechdel in whose comic strip Dykes to Watch Out For the test first appeared in 1985. History[edit] Gender portrayal in popular fiction[edit] Female and male characters in film, according to four studies All these relationships between women, I thought, rapidly recalling the splendid gallery of fictitious women, are too simple. ... Criteria and variants[edit] Related:  Movies

Map: This is how far those North Korean missiles can actually reach North Korea displayed what it said was the new KN-08 missile during a military parade in April 2012. (Pedro Ugarte/Getty) North Korea has redeployed some of its missiles to the country's eastern coast, a provocation and implicit warning that it just might carry through on some of its recent threats. How far can those missiles actually reach? We can't say for sure because we don't know what kind of missiles they are. First off, here's a map showing how far North Korea's various missile systems can reach. The Musudan, though tested, is not thought to be particularly accurate. What about the range of the KN-08? New ICBM models aren't like iPhones; you don't just take them out of the box and expect them to function properly. More on North Korea: Is Kim Jong Un being more restrained than we think? Why North Korea’s bomb-grade plutonium plant might be good news Video from inside North Korea's controversial Kaesong Industrial Complex, which it just closed

Transgender women of Paris in the Fifties and Sixties These beautiful photographs of transgender women, in Paris from the late 1950s and early 1960s were taken by Swedish photographer Christer Strömholm, who traveled to Paris in the late-fifties, where he hoped to create a new kind of night-life street photography. Strömholm lived in the Red Light district, around Place Blanche and Pigalle, where he made friends with many of the young transgender women who worked the streets and hotels to make a living. In 1983, Strömholm published many of these photographs in his book Les Amies de Place Blanche. In his introduction to the book he wrote: “This is a book about the quest for self-identity, about the right to live, about the right to own and control one’s body. ...These are images of people whose lives I shared and whom I think I understood. The whole collection can be seen here. Via Buzzfeed, with thanks to Tony Vermillion!

Researchers team up with architects to create bladeless wind electricity generator (Phys.org) —Faculty members at Delft University in the Netherlands have teamed up with architectural firm Mecanoo to develop a new way to generate electricity using wind energy. The result is the Electrostatic WInd-energy CONvertor, (EWICON)—a windmill with no moving mechanical parts. Its creators say that it makes no noise, won't break down or cast a shadow and it won't cause bird deaths—all problems associated with traditional wind turbines. Traditional wind turbines take advantage of moving air to convert kinetic energy into mechanical energy to create electricity. This new windmill uses a different process altogether. It looks rather like a giant tennis racket with an insulated base instead of a hand grip. Deriving electricity from wind has met with some resistance in some parts of the world—to be of real use, turbines must be very large, and whole farms of them constructed. Explore further: Going nuts?

Saul Bass Saul Bass (/sɔːl bæs/; May 8, 1920 – April 25, 1996) was an American graphic designer and Academy Award winning filmmaker, best known for his design of motion picture title sequences, film posters, and corporate logos. Bass designed some of the most iconic corporate logos in North America, including the Bell System logo in 1969, as well as AT&T's globe logo in 1983 after the breakup of the Bell System. He also designed Continental Airlines' 1968 jet stream logo and United Airlines' 1974 tulip logo, which became some of the most recognized airline industry logos of the era. §Early life[edit] §Film title sequences[edit] Bass became widely known in the film industry after creating the title sequence for Otto Preminger's The Man with the Golden Arm (1955). Screenwriter Nicholas Pileggi said of Saul and Elaine Bass, "You write a book of 300 to 400 pages and then you boil it down to a script of maybe 100 to 150 pages. §Selected film title sequences[edit] §Logos and other designs[edit] §1950s[edit]

This Movie Changed Me Newsletter This Movie Changed Me is our podcast about how movies teach, connect, and transform us. This fall, we’re introducing a new accompanying newsletter for listeners. Each Wednesday while the season is airing (starts Tuesday, Sept. 3), you’ll get a note from host Lily Percy along with a synopsis for the week’s movie, reviews, artwork, trailers, and more. By filling out this form, you consent to hear from The On Being Project via email.

Before European Christians Forced Gender Roles, Native Americans Acknowledged 5 Genders It wasn’t until Europeans took over North America that natives adopted the ideas of gender roles. For Native Americans, there was no set of rules that men and women had to abide by in order to be considered a “normal” member of their tribe. In fact, people who had both female and male characteristics were viewed as gifted by nature, and therefore, able to see both sides of everything. “Each tribe has their own specific term, but there was a need for a universal term that the general population could understand. The “Two Spirit” culture of Native Americans was one of the first things that Europeans worked to destroy and cover up. “..Must be extinguished before it can be more fully recorded.” However, it wasn’t only white Europeans that tried to hide any trace of native gender bending. One of the most celebrated Two Spirits in recorded history was a Lakota warrior aptly named Finds Them And Kills Them. Paid Content:Paid Content:Paid Content:Paid Content:Paid Content:

Ouya review: can an indie console take on Sony and Microsoft? 10inShare Jump To Close Sony, Microsoft, and Nintendo may no longer be the only names that matter in gaming, but the "big three" is still very much alive in people's minds. Maybe that's why Ouya struck such a chord when it hit Kickstarter last July. Ouya's always said all the right things. Little boxes Little boxes Ouya hands-on pictures Previous Next View full Gallery Ouya makes a big deal of the fact that Yves Behar designed its console, but I don't really know why. The Ouya's ports are grouped on the back, and include pretty much everything you'd expect: full-size HDMI and USB, Ethernet, Micro USB, and a power jack. Inside the box is basically a cutting-edge Android smartphone. Controller I don't really care what a console looks like — I'd like it to be small and beautiful, but as I type this there's a large and hideous Xbox 360 prominently displayed on my TV stand next to its equally large, equally hideous power brick. Android on my TV Android on my TV Needing a halo... or Halo Hackability