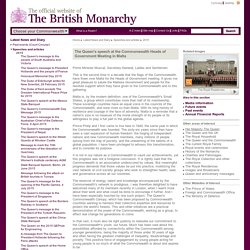 This is the second time in a decade that the flags of the Commonwealth have flown over Malta for the Heads of Government meeting. It gives me great pleasure to salute the Maltese Government and people for the resolute support which they have given to the Commonwealth and to this gathering. Malta is, by the modern definition, one of the Commonwealth's Small States, a group which constitutes more than half of its membership. The Queen's speech at the Commonwealth Heads of Government Meeting in Malta. Head of CW, Queen: Malta is by definition one of the CW small states, which have equal say in CW #CHOGM2015. The Queen and The Duke of Edinburgh arrive with the Prime Minister of Malta for the Opening Ceremony of #CHOGM2015. The Prince of Wales and The Duchess of Cornwall have arrived for the Opening Ceremony of #CHOGM2015. 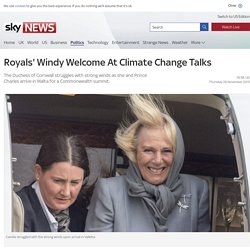 Accompanied by his wife Camilla, the Queen and the Duke of Edinburgh, Charles is co-hosting a Commonwealth summit where climate change is set to dominate the agenda. As the Royal party arrived - Charles and Camilla in one aircraft and the Queen and Prince Philip in another just minutes later - violent rainstorms and almost hurricane-force winds disrupted the official welcome. Camilla, in particular, appeared to struggle to cope with the strong winds which battered the usually sunny holiday island all day.

The Duchess of Cornwall takes cover from the freak weather She had difficulty getting out of her plane and then attempted to protect her hair with an umbrella which covered her face. The Maltese hideaway where the Queen 'spent her happiest days' Tonight The Prince of Wales attended the launch of @PrincesTrust International. #RoyalVisitMalta. Twitter. A beaming Queen arrives apparently for her final state visit #Malta @chogm2015mt #Royals. Google Traduction. The official presentation of gifts included English lace from The Queen to @presidentMT #RoyalVisitMalta. The Queen and The Duke of Edinburgh have arrived at San Anton Palace at the start of the #RoyalVisitMalta.

Prince Harry describes 'gaping hole' in his life after mother's death 'that could never be filled' Main page content. 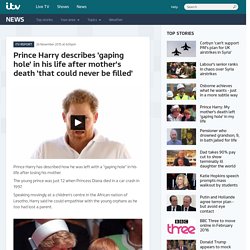 Prince Harry opens African charity building named after mother Diana. Prince Harry said losing his mother left a "gaping hole that could never be filled" Mmonwealth summit: what does the Queen mean to you? The Commonwealth Heads of Government Meetings (CHOGM) could be the last summit for Her Majesty after Buckingham Palace said the Queen is "not undertaking long haul travel" for future events. 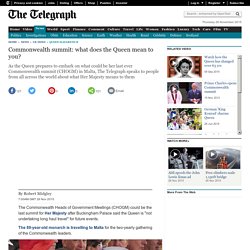 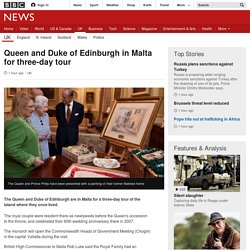 Prince Harry and Prince Seeiso founded @Sentebale together to help #LesothosChildren, many affected by HIV/AIDS. The Welcome Centre will welcome kids as they arrive at the centre - it has been named after Olga Powell. Tributes to the most important women in his life #PrinceHarry @Sentebale #Lesotho. Prince Harry arrives in Lesotho to open children's centre for his Sentebale charity. Prince Harry is currently touring the centre #lesotho.

#princeharry is reunited with Mutsu Potsane, 14, whose care he's followed since meeting him 10 yrs ago. #PrinceHarry is reunited with Mutsu #LesothosChildren #Sentebale. Prince Harry just arrived on Lesotho to open children's centre for his Sentebale charity. #gcf2015. Prince Harry meets Lesotho's King Letsie III. His brother Prince Seeiso is cofounder of @Sentebale. Yesterday night #SwedishRoyals hosted Global Child Forum Dinner at the Royal Palace. Over the years Mutsu has kept HRH posted on how he is getting on with the help of @Sentebale. They last met in 2014. Prince Harry first met 4-year-old Mutsu Potsane at Mants'ase Children's Home for orphans in #Lesotho in 2004. To mark today's occasion @sentebale, we're releasing this very special letter from Mutsu to his friend, Prince Harry.

HSH Prince Albert II of Monaco Participates in a Symbolic Walk for Peace. Queen makes emotional visit to Malta for what may be her last Commonwealth summit. As a result its stonework is crumbling, paintwork peeling, shutters falling apart, ironwork rusting and weeds have overtaken the garden where the Queen and the Duke once relaxed in the Mediterranean sun. 'If the Queen asks to visit this property again, it shouldn't be in this state. 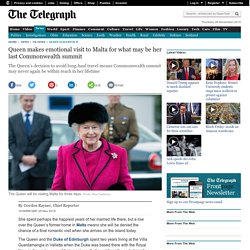 We must save it. Tourists are disgusted at how we treat our heritage' Conservationist Astrid Vella. Queen makes emotional visit to Malta for what may be her last Commonwealth summit. Prince Harry pays tribute to his mother Princess Diana and his nanny Olga Powell. Harry names rooms at Mamohato Children's Centre after mother and nannyPrince's charity helped build home for sick children in Lesotho, AfricaThe royal flies out tomorrow to officially open the ground-breaking centre See more of the latest on Prince Harry at www.dailymail.co.uk/princeharry By Rebecca English for MailOnline Published: 21:20 GMT, 25 November 2015 | Updated: 00:38 GMT, 26 November 2015 Prince Harry has paid a moving tribute to two of the most significant women in his life at a new centre for children with HIV/AIDS in Africa. 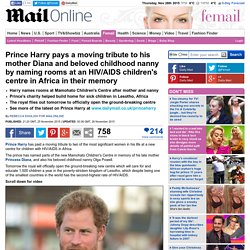 #kingconstantine #queenannemarie in one event of the non-profit Association ELIZA, with Prince Michael and M.Karella. The Queen shakes hands with prime minister of Canada Justin Trudeau at nostalgic meeting. Recalling their history, Mr Trudeau, now 6ft 2in, told the 5ft 4in sovereign: "The last time we met you were much taller," according to Canadian broadcaster CBC News. 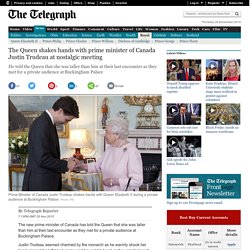 The Queen told him it was "nice to see you again ... but under different circumstances". Former school teacher-turned-politician Mr Trudeau was elected last month, ending almost ten years of Conservative rule in Canada. A letter from King George VI to Princess... - The British Monarchy. Lady Kitty Spencer in beautiful ballgowns. Yes please. HM King Willem-Alexander of the Netherlands Presents an Award in Amsterdam. 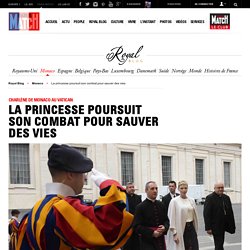 On Wednesday, November 25, 2015, Their Majesties King Philippe and Queen Mathilde of Belgium participated in a roundtable discussion at the Palais Royal in Brussels. 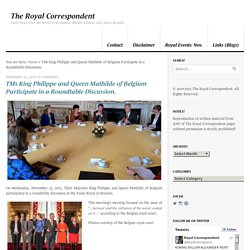 Wine Pairings for Our Favorite Members of the Royal Family. Wines are often described as regal, nobel, long-lived, and aristocratic—but far more rarely is the British royal family described as earthy and full-bodied. How dare you! Like humanity, the wine world has its own hierarchy. And while we don’t pick our royal favorites based on how they smell or taste, for conversation’s sake, let’s. Below, find wine pairings for Queen Elizabeth, Prince Charles, Kate Middleton, and more. Queen Elizabeth: Château d’Yquem Age-worthy, viscous, sweet, and thrives in rainy weather: her majesty has much in common with a glass of Château d’Yquem. Wine Pairings for Our Favorite Members of the Royal Family. 悠仁さま、付属小の音楽会に参加(TBS系（JNN）) Last night, Crown Princess Mary attended the French Embassy's award for Human Rights. Monaco Royal Twins Princess Gabriella & Prince Jacque w/ parents Albert & Charlene on front cover of @PointDeVueMag.

Albert II after ascending the throne in 2005, decided to maintain the date of the national holiday on November 19 in honor of his father, Prince Rainier III who ascended the throne on this day in 1949. Antes disso, no seu Facebook oficial o Palácio divulgou algumas fotografias das várias gerações de crianças Grimaldi neste dia. Vale a pena ser visto.Before that, on its official Facebook the Palace released some photos of the various generations of Grimaldi children on this day. It pays to be seen. Este ano, a Festa teve contornos especiais. Após a missa a família assistiu ao desfile militar dos balcões do Palácio. E depois houve Beatrice.

Princess Joins Duke In Malta. Queen arrives to address Church of England national assembly. Spotted in Walden: Prince William lands air ambulance to help man with head injuries. #kingpavlos and #kingconstantine. Queen and State > Queen and Church > Queen and the Church of England. It's good to see animals shot with a camera rather than a gun!!!

#PrincessMadeleine & #PrincessLeonore of Sweden attend the opening of the Swedish Church in London Christmas Market.