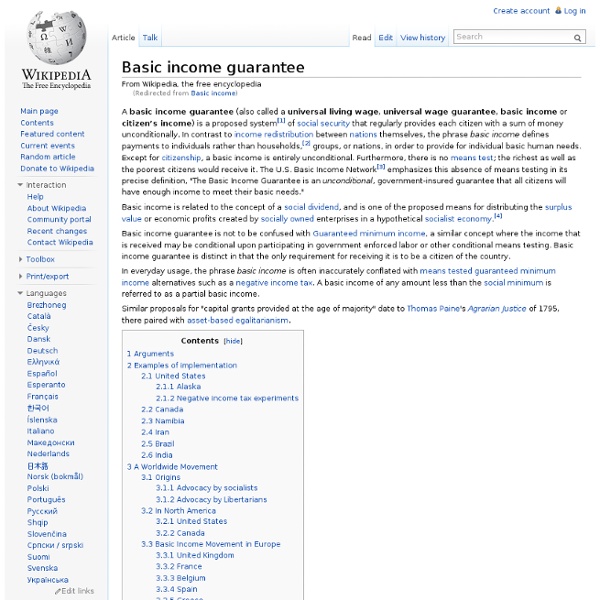 An unconditional basic income (also called basic income, basic income guarantee, universal basic income, universal demogrant,[1] or citizen’s income) is a proposed system[2] of social security in which all citizens or residents of a country regularly receive an unconditional sum of money, either from a government or some other public institution, in addition to any income received from elsewhere. A basic income is typically intended to be only enough for a person to survive on, so as to encourage people to engage in economic activity. A basic income of any amount less than the social minimum is sometimes referred to as a 'partial basic income'. On the other hand, it should be high enough so as to facilitate any socially useful activity someone could not afford to engage in if dependent on working for money to earn a living.[citation needed] Basic income systems financed on returns to publicly owned enterprises are major components in many proposals for market socialism. Properties[edit]

Philippe Van Parijs Philippe Van Parijs (French: [filip vɑ̃ paʁɛjs]; born 23 May 1951, Brussels) is a Belgian philosopher and political economist, mainly known as a proponent and main defender of the basic income concept and for the first systematic treatment of linguistic justice.[1] Education[edit] Philippe Van Parijs studied philosophy, law, political economy, sociology and linguistics at the Université Saint-Louis (Brussels), at the Université catholique de Louvain (UCL) in Louvain-La-Neuve, at the Katholieke Universiteit Leuven (KU Leuven) in Leuven, Oxford, Bielefeld and California (Berkeley). He holds doctorates in the social sciences (Louvain, 1977) and in philosophy (Oxford, 1980).[2] Career[edit] He is professor at the Faculty of economic, social and political sciences of the Université catholique de Louvain (UCL), where he directs the Hoover Chair of economic and social ethics since its creation in 1991. Bibliography[edit] Arguing About Justice. Work[edit] References[edit] External links[edit]

Participatory Budgeting in New York City | REAL MONEY. REAL PROJECTS. REAL POWER. The lawsuit that could end the gangster rule of Western civilization The lawsuit that could end the gangster rule of Western civilization November 24th, 2011 A lawsuit was filed today (November 23rd US time) that could end the secret government that has ruled Western civilization for at least the past 300 years. The lawsuit claims that close to $1 trillion was stolen by, among others, UN Secretary General Ban Ki Moon and the UN, former Italian Prime Minister Silvio Berlusconi and the Italian government, Giancarlo Bruno and the Davos World Economic forum and others believed to include many of the owners of the US Federal Reserve Board. The lawsuit was filed in New York by Neil Keenan, acting as representative of the Dragon family, a reclusive group of wealthy Asian families. The ultimate defendants in this legal action are believed to be the same cabal behind the assassination of US President John F. Dal Bosco subsequently absconded with the bonds and was followed 24-hours a day by various intelligence service agents to see what he would do with them. 1.

Basic Income Studies Instructions for Authors This document provides authors with details on policy, copyediting, formatting, and layout requirements pertaining to final manuscript submission to this journal. All manuscripts must have correct formatting to be considered for publication. The manuscript submission and review process is handled through ScholarOne Manuscripts. Unpublished material: Submission of a manuscript implies that the work described is not copyrighted, published or submitted elsewhere, except in abstract form. Copyright: Manuscripts are accepted on condition of transfer of copyright (for U.S. government employees: to the extent transferable) to Basic Income Studies. The ScholarOne system has been designed to improve the scholarly publication process for authors. De Gruyter does provide a light copyedit of manuscripts for this journal, but authors remain responsible for being their own copyeditors. All manuscripts must be written in clear and concise English. • Only use Unicode fonts (e.g.

In Quebec, labour-sponsored "Solidarity Funds" are generating jobs MONTREAL - The Solidarity Fund is a financial innovation in North America, and is one of few similar institutions in the world (Note 1). Created in 1983 by the Quebec Federation of Labour, the Fund was born into a period of deep recession in Quebec and Canada. "Full employment was a highly attractive prospect at the time," affirms Daoust. From the start, realities had to be tackled. The Fund seeks profitability, but it is considered first and foremost a "capital for development" fund, financial output representing only one part of the equation. In 2003, the Solidarity Fund had over half a million shareholders. As a result, workers have a role beyond the execution of tasks. Beyond the four initial guiding principles, the Solidarity Fund knew it had to develop other characteristics over its 20 year history - the reason for its success today. The Responsables Locaux (Local Representatives) hold great pride in the Fund. The success of the Solidarity Fund is not limited to Quebec.

Basic Income, a new human right IEET Contributor, B. Abbott on Structural Unemployment Sign the petition here: Follow us on facebook: Basic Income should be universal, individual, unconditional and high enough to ensure a dignified existence and participation in society. This new fundamental right for humanity, not only would eradicate misery, it is also a way to develop non-market oriented work: such as artists, parents and volunteers. Therefore, it would enable us to fully exercise our citizenship. More about basic income: French Version: Italian Version: Spanish Version: Dutch: Want to add more languages? Polish subtitles credits: Listen/View

The Green Hilton Agreement - Geneva 1963 By 1961, Keynes predictions of a world monetary crisis began to become a reality. This problem was brought about by the lack of sufficient currency (especially US Dollars) in world circulation to support the rapidly expanding international commerce. The World needed US Dollars beyond the capacity of the good faith and credit of the United States Taxpayer in order to facilitate trade. It was not possible to break the Bretton Woods treaty due to the possible damage of the stable core of the world’s economy as this had the potential of leading to another major war. In 1963 the gold that had been entrusted to the care of President Soekarno was recalled by the Nations to underpin the issuance of further US Dollars in order to further facilitate international trade. Under the agreement signed between President Soekarno and President John Kennedy, was that control of these assets would cede automatically to US upon the fall from power of President Soekarno. This occurred in 1967.

Rediscovering The Utopian In Europe: An Interview With Philippe Van Parijs Philippe Van Parijs is a central figure in the worlds of philosophy and politics alike. Described by Amartya Sen as “one of the most original and creative thinkers of our time,” he is famous for his defense of a Universal Basic Income – an unconditional monthly grant allocated to all – as the best expression of social justice and freedom. Building on the thought-provoking exchange between Francis Fukuyama and Jürgen Habermas published in May, this special extended interview challenges us to imagine a fairer future for the European project. In their interview in this magazine last year, Jürgen Habermas and Francis Fukuyama suggested the financial crisis had revealed the weaknesses of the European Union (EU). There seems to be a critical lack of trust, solidarity and cohesion – what is your diagnosis? Solidarity is easy when it does not cost much. Solidarity is also more difficult to manage when different cultures are involved. Some European elites do wish to transcend national concerns.