Abusive parents: What do grown children owe the mothers and fathers who made their childhood a living hell? 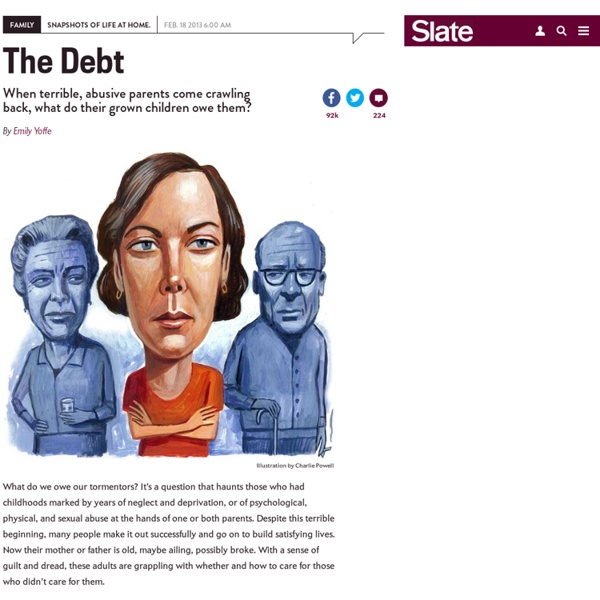 Illustration by Charlie Powell What do we owe our tormentors? It’s a question that haunts those who had childhoods marked by years of neglect and deprivation, or of psychological, physical, and sexual abuse at the hands of one or both parents. Despite this terrible beginning, many people make it out successfully and go on to build satisfying lives. Now their mother or father is old, maybe ailing, possibly broke. With a sense of guilt and dread, these adults are grappling with whether and how to care for those who didn’t care for them. Emily Yoffe is a contributing editor at the Atlantic. Rochelle, 37, wrote to me in my role as Slate’s Dear Prudence because of the pressure she was getting from friends to reach out to her mother. Rochelle started waitressing when she was 15. That was Rochelle’s breaking point—after that, she didn’t see her mother for the next 13 years. The visits took a toll. There is no formula for defining one’s obligations to the parents who didn’t fulfill their own. Related:  family articles

Zweihänder The Zweihänder (German for "two hander", also called Great sword, Bidenhänder, Schlachtschwert[1] or Bihänder), is a two-handed sword primarily of the Renaissance. It is a true two-handed sword because wielding it requires two hands, unlike other large swords that also can be used with one.[2] The Zweihänder swords seamlessly develop from the German "Langschwert" (longsword) of the Late Middle Ages and became a hallmark weapon of the German Landsknechte from the time of Maximilian I (d. 1519) and during the Italian Wars of 1494–1559. These swords represent the final stage in the trend of increasing size that started in the 14th century. Morphology[edit] Due to their size and weight — typically at least 1.4 m (4 ft 71⁄8 in) long and with a weight of over 2 kg — Zweihänders require two hands; as such they require at least 25 cm (9.84 in) for the grip.[4] Zweihänders above 4 kg are considered to be more ceremonial than practical. Application[edit] References[edit] External links[edit]

inherit_stress_from_parents_snowshoe_hares_provide_new_research_video A recent study from the University of Pennsylvania used 60 years of data on the snowshoe hare to identify stress as a major factor in the wildly varying numbers from generation to generation. Freaked-out hare females with high levels of stress hormones give birth to smaller litters, with smaller babies who also possess high stress hormone levels, and subsequent generations then decline in numbers. In humans, we know stress is a factor in heart disease, diabetes, and obesity. And an increasing body of work suggests we may be able to inherit stress by means other than our DNA.

Future - Can we sense invisible magnetic fields? In 2006, an Arizona body-hacker named Steve Haworth sliced open Quinn Norton's ring finger, slipped a small rare-earth magnet into the incision, and then sewed her up. "If I pick up a cord or I ran my hand over my laptop, certain parts of it would just make my finger tingle," she said in an interview with NPR's All Things Considered (she originally wrote about it for Wired.) "I'd reach over towards something and I'd have this very sudden tingling in my finger from a live phone cord. Phone cords aren't particularly high voltage but they're also not very shielded. Norton's purpose wasn't to invoke some superheroic ability to move objects like Magneto from Marvel's X-Men comics. Here's how it works: our fingertips are packed to the brim with sensory receptors, the nerve endings that inform your brain about whatever it is you're touching. Scientists have known since the late 1960s that some birds navigate by taking advantage of the Earth's magnetic fields Animals don't have to try so hard.

When Shame feels Mothering: The Tragedy of Parentified Daughters Bethany Webster The road between a little girl and her mother is supposed to be a one-way street with support flowing consistently from the mother to the daughter. It goes without saying that little girls are totally dependent on their mothers for physical, mental and emotional support. However, one of the many faces of the mother wound is the common dynamic in which the mother inappropriately depends on the daughter to provide her with mental and emotional support. This role-reversal is incredibly damaging to the daughter, having long-range effects on the her self-esteem, confidence and sense of self-worth. Alice Miller describes this dynamic in "The Drama of the Gifted Child." The young daughter then has to repress her own developmental needs in order to accommodate the emotional needs of the mother. A daughter is being exploited when her mother gives her adult roles, such as surrogate spouse, best friend or therapist. The message is there's not enough mothering or love to go around.

MediEvil MediEvil is a series of action-adventure hack n' slash video games developed by SCE Cambridge Studio and published by Sony Computer Entertainment. The main protagonist of the series is a cowardly, skeletal undead knight, Sir Daniel Fortesque. The name of the series is a portmanteau of medieval and evil. Games[edit] MediEvil is the first game in the series. MediEvil was one of the first games to support a DualShock controller on the PlayStation. MediEvil 2[edit] MediEvil 2 is the second installment in the series. MediEvil Resurrection[edit] MediEvil Resurrection is the third installment in the series. Sir Daniel Fortesque[edit] For years, Dan had regaled the nobles of Gallowmere with tales of slain dragons and vanquished legions. Daniel was dragged from his bed and thrust at the front of King's army to face the undead horde. Appearances in other games[edit] Dan appears as a playable golfer in Hot Shots Golf 2 and is playable in the fighting game, PlayStation All-Stars Battle Royale.

Why the Definition of Depression Isn't Working Health Many psychiatrists believe that a new approach to diagnosing and treating depression—linking individual symptoms to their underlying mechanisms—is needed for research to move forward. Please consider disabling it for our site, or supporting our work in one of these ways Subscribe Now > In his Aphorisms, Hippocrates defined melancholia, an early understanding of depression, as a state of “fears and despondencies, if they last a long time.” It was caused, he believed, by an excess of bile in the body (the word “melancholia” is ancient Greek for “black bile”). Ever since then, doctors have struggled to create a more precise and accurate definition of the illness that still isn’t well understood. Today, Schneider’s subtypes have largely fallen out of favor—but over the years, many more definitions were offered in their place. Some scientists believe that the DSM-V definition is still too vague. Many recent studies have corroborated Goldberg’s concerns.

“Tits” - Sociological Images Assigned: Life with Gender is a new anthology featuring blog posts by a wide range of sociologists writing at The Society Pages and elsewhere. To celebrate, we’re re-posting four of the essays as this month’s “flashback Fridays.” Enjoy! “Tits,” by Matt Cornell Of the many nicknames I’ve acquired over the years, there’s one I’m reminded of today. But my bully simply called them “tits.” I was Tits. He would pass me in the hall and catcall “Hey Tits!” As direct as this bullying was, growing up with gynecomastia was characterized by smaller insults. When wearing shirts, it was crucial that they be loose fitting. As a fat kid, and one who hated competition, I learned to loathe sports, and especially, physical education. By high school, I had developed remarkable powers of verbal self defense. The doctors thought that perhaps I suffered from low testosterone. So I lost weight. In the first surgery, I was placed under general anesthesia. I was nineteen. It’s culturally ubiquitous. I am Tits.

The aftermath of psychopathy as experienced by: romantic partners, family members and other victims | Aftermath: Surviving Psychopathy Foundation by Linda S. Hartoonian-Almas and Liane J. Leedom, M.D. Psychopathic individuals take the lives of their victims, at least figuratively, sometimes literally. In one recent survey[i] of women who reported involvement with individuals with psychopathic features, they reported the following harm: There are five sources for the information found in this resource including the above survey. Psychological and Emotional Harm By psychological and emotional harm, we mean effects on the way victims think and feel. Life with a psychopathic individual is characterized by outright lies, slight omissions, and clever manipulations. It is not unusual for the victims of psychopaths to question their sanity and self worth. Psychopathic individuals may even try to convince victims that it is they who are “crazy.” Generally, psychopathic individuals are out to service their own short term agendas. Once an individual is no longer of use to the psychopath, it is common for that person to be discarded. Summary

The top 10 emerging technologies for 2013 Find out about the top 10 emerging technologies for 2014 here. New challenges need new technologies to tackle them. Here, the World Economic Forum’s Global Agenda Council on Emerging Technologies identifies the top 10 most promising technology trends that can help to deliver sustainable growth in decades to come as global population and material demands on the environment continue to grow rapidly. These are technologies that the Council considers have made development breakthroughs and are nearing large-scale deployment. OnLine Electric Vehicles (OLEV) Wireless technology can now deliver electric power to moving vehicles. 3-D printing and remote manufacturing Three-dimensional printing allows the creation of solid structures from a digital computer file, potentially revolutionizing the economics of manufacturing if objects can be printed remotely in the home or office. Self-healing materials Energy-efficient water purification Carbon dioxide (CO2) conversion and use Remote sensing

How Smartphone Apps Can Treat Bipolar Disorder and Schizophrenia Bryan Timlin always carries an iPhone and an Android phone. The 57-year-old is an app and graphic designer with a Michigan company called OptHub, but he doesn’t carry two phones for work. He carries the iPhone because that’s what he likes, and he carries the Android because it’s what he needs. The Android phone monitors his behavior. Five years ago, Timlin was diagnosed with rapid-cycling bipolar disorder, a mental illness characterized by four or more manic or depressive episodes a year. Click to Open Overlay Gallery The phone, provided by researchers at the University of Michigan, includes an app called Priori that runs constantly in the background, using the phone’s microphone to analyze his voice and track when he is, and isn’t, speaking. At the moment, the app only collects data on his behavior. Priori is one of many efforts to address mental health through smartphone apps. A Look Into the Future The Potential These projects remain in the early stages. Thermometer of a Different Kind

In the Absence of the Village, Mothers Struggle Most - Free Range Child — Over Grow The System Now? We’re being forced to create all of that for ourselves within a society that has physically and energetically restructured itself around a whole new set of priorities. It’s a profits before people model, which threatens the wellbeing of nearly everything we mothers are wired to protect. Though I’m optimistic and hopeful by nature, this dilemma has left me discouraged many times over the years. How does an entire nation of mothers shift a storyline this massive while individually and collectively weakened by the absence of the very thing we so desperately need? Major cultural shifts in prioritization, structure, and power are clearly in order (and I do believe they’re happening, however chaotically). We can buy into, make peace with, and conform to the way things are, or exercise the freedoms our foremothers and fathers won for us and commit to doing our unique and essential part in creating change, starting within us and working our way out. I’ve tasted village life: