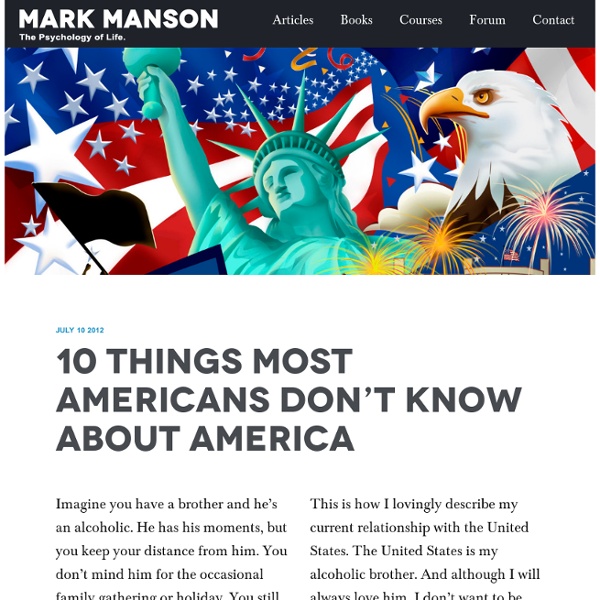 Imagine you have a brother and he’s an alcoholic. He has his moments, but you keep your distance from him. You don’t mind him for the occasional family gathering or holiday. This is how I lovingly describe my current relationship with the United States. I know that’s harsh, but I really feel my home country is not in a good place these days. I realize it’s going to be impossible to write sentences like the ones above without coming across as a raging prick, so let me try to soften the blow to my American readers with an analogy: You know when you move out of your parents’ house and live on your own, how you start hanging out with your friends’ families and you realize that actually, your family was a little screwed up? The point is we don’t really get perspective on what’s close to us until we spend time away from it. So as you read this article, know that I’m saying everything with tough love, the same tough love with which I’d sit down and lecture an alcoholic family member. 1. 2. 3.

Raging Bull Raging Bull is a 1980 American biographical sports drama film directed by Martin Scorsese, produced by Robert Chartoff and Irwin Winkler and adapted by Paul Schrader and Mardik Martin from Jake LaMotta's memoir Raging Bull: My Story. It stars Robert De Niro as Jake LaMotta, an Italian American middleweight boxer whose self-destructive and obsessive rage, sexual jealousy, and animalistic appetite destroyed his relationship with his wife and family. Also featured in the film are Joe Pesci as Joey, La Motta's well-intentioned brother and manager who tries to help Jake battle his inner demons, and Cathy Moriarty as his wife. Scorsese was initially reluctant to develop the project, though he eventually came to relate to La Motta's story. Plot[edit] A year later, Jake asks Joey if he fought with Salvy at the Copacabana because of Vickie. By 1956, Jake and his family have moved to Miami. The film cuts to black with the following Biblical quote filling the screen: Remembering Haig P. Cast[edit]

"What Does Love Mean?" See How 4-8 Year-Old Kids Describe Love Article By:Ladan Lashkari A group of professional people posed this question to a group of 4 to 8 year-olds: "What does love mean?" The answers they got were broader and deeper than anyone could have imagined. See what you think... "When my grandmother got arthritis, she couldn't bend over and paint her toenails anymore. Rebecca - age 8 "When someone loves you, the way they say your name is different. Billy - age 4 "Love is what makes you smile when you're tired." Terri - age 4 "Love is when my mommy makes coffee for my daddy and she takes a sip before giving it to him, to make sure the taste is OK." Danny - age 7 "Love is when you kiss all the time. Emily - age 8 "Love is what's in the room with you at Christmas if you stop opening presents and listen." Bobby - age 7 (Wow!) "If you want to learn to love better, you should start with a friend who you hate." Nikka - age 6 (we need a few million more Nikka's on this planet) "Love is when you tell a guy you like his shirt, then he wears it everyday."

Atmosphere - Speed Queen Powerful Pictures Three sisters pose for photographs taken years apart. A Russian war veteran visits the tank that he fought in which has been preserved as a monument. A child gives a gift to riot police in Bucharest. Retired Police Chief Captain Ray Lewis is arrested at an Occupy Wall Street protest. A monk prays over the body of an elderly stranger who died suddenly while waiting on a train in China. A dog named Leao keeps watch by the the grave of his owner who was killed in a landslide in Rio de Janeiro. Tommie Smith and John Carlos raise their fists in a gesture of solidarity at the 1968 Olympic games. John F. Christians protect Muslims during the 2011 Cairo uprisings. A North Korean man waves his hand as a South Korean relative weeps, following a luncheon meeting during inter-Korean temporary family reunions at Mount Kumgang resort October 31, 2010. A dog is reunited with his master after the 2011 Japanese Tsunami. A mother comforts her son following the 2011 tornado in Concord, Alabama.

The Top 10 Relationship Words That Aren't Translatable Into English Here are my top ten words, compiled from online collections, to describe love, desire and relationships that have no real English translation, but that capture subtle realities that even we English speakers have felt once or twice. As I came across these words I’d have the occasional epiphany: “Oh yeah! That’s what I was feeling...” Mamihlapinatapei (Yagan, an indigenous language of Tierra del Fuego): The wordless yet meaningful look shared by two people who desire to initiate something, but are both reluctant to start. Oh yes, this is an exquisite word, compressing a thrilling and scary relationship moment. Yuanfen (Chinese): A relationship by fate or destiny. From what I glean, in common usage yuanfen means the "binding force" that links two people together in any relationship. But interestingly, “fate” isn’t the same thing as “destiny.” Cafuné (Brazilian Portuguese): The act of tenderly running your fingers through someone's hair. Ya’aburnee (Arabic): “You bury me.”

Exploring Space: Cosmic Revolutionaries 10 Incredible Quotes That Will Refresh Your Perspective On Life April 12, 2012 | 10 Comments » | Topics: Life, Quotes Hot Stories From Around The Web Other Awesome Stories I Have Dated Several Crack Dealers Illustration by Rob Ondzik The source of this story, who lives in Canada, wished to remain anonymous for fairly obvious reasons. Just last week, I was at a trap house with my ex in Cloverdale, British Columbia. Crack dealers tend to approach me. I’ve met some of them through friends, some I’ve met randomly at the club, or at a bar, or on the street. The first time I was approached by a crack dealer, I was 19 and at a party somewhere in East Vancouver. He was a full-time dealer and worked on the streets, mostly around the Downtown Eastside, but it was nothing huge. Illustration by Lindsay Pomerantz I used hang with a guy who would go to Saskatchewan and sell drugs all the time. But even with him, it wasn’t all limos and fancy dinners. I dated another crack dealer who I liked to call “Art School Boy.” You want to get a regular job but you can't, because you have a criminal record. For a while, I was a driver. Ultimately, none of these relationships worked out. Crack Tales Cut the Shit