Common Posture Problems & How To Fix Them 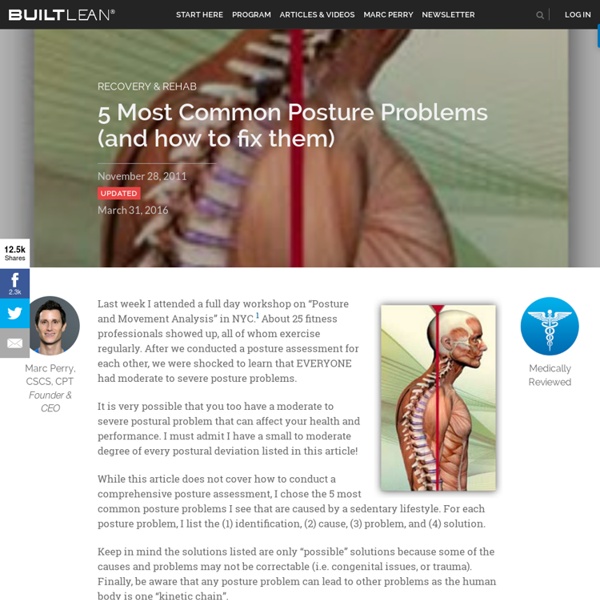 Tesla publishes Model S driving logs that show The New York Times’ blatant lies Following Elon Musk’s initial denouncement of The New York Times for publishing a fake review of the Tesla Model S electric car, he has now published the actual logs recorded by the car — and boy are they damning. In short, the NYT’s John Broder lied through his teeth to smear electric vehicles in general, and the Model S in specific. The basic premise of John Broder’s story for The Times was that the car lied about its self-reported estimated remaining range; when it said there was 79 miles left in the batteries, there was in actual fact only 60. The vehicle’s logs, published today by Elon Musk, tell a very different story. Tesla’s logs from John Broder’s Model S test drive: Speed It gets better. Speaking of charging, not once did Broder recharge his Model S fully. Rather odd recharging behavior… John Broder, driving around in a parking lot in an attempt to drain the Model S’s battery It will be very interesting to see how The Times responds to Musk’s claims.

Fictional recreational drugs : wikipedia List of fictional medicines and drugs The use of fictional medicine and drugs has history in both fiction (usually fantasy or science fiction) and the real-world. In fiction, drugs and medicine have served as analogues to real-world drugs, giving color and depth to the fictional world. They are often included by authors in order to create or to reduce the utopian/ideal nature of their fictional world[1] and to introduce harsh realism and dystopia.[2][3] In the real world, fictional drugs have been used in scientific studies as markers to determine unreliability for survey participants who are asked to provide their history of drug usage.[4][5] The following list of fictional medicines and drugs is limited to drugs appearing in works of fiction. Fictional medicines[edit] Performance and lifestyle enhancers[edit] These drugs are for enhancing strength, intelligence, and other attributes. Recreational[edit] Drugs used for narcotic, hallucinogenic or other recreational usage. Other or unspecified[edit] See also[edit]

Adrenochrome Chemistry[edit] In vivo, adrenochrome is synthesized by the oxidation of epinephrine. In vitro, silver oxide (Ag2O) is used as an oxidizing agent.[2] Its presence is detected in solution by a pink color. Effect on the brain[edit] Several small-scale studies (involving 15 or fewer test subjects) were done in the 50s and 60s, reporting that adrenochrome triggered psychotic reactions like thought disorder, derealization, and euphoria.[3] It has never been scientifically accepted, however, that adrenochrome has psychedelic properties.[4] Researchers Abram Hoffer and Humphry Osmond claimed that adrenochrome is a neurotoxic, psychotomimetic substance and may play a role in schizophrenia and other mental illnesses.[5] In what they called the "adrenochrome hypothesis",[6] they speculated that megadoses of vitamin C and niacin could cure schizophrenia by reducing brain adrenochrome.[7][8] Law[edit] Adrenochrome is uncontrolled in the United States. In popular culture[edit] References[edit]

Cassandra Peterson Biography[edit] Born in Manhattan, Kansas, Peterson grew up near Randolph, until the area was flooded to create Tuttle Creek Reservoir; her family then moved to Colorado Springs, Colorado. According to a 2011 interview, Peterson states that as a child, while other girls were occupied with Barbie dolls, she was more fascinated by horror-themed toys.[1] During her teens, Peterson worked as a go-go dancer in a local gay bar.[2] She has also played non-Elvira roles in many other films, most notably Pee-wee's Big Adventure (1985) with friend and fellow Groundling Paul Reubens (as his Pee-wee Herman character) and Allan Quatermain and the Lost City of Gold (1985) starring Richard Chamberlain and Sharon Stone. Career[edit] Early career[edit] Peterson auditioned for the role of Ginger Grant for the third Gilligan's Island television movie in 1981, shortly before KHJ-TV offered her the horror-host position.[8] Peterson also was a personality on Los Angeles radio station KROQ 106.7 from 1982 to 1983.

Metro Times: Restaurant Review: Hygrade Delicatessen Restaurant in Detroit The Hygrade Deli was recommended to me by former state Rep. Steve Tobocman of Southwest Detroit — and when a government guy tells you to do something, you have to do it, right? Oh, wrong: That's the Obama death panels; sorry, I was confused. Anyway, Tobocman not only wanted to help out his constituents — the Hygrade has a large ratio of staff to customers — he also appreciates the quality corned beef, 400 pounds of it served each week. You can't walk in without thinking "time warp," what with the diner chairs with their sparkly blue, red and gold seats, the counter with its low stools and the motherly and well-informed waitresses who really do seem to care. The Hygrade Deli started 55 years ago in the old Western Market that sprawled across the 18th and Michigan area. Thirty-seven years ago, the Hygrade got traffic from downtown as well as the neighborhood. Let me not mislead you, readers: Not everything on the Hygrade menu is of equal quality.

Tesla publishes Model S driving logs that show The New York Times’ blatant lies : technology 'I want a world where disabled people are valid sexual partners' | Society Ash King felt as if he had spent his adult life searching for some sort of sexual intimacy. Born with a severe spinal and muscular condition, sex was something he still hadn't experienced by the age of 35 and he was afraid that, with his disability making him increasingly weak, he never would. In 2010, after becoming isolated and depressed, King decided to hire a sex worker. "I couldn't make someone fall in love with me," he says, "but I could at least learn about my sexual potential and more about women by paying a sex worker." Looking back at his first sexual encounter, King describes it as an "enlightenment". The sexual needs of people with disabilities are under the spotlight like never before after the release of Oscar-nominated film The Sessions, which is based on the true of story of a man confined to an iron lung who loses his virginity to a "sexual surrogate". In the UK, paying for sex is not against the law but it is illegal to solicit sexual services.