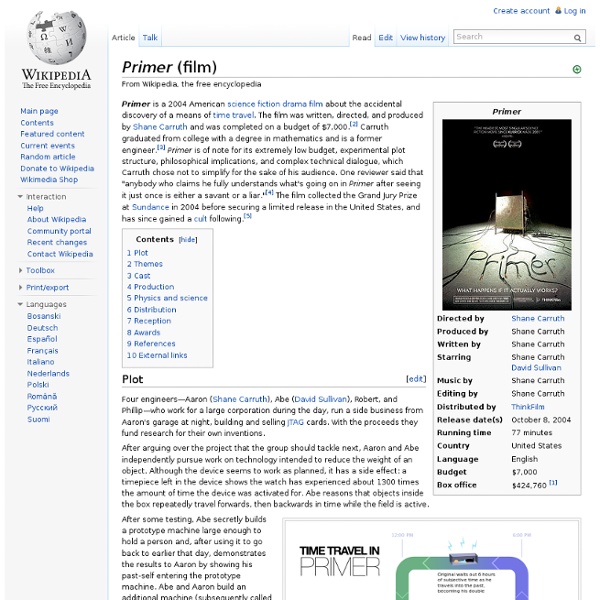 Primer is a 2004 American science fiction drama film about the accidental discovery of a means of time travel. The film was written, directed, and produced by Shane Carruth. Primer is of note for its extremely low budget (completed for $7,000), experimental plot structure, philosophical implications, and complex technical dialogue, which Carruth, a college graduate with a degree in mathematics and a former engineer, chose not to simplify for the sake of the audience.[2] The film collected the Grand Jury Prize at the 2004 Sundance Film Festival, before securing a limited release in the United States, and has since gained a cult following.[3] The operation of time travel in Primer. After arguing over the project that the group should tackle next, Aaron and Abe independently pursue work on technology intended to reduce the weight of an object. Having traveled back four days in time using this failsafe point, Abe goes to meet Aaron and collapses. List of films featuring time loops

Swingers (1996 film) Mike Peters (Jon Favreau) is a struggling actor who left New York, and a girlfriend behind, to find success in L.A. The move caused his girlfriend of six years to split up with him six months earlier and left him feeling alone and heartbroken. In the opening scenes of the film, Mike talks about his situation with his friend Rob (Ron Livingston), another thespian from back east. On the ride home, Trent gets Mike to feel better about himself and to look at the positive side of things. Now back in L.A., Mike and Rob get together for some golf and to talk shop. The guys agree to head to their favorite after hours spot and after watching Trent and Sue effortlessly meet some girls, Mike is clearly shown feeling lower than ever but not yet defeated. The swingers leave the lounge and narrowly miss getting into a brawl in the parking lot caused by Sue's temper yet averted by Sue pulling a gun which no one else was aware was even a part of his attire. A still from Swingers Filming locations

Top 7 Movies of Dharmendra - Some heard, some unheard!! - FILMISTANI - Filmon Ki Kahani, Hamari Zubani !! So after a long vacation, we are back. 2012 was an amazing year for Bollywood and 2013 seems to be doing even better with Chennai Express making 150 crores in 2 weeks and Jawani Deewani etc clocking almost 200 khokha. So we at Filmistani are going to take a deep breath, kill ourselves and become a ghost of 'Christmas Past'. From Dil Bhi Tera, Hum Bhi Tere to YPD, Dharmendra acted in nearly two hundred and fifty films and never won a Filmfare Best Actor award despite being discovered in a Filmfare talent spotting competition. Dharmendra is perhaps one of the most talked about superstars in the industry and rightly so. Directed by Satyen Bose starring Dharam ji and Rakhi, this movie depicts the internal tension and deconstruction that the lead character Ashok Tandon (Dharam Ji) goes through. Considered by many as the best war movie ever made in India, Haqeeqat by Chetan Anand was a realistic, cold and brutal peep into the immediate aftermath of the Indo-China war. 3) Anupama (1966)

chickenknuckles comments on How do you respond to clients that do not want to pay you the rate you have established for yourself? Bollywood Recaps reftut <div class="noscript"><p><strong>Please note: Many features of this site require JavaScript. You appear to have JavaScript disabled, or are running a non-JavaScript capable web browser.</strong></p><p> To get the best experience, please enable JavaScript or download a modern web browser such as <a href=" Explorer 8</a>, <a href=" <a href=" or <a href=" Chrome</a>. </p></div> perlreftut - Mark's very short tutorial about references One of the most important new features in Perl 5 was the capability to manage complicated data structures like multidimensional arrays and nested hashes. Fortunately, you only need to know 10% of what's in the main page to get 90% of the benefit. One problem that comes up all the time is needing a hash whose values are lists. Make Rule 1