Physicists May Have Evidence Universe Is A Computer Simulation 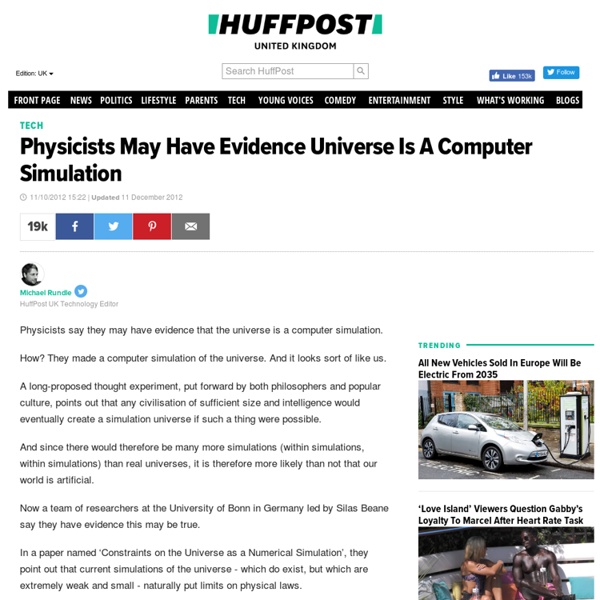 Physicists say they may have evidence that the universe is a computer simulation. How? They made a computer simulation of the universe. And it looks sort of like us. A long-proposed thought experiment, put forward by both philosophers and popular culture, points out that any civilisation of sufficient size and intelligence would eventually create a simulation universe if such a thing were possible. And since there would therefore be many more simulations (within simulations, within simulations) than real universes, it is therefore more likely than not that our world is artificial. Now a team of researchers at the University of Bonn in Germany led by Silas Beane say they have evidence this may be true. In a paper named ‘Constraints on the Universe as a Numerical Simulation’, they point out that current simulations of the universe - which do exist, but which are extremely weak and small - naturally put limits on physical laws. But the basic impression is an intriguing one.

Related:  the theory of everything

Quantum biology: Do weird physics effects abound in nature? 28 January 2013Last updated at 00:05 GMT By Jason Palmer and Alex Mansfield BBC News and BBC Radio Science Unit The multi-billion-dollar fragrance industry might just benefit from the ideas in quantum biology Disappearing in one place and reappearing in another. Being in two places at once. Weird Quantum Tunneling Enables 'Impossible' Space Chemistry A weird quirk of quantum mechanics is allowing a chemical reaction thought to be impossible to occur in cold gas in outer space. In the harsh environment of space, where the temperature is about minus 350 degrees Fahrenheit (minus 210 degrees Celsius), scientists had thought a certain reaction involving alcohol molecules couldn't take place, because at such low temperatures, there shouldn't be enough energy to rearrange chemical bonds. But surprisingly, research has shown that the reaction occurs at a rate 50 times greater in space than at room temperature. Now, by simulating the conditions of space in a laboratory, scientists have found a possible explanation for how the reaction occurs: quantum tunneling.

Quantum entanglement isn't only spooky, you can't avoid it Quantum entanglement is the key to quantum computing, cryptography, and numerous other real-world applications of quantum mechanics. It is also one of the strangest phenomena in the Universe, overcoming barriers of space and time and knitting the entire cosmos into an integrated whole. Scientists have long thought that entanglement between two particles was a rare and fleeting phenomenon, so delicate that exposure of the particles to their surroundings would quickly destroy this linkage. Now mathematicians at Case Western University have shown that entanglement between parts of large systems is the norm, rather than being a rare and short-lived relationship. Entanglement is one of the strangest predictions of quantum mechanics.

Quantum black hole study opens bridge to another universe Physicists have long thought that the singularities associated with gravity (like the inside of a black hole) should vanish in a quantum theory of gravity. It now appears that this may indeed be the case. Researchers in Uruguay and Louisiana have just published a description of a quantum black hole using loop quantum gravity in which the predictions of physics-ending singularities vanish, and are replaced by bridges to another universe. View all Singularities, such as the infinitely strong crushing forces at the center of a black hole, in a physical theory are bad. What the Hell Are Tachyons? Tachyons cause a lot of problems in movies with starships, but they also cause problems for people in real life. Specifically, they cause problems for students of relativity and string theorists. Learn about the ins and outs of tachyons, and why they need extra dimensions.

Simulations back up theory that Universe is a hologram Artist's impression by Markus Gann/Shutterstock At a black hole, Albert Einstein's theory of gravity apparently clashes with quantum physics, but that conflict could be solved if the Universe were a holographic projection. A team of physicists has provided some of the clearest evidence yet that our Universe could be just one big projection.

Quantum Process To Slow Time And Savor The Moment Updated November 22, 2014 by in5d Alternative News * Click HERE to visit our Official Facebook page and be sure to "Like" us!!! (opens in a new window) * Also visit in5D Connection where you can find your soul mate or join one of our amazing groups. EVERYONE is welcome! by Kim Caldwell guest writer for In5D.com Quantum Mechanics Reveals How We Are All Truly Connected - Learning Mind “I am saddened by how people treat one another and how we are so shut off from one another and how we judge one another, when the truth is, we are all one connected thing. We are all from the same exact molecules.” ~ Ellen DeGeneres We all know, deep down, that we are all connected. But is this notion of being connected only a magical feeling or is it concrete fact?

Brad Austen: The Different Dimensions and Our Multidimensional Selves Written by Brad Austen, Mindful-Meditations. A lot of material has been channeled in the new age community about the different dimensions and ascension. But what are these dimensions? The Earth has multiple dimensions, which remain invisible until you are vibrating to that particular dimension. Dimensions aren’t so much a place, but a state of being and vibration.

Quantum tunnelling Quantum tunnelling or tunneling (see spelling differences) refers to the quantum mechanical phenomenon where a particle tunnels through a barrier that it classically could not surmount. This plays an essential role in several physical phenomena, such as the nuclear fusion that occurs in main sequence stars like the Sun.[1] It has important applications to modern devices such as the tunnel diode,[2] quantum computing, and the scanning tunnelling microscope. The effect was predicted in the early 20th century and its acceptance, as a general physical phenomenon, came mid-century.[3] Tunnelling is often explained using the Heisenberg uncertainty principle and the wave–particle duality of matter. Purely quantum mechanical concepts are central to the phenomenon, so quantum tunnelling is one of the novel implications of quantum mechanics. History[edit]

Scientists Claim That Quantum Theory Proves Consciousness Moves To Another Universe At Death Learning Mind| A book titled “Biocentrism: How Life and Consciousness Are the Keys to Understanding the Nature of the Universe“ has stirred up the Internet, because it contained a notion that life does not end when the body dies, and it can last forever. The author of this publication, scientist Dr. Robert Lanza who was voted the 3rd most important scientist alive by the NY Times, has no doubts that this is possible. Beyond time and space

Quantum entanglement Quantum entanglement is a physical phenomenon that occurs when pairs or groups of particles are generated or interact in ways such that the quantum state of each particle cannot be described independently – instead, a quantum state may be given for the system as a whole. Such phenomena were the subject of a 1935 paper by Albert Einstein, Boris Podolsky and Nathan Rosen,[1] describing what came to be known as the EPR paradox, and several papers by Erwin Schrödinger shortly thereafter.[2][3] Einstein and others considered such behavior to be impossible, as it violated the local realist view of causality (Einstein referred to it as "spooky action at a distance"),[4] and argued that the accepted formulation of quantum mechanics must therefore be incomplete. History[edit] However, they did not coin the word entanglement, nor did they generalize the special properties of the state they considered. Concept[edit]

Does DNA Emit Light? Dan Eden for viewzone.com An incredible story! I get lots of suggestions for stories, and I really appreciate them. But some of them are too good to be true. An example of this was a story of a giant human skeleton -- maybe 40 feet tall -- that was discovered by a Russian archaeological team.