This is Why I'll Never be an Adult 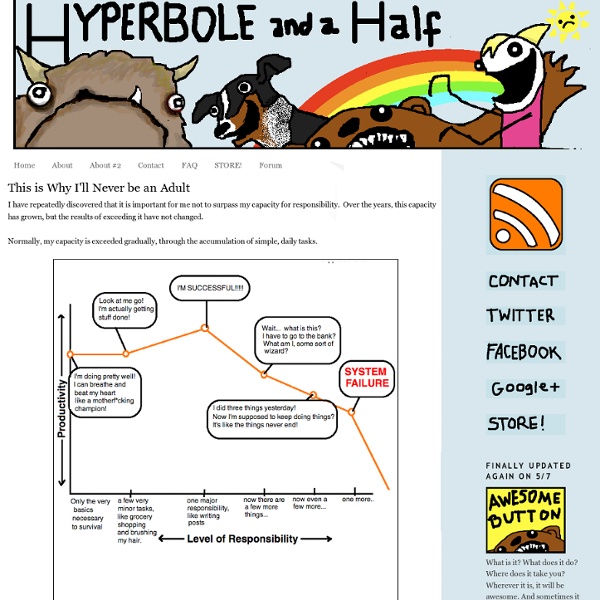 I have repeatedly discovered that it is important for me not to surpass my capacity for responsibility. Over the years, this capacity has grown, but the results of exceeding it have not changed. Normally, my capacity is exceeded gradually, through the accumulation of simple, daily tasks. But a few times a year, I spontaneously decide that I'm ready to be a real adult. The first day or two of my plans usually goes okay. For a little while, I actually feel grown-up and responsible. At some point, I start feeling self-congratulatory. This is a mistake. I begin to feel like I've accomplished my goals. What usually ends up happening is that I completely wear myself out. The longer I procrastinate on returning phone calls and emails, the more guilty I feel about it. Then the guilt from my ignored responsibilities grows so large that merely carrying it around with me feels like a huge responsibility. It always ends the same way. And then I rebel.

Depression Part Two I remember being endlessly entertained by the adventures of my toys. Some days they died repeated, violent deaths, other days they traveled to space or discussed my swim lessons and how I absolutely should be allowed in the deep end of the pool, especially since I was such a talented doggy-paddler. I didn't understand why it was fun for me, it just was. But as I grew older, it became harder and harder to access that expansive imaginary space that made my toys fun. I remember looking at them and feeling sort of frustrated and confused that things weren't the same. I played out all the same story lines that had been fun before, but the meaning had disappeared. Depression feels almost exactly like that, except about everything. At first, though, the invulnerability that accompanied the detachment was exhilarating. The beginning of my depression had been nothing but feelings, so the emotional deadening that followed was a welcome relief. Which leads to horrible, soul-decaying boredom.

Frightening Monsters Drawn On Post-It Notes I love how these monster drawings channel the spirits of Edward Gorey and Maurice Sendak in perfect measure. Created in artist John Kenn’s spare time (between raising twins and directing childrens shows) each of these images is very tiny: it was drawn using only office supplies on Post-It notes. Check out Kenn’s large collection of top-notch work at johnkenn.blogspot.com. Known in some circles as the most amazing man in the universe, he once saved an entire family of muskrats from a sinking, fire engulfed steamboat while recovering from two broken arms relating to a botched no-chute wingsuit landing in North Korea.

tetris love Steve Jobs vs. Bill Gates | SadAndUseless.com Download a template and make your own “Steve Jobs vs. Bill Gates” comic! Domesticated silver fox The result of over 50 years of experiments in the Soviet Union and Russia, the breeding project was set up in 1959[1] by Soviet scientist Dmitri Belyaev. It continues today at The Institute of Cytology and Genetics at Novosibirsk, under the supervision of Lyudmila Trut. Initial experimentation[edit] In a time when centralized political control exercised over genetics and agriculture was an official state doctrine, known as Lysenkoism, Belyaev's commitment to classical genetics had cost him his job as head of the Department of Fur Animal Breeding at the Central Research Laboratory of Fur Breeding in Moscow in 1948.[2] During the 1950s, he continued to conduct genetic research under the guise of studying animal physiology. Belyaev believed that the key factor selected for in the domestication of dogs was not size or reproduction, but behavior; specifically, tameability. The project also investigated breeding vicious foxes to study aggressive behavior. Current project status[edit]

How to Draw Girls: The Molly Crabapple Way | Art/Design As the founder of Dr. Sketchy’s Anti-Art School, I’m besieged by newbies who want to attend, but have the terror they’re not good enough. Here’s an basic guide to the complex art of figure drawing, so you can show up to your local alt.drawing salon and wield you pencil with pride. 1.) 2.) 3.) 4.) 5.) 6.) 7.) EXTRA CREDIT: Get a copy of Drawing the Head and Figure , a simple-to-follow guide to making stuff look right Most importantly, draw! Words and Art by Molly Crabapple with modeling by Katelan Foisy and photos by Lauren Goldberg. Follow us @ChinaShopMag Molly Crabapple and Katelan Foisy Molly Crabapple Katelan Foisy and art by Molly Crabapple Katelan Foisy how to draw like molly volume 1 A picture Speaks 1000 words Molly Gets down A Red Rose: The perfect Accessory Have no fear : just grab a pen! Molly Finds the Line One Sultry Session Anything Becomes Art A Sultry Smile molly makes art A proud moment Capturing the Character: Katelan Foisy "I can't believe how good it is!" "What You Lookin' At" Bold Lines

Athena’s Pickle Juice Adventure 1. Athena idly wonders what, in fact, a shot of pickle juice might taste like: 2. Enabled Encouraged by her idiot loving father, our young adventurer soon has a shot glass filled with briny liquid. 3. Down the hatch. 4. 5. 6. Join us next week, when we try a mayonnaise smoothie! Only In America Paid Commercial Ad: CompTIA sat subject tests video lectures are most authentic study tools for perfect CompTIA A+ exam prep. These are regarded as the best tools indeed and they are ready to give you an toefl study due to which you can easily get passed in the exam. Start using these sat exam and find your victorious success easily. Egocide and suicide | The Psychology of Me Lately, I’ve been thinking about egocide. (Why does my autocorrect want to change that to “geocode”??) I’m at the end of my rope and climbing back up is not an option. I’ve got to change. David Rosen, in his book Transforming Depression, describes egocide as “a symbolic killing of the ego that is experienced as ego death: a sacrifice of the ego to the Self, a higher principle.” The other day, as I was starting this post, I found a blog post about Buckminster Fuller’s egocide. Then, I was watching the last episode of Top of the Lake (streaming on Netflix) and there was the following conversation between Robin, the protagonist, and GJ, a guru-type. Robin: I don’t know how to keep living.GJ: So, you’re on your knees? Egocide is about death. The real question is: what images of myself, exactly, do I need to sacrifice? I don’t think there has to be something there to fill the gaping hole left by the sacrificed ego.

Laser Etchings by Jason Thielke Totally blown away by these etchings by Denver artist Jason Thielke. I bet this guy knew how to use a spirograph as a kid. Found on the exceptional Pattern Pulp.