The 9 Epiphanies That Shifted My Perspective Forever 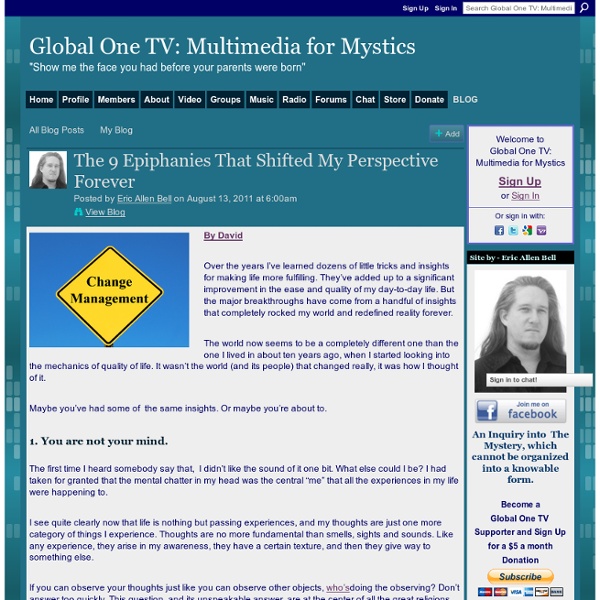 By David Over the years I’ve learned dozens of little tricks and insights for making life more fulfilling. They’ve added up to a significant improvement in the ease and quality of my day-to-day life. But the major breakthroughs have come from a handful of insights that completely rocked my world and redefined reality forever. The world now seems to be a completely different one than the one I lived in about ten years ago, when I started looking into the mechanics of quality of life. It wasn’t the world (and its people) that changed really, it was how I thought of it. Maybe you’ve had some of the same insights. 1. The first time I heard somebody say that, I didn’t like the sound of it one bit. I see quite clearly now that life is nothing but passing experiences, and my thoughts are just one more category of things I experience. If you can observe your thoughts just like you can observe other objects, who’sdoing the observing? 2. Of course! 3. 4. 5. Yikes. 6. 7. 8. 9.

60 Ways to Become The Person You Love photo credit: Niffty.. Only the time and attention we give ourselves demonstrates how much we love and admire ourselves. Self love requires that we place ourselves at the top of our priority list. Self-nurturing is everything that makes us feel positive, happy and joyful. Stellar by Ignacio Torres Beautifully executed animations by Texas photographer Ignacio Torres from his series Stellar. Via his website: This project began from the theory that humans are made of cosmic matter as a result of a stars death. I created imagery that showcased this cosmic birth through the use of dust and reflective confetti to create galaxies. The models organic bodily expressions as they are frozen in time between the particles suggest their celestial creation. In addition, space and time is heightened by the use of three-dimensional animated gifs.

40 Photo-Illustrated Questions to Refocus Your Mind - StumbleUpon Asking the right questions is the answer… It’s not the answers you get from others that will help you, but the questions you ask of yourself. Here are 40 thought-provoking questions to help you refresh and refocus your thinking: The Elements of Change ‘Without accepting the fact that everything changes, we cannot find perfect composure. But unfortunately, although it is true, it is difficult for us to accept it. Because we cannot accept the truth of transience, we suffer.’ 111 Lessons Life Taught Us Sometimes thinking about your life and sorting out what you have learned is just as important as tackling a new venture. That’s what our new sister site, Everyday Life Lessons, is all about. It’s an online community where people share, rank and discuss life’s greatest lessons. The site challenges you to reflect on your past, dig deep within yourself and answer one simple question: What has life taught you? Think about all the things you would love to tell yourself if you could travel back in time to give your younger self some advice about life.

Nick Knight SHOWstudio Gareth Pugh by Julia Pelzer Gareth Pugh by Julia Pelzer Asian Couture Federation by Julia Pelzer Simone Rocha by Julia Pelzer Jo Malone by Julia Pelzer Art Crush: (365) Days of Tumblr by Aaron Christopher Judd - Art Crush By Abby Wilcox 12 Feb 2012 @ 2:57 pm | Categorized: Art Crush, Live_Art> Every once in a while I stumble across something that pops off the screen, and today I couldn’t help but be mesmerized by (365) days of Tumblr – a Tumblr site by Canadian designer Aaron Christopher Judd. It’s a typography experiment, in which Judd has married a quote with an image, and posted on for every day of the year. The quotes are witty and sharp, and the images compelling. Enjoy our favorites! This Moment By Leo Babauta We all suffer, every day: worry, procrastination, anxiety, feeling overwhelmed, irritated, angry, frustrated, wishing things were different, comparing ourselves to others, worried we’re missing out, wishing other people would be different, feeling offended, loneliness, fear of failure, not wanting to do something, wishing we had less fat or bigger boobs or bigger muscles, angry at being controlled, wanting to find the perfect someone, wishing our partner was more perfect, stressed about finances, not wanting to think about problems, not knowing how to fix things, uncertain about choices, rushing from one task to the next, not liking our jobs. And yet, these problems are self-created. They’re real, but our tricky minds have created them.

"The egg" - Page 11 You were on your way home when you died. It was a car accident. Nothing particularly remarkable, but fatal nonetheless. You left behind a wife and two children. It was a painless death. 6 Questions That Will Make You Fee Peaceful and Complete “The best place to find a helping hand is at the end of your own arm.” ~Swedish Proverb When I was in my mid-twenties an unhealthy relationship with an unhealthy guy sent me packing off to the corner of New Mexico to find myself. In a new age, self-discovery kind of world—a hubbub of a town filled with people in transition—I was graced to meet many powerful healers, gurus, shamans, and teachers. I became a workshop junkie. 11 Practices That Will Make You Instantly More Positive - Alycia Hall - Vancouver Life Coach and Coaching Services - Alycia Hall – Vancouver Life Coach and Coaching Services Feeling positive doesn’t have to be the result of your external circumstances. You can learn to cultivate positivity anytime as long as you’re committed to it. Here are 11 practices that will make you instantly more positive! 1.