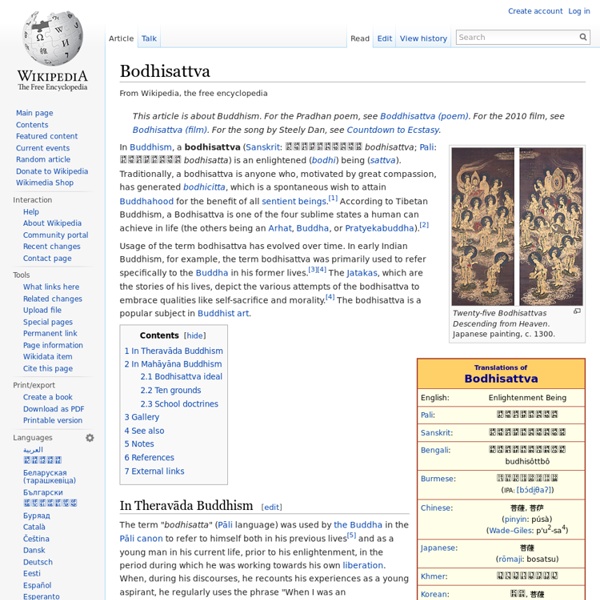 Twenty-five Bodhisattvas Descending from Heaven. Japanese painting, c. 1300. Usage of the term bodhisattva has evolved over time. In early Indian Buddhism, for example, the term bodhisattva was primarily used to refer specifically to the Buddha in his former lives.[3][4] The Jatakas, which are the stories of his lives, depict the various attempts of the bodhisattva to embrace qualities like self-sacrifice and morality.[4] The bodhisattva is a popular subject in Buddhist art. In Theravāda Buddhism[edit] The term "bodhisatta" (Pāli language) was used by the Buddha in the Pāli canon to refer to himself both in his previous lives[5] and as a young man in his current life, prior to his enlightenment, in the period during which he was working towards his own liberation. Paul Williams writes that some modern Theravada meditation masters in Thailand are popularly regarded as bodhisattvas.[12] Clay sculpture of a bodhisattva. In Mahāyāna Buddhism[edit] Bodhisattva ideal[edit] Ten grounds[edit]

Related:  Just So: An Odyssey into the Cosmic Web of Connection, Play, and True Pleasure • Alan Watts

article8011035 Vedanta philosophy refers to the term “Maya” as the cosmic illusion on account of which the one appears as many, the Absolute as the Relative. Adi Sankara in the hymn Bhaja Govinda, also known as Moha Mudgara, cautions people about the power of Maya by which this entire creation is constituted, pointed out Sri B. Sundarkumar in a lecture. ‘The world is only as real as the image that is seen in a mirror,’ says the acharya in the Dakshinamurthy Stotra. When this image of the world is seen within oneself, it is similar to what is seen by one due to an illusion. In the state of sleep, one sees many scenes that appear real.

Skandha Skandhas (Sanskrit) or khandhas (Pāḷi) means "heaps, aggregates, collections, groupings".[1] In Buddhism, it refers to the five aggregates of clinging (Pancha-upadanakkhanda), the five bodily and mental factors that take part in the rise of craving and clinging. They are also explained as the five factors that constitute and explain a sentient being’s person and personality,[2][4] but this is a later interpretation in response to sarvastivadin essentialism. The five aggregates or heaps are: form (or matter or body) (rupa), sensations (or feelings, received from form) (vedana), perceptions (samjna), mental activity or formations (sankhara), and consciousness (vijnana).[5][6][7] Etymology[edit]

en.m.wikipedia Prajñāpāramitā personified. From the Aṣṭasāhasrikā Prajñāpāramitā Sūtra. According to Edward Conze, the Prajñāpāramitā Sutras are "a collection of about forty texts ... composed somewhere on the Indian subcontinent between approximately 100 BC and AD 600 Five Tathagatas Cloth with painting of the Buddhas In Vajrayana Buddhism, the Five Tathāgatas (pañcatathāgata) or Five Wisdom Tathāgatas (Chinese: 五智如来; pinyin: Wǔzhì Rúlái), the Five Great Buddhas and the Five Jinas (Sanskrit for "conqueror" or "victor"), are emanations and representations of the five qualities of the Adi-Buddha or "first Buddha" Vairocana or Vajradhara, which is associated with the Dharmakāya.[1] They are also sometimes called the "dhyani-buddhas", a term first recorded in English by Brian Houghton Hodgson, a British Resident in Nepal,[2] in the early 19th century, and is unattested in any surviving traditional primary sources.[3] These five Buddhas are a common subject of Vajrayana mandalas.

www.britannica Prajnaparamita, (Sanskrit: “Perfection of Wisdom”) body of sutras and their commentaries that represents the oldest of the major forms of Mahayana Buddhism, one that radically extended the basic concept of ontological voidness (shunyata). The name denotes the female personification of the literature or of wisdom, sometimes called the Mother of All Buddhas. In the Prajnaparamita texts, prajna (wisdom), an aspect of the original Eightfold Path, has become the supreme paramita (perfection) and the primary avenue to nirvana. Impermanence Impermanence is a philosophical concept that appears in a variety of religions and philosophies. Indian religion[edit] The Pali word for impermanence, anicca, is a compound word consisting of "a" meaning non-, and "nicca" meaning "constant, continuous, permanent".[1] While 'nicca' is the concept of continuity and permanence, 'anicca' refers to its exact opposite; the absence of permanence and continuity. The term appears in the Rigveda, and is synonymous with the Sanskrit term anitya (a + nitya).[1][2] The term appears extensively in the Pali Canon.[1] Buddhism[edit] Anicca or impermanence is understood in Buddhism as the first of three marks of existence, the other two being dukkha (suffering, pain, unsatisfactoriness) and anatta (non-self, non-soul, no essence).[4][3][7]

en.m.wikipedia Popular Sutra in Mahāyāna Buddhism A reproduction of the palm-leaf manuscript in Siddham script, originally held at Hōryū-ji Temple, Japan; now located in the Tokyo National Museum at the Gallery of Hōryū—ji Treasure. The original copy may be the earliest extant Sanskrit manuscript dated to the 7th–8th century CE. The Heart Sūtra (Sanskrit: प्रज्ञापारमिताहृदय Prajñāpāramitāhṛdaya or Chinese: 心經 Xīnjīng, Tibetan: བཅོམ་ལྡན་འདས་མ་ཤེས་རབ་ཀྱི་ཕ་རོལ་ཏུ་ཕྱིན་པའི་སྙིང་པོ) is a popular sutra in Mahāyāna Buddhism. Its Sanskrit title, Prajñāpāramitāhṛdaya, can be translated as "The Heart of the Perfection of Wisdom". Mandala Spiritual and ritual symbol in Hinduism, Jainism and Buddhism Thangka painting of Manjuvajra mandala A mandala (Sanskrit: मण्डल, romanized: maṇḍala, lit. 'circle', [ˈmɐɳɖɐlɐ]) is a geometric configuration of symbols. In various spiritual traditions, mandalas may be employed for focusing attention of practitioners and adepts, as a spiritual guidance tool, for establishing a sacred space and as an aid to meditation and trance induction.

en.m.wikipedia Nihilism is also a characteristic that has been ascribed to time periods: for example, Jean Baudrillard and others have called postmodernity a nihilistic epoch,[4] and some Christian theologians and figures of religious authority have asserted that postmodernity[5] and many aspects of modernity[3] represent a rejection of theism, and that such rejection of their theistic doctrine entails nihilism. Forms of nihilism[edit] Nihilism has many definitions, and thus can describe philosophical positions that are arguably independent. Mahavairocana Tantra The Mahāvairocana Tantra (traditional Chinese: 大毘盧遮那成佛神變加持經; ; pinyin: Dà Pílúzhēnà Chéngfó Shénbiàn Jiāchí Jīng; also known as 大日经 Da ri Jing) is an important Vajrayana Buddhist text. It is also known as the Mahāvairocana Abhisaṃbodhi Tantra, or more fully as the Mahāvairocana Abhisaṃbodhi Vikurvita Adhiṣṭhāna Tantra. In Tibet it is considered to be a member of the Carya class of tantras. In Japan where it is known as the Mahāvairocana Sūtra (Daibirushana jōbutsu jinpen kajikyō), it is one of two central texts in the Shingon school, along with the Vajrasekhara Sutra. Both are also part of the Tendai school.

en.m.wikipedia Indian philosopher Nāgārjuna (c. 150 – c. 250 CE), (Tibetan: mGon-po kLu-grub) is widely considered one of the most important Buddhist philosophers.[2] Along with his disciple Āryadeva, he is considered the founder of the Madhyamaka school of Mahāyāna Buddhism.[2] Nāgārjuna is also credited with developing the philosophy of the Prajñāpāramitā sūtras and, by some sources, with having revealed these scriptures to the world after recovering them from the nāgas. He is traditionally thought to have written many treatises on rasayana, as well as serving a term as the head of Nālandā.[3] History Very little is reliably known of the life of Nāgārjuna, since the surviving accounts were written in Chinese[4] and Tibetan centuries after his death. According to a 4th/5th-century biography translated by Kumārajīva, Nāgārjuna was born into a Brahmin family[6] in Vidarbha[7][8][9] (a region of Maharashtra) and later became a Buddhist.