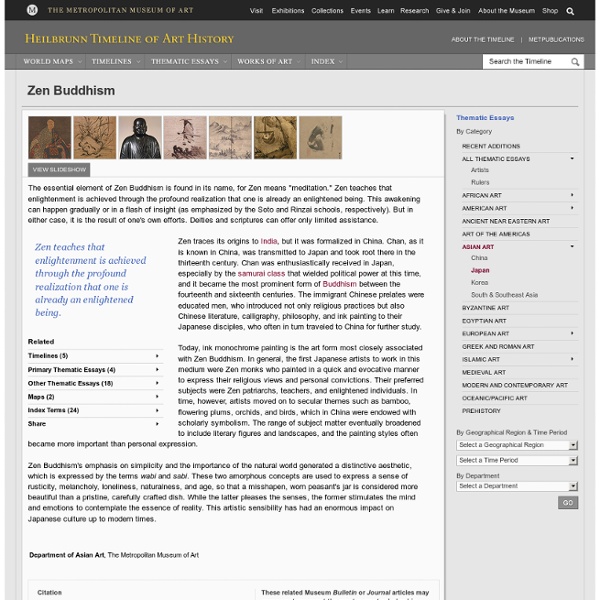 The essential element of Zen Buddhism is found in its name, for Zen means "meditation." Zen teaches that enlightenment is achieved through the profound realization that one is already an enlightened being. This awakening can happen gradually or in a flash of insight (as emphasized by the Soto and Rinzai schools, respectively). But in either case, it is the result of one's own efforts. Zen traces its origins to India, but it was formalized in China. Today, ink monochrome painting is the art form most closely associated with Zen Buddhism. Zen Buddhism's emphasis on simplicity and the importance of the natural world generated a distinctive aesthetic, which is expressed by the terms wabi and sabi. Related:  Buddhism

The Position of Women in Buddhism Today, when the role of Women in Society is an issue of worldwide interest it is opportune that we should pause to look at it from a Buddhist perspective. In the recent past, a number of books have been written on the changing status of women in Hindu and Islamic societies, but with regard to women in Buddhism, ever since the distinguished Pali scholar, Miss I.B. Horner, wrote her book on Women under Primitive Buddhism, as far back as 1930, very little interest has been taken in the subject. It seems, therefore, justified to raise again the question whether the position of women in Buddhist societies was better than that in non-Buddhist societies of Asia. Hugh Boyd who came as an envoy to the Kandyan Court in 1782 writes,[1] The Cingalese women exhibit a striking contrast to those of all other Oriental Nations in some of the most prominent and distinctive features of their character. Hence their evidence is all the more valuable.

Buddhism and the God-idea Do Buddhists believe in a god? No, we do not. There are several reasons for this. The Buddha, like modern sociologists and psychologists, believed that religious ideas and especially the god idea have their origins in fear. Gripped by fear people go to sacred mountains, sacred groves, sacred trees and shrines. Primitive humans found selves in a dangerous and hostile world, the fear of wild animals, of not being able to find enough food, of injury or disease, and of natural phenomena like thunder, lightning and volcanoes were constantly with them. The second reason the Buddha did not believe in a god is because there does not seem to be any evidence to support this idea. The third reason the Buddha did not believe in a god is that the belief is not necessary. But if there are no gods how did the universe get here? All religions have myths and stories which attempt to answer this question. What does the Buddha say about the origin of the universe? Not so.

Buddhism Vaults : Dalai Lamas Heart Sutra Talk, May 2001, SF Bay Area, California, Day 1 of 3. by Dave Evans - StumbleUpon Day 2Day 3 Introduction Today I was fortunate enough to sneak out of work for a few hours to hear His Holiness the Dalai Lama began a lecture on the Heart Sutra. This is a three day class and I'm going to sneak out of some work tomorrow and Attend Saturday during the day as well. I thought I'd share some of what he said (as interpreted through my notes) with everyone. Please forgive my spelling, my crutch... er, spell checker is not working currently. Tickets for the three day class were $150. His Holiness started this morning talking about the diversity of religions and then even the diversity of views within buddhism. I want to point out that these are just my notes of H.H.' I missed some of the afternoon session, couldn't sneak out of work for the whole thing, but I'll summarize as much detail as I have. The shoreline stage was decorated with a large backdrop picture of the palace in Lhasa, with a small decorated throne like chair in front for the fourteenth Dalai Lama to sit on.

Reincarnation - Buddhism and Reincarnation or Rebirth Would you be surprised if I told you that reincarnation is not a Buddhist teaching? If so, be surprised -- it isn't. "Reincarnation" normally is understood to be the transmigration of a soul to another body after death. There is no such teaching in Buddhism. One of the most fundamental doctrines of Buddhism is anatta, or anatman -- no soul or no self. However, Buddhists often speak of "rebirth." What Is the Self? The Buddha taught that what we think of as our "self" -- our ego, self-consciousness and personality -- is a creation of the skandhas. The Buddha said, “Oh, Bhikshu, every moment you are born, decay, and die.” This takes us to the Three Marks of Existence, in particular anicca, "impermanence." What Is Reborn? In his book What the Buddha Taught (1959), Theravada scholar Walpola Rahula asked, "When this physical body is no more capable of functioning, energies do not die with it, but continue to take some other shape or form, which we call another life. ... Karma and Rebirth

Love and Knowledge: Two Paths to the One Thomas J. McFarlane Summer 2000 Revised and edited for the web March 2004 www.integralscience.org Introduction In an ordinary Yoga one main power of being or one group of its powers is made the means, vehicle, path. In a synthetic Yoga all powers will be combined and included in the transmuting instrumentation. The paths are many, but the goal is one. The mystics and spiritual traditions of the world all acknowledge at least two main paths: the path of knowledge and wisdom (e.g., jnana yoga), and the path of love and devotion (e.g., bhakti yoga). The Path of Love and Devotion Be drunk on love, because love is all that exists. ...It is Love and the Lover that live eternally—Don't lend your heart to anything else; all else is borrowed. You must love the Lord your God with all your heart, with all your soul, and with all your mind. Across all traditions and times we can hear mystics pouring their hearts out to the Divine in ecstatic poetry. This is no path for the faint of heart.

» 12 Essential Rules to Live More Like a Zen Monk “We have more possibilities available in each moment than we realize.” - Thich Nhat Hanh By Leo Babauta I’m not a Zen monk, nor will I ever become one. You probably don’t want to become a Zen monk either, but you can live your life in a more Zen-like manner by following a few simple rules. Why live more like a Zen monk? One of my favorite Zen monks, Thich Nhat Hanh, simplified the rules in just a few words: “Smile, breathe and go slowly.” However, for those who would like a little more detail, I thought I’d share some of the things I’ve discovered to work very well in my experiments with Zen-like living. “Zen is not some kind of excitement, but concentration on our usual everyday routine.” - Shunryu Suzuki Do one thing at a time. “Before enlightenment chop wood and carry water.

A Bite of Buddhism | Psychology Today - StumbleUpon The four sublime mental states are qualities of mind that we cultivate in order to alleviate the suffering we experience in everyday life and to feel more connected to others—and the worries and fears we all share. In the language of the Buddha (Pali), they are called the brahma viharas , which means "the dwelling place of awakened beings." The good news for us unawakened beings is that it's easy to begin cultivating the brahma viharas . Indeed, they are an integral part of other religious, spiritual, and humanistic traditions. I present them here with a distinctly Buddhist "flavor." Metta . I like to think of metta as the simple act of well-wishing. Sylvia once said that she practices metta by just looking at a person and silently saying, "I love you." Karuna . The Vietnamese Zen master, Thich Nhat Hanh, helped me learn to cultivate compassion for myself. Mudita . Just as metta is an antidote for our judgmental tendencies, mudita is the perfect antidote for envy. Upekkha .