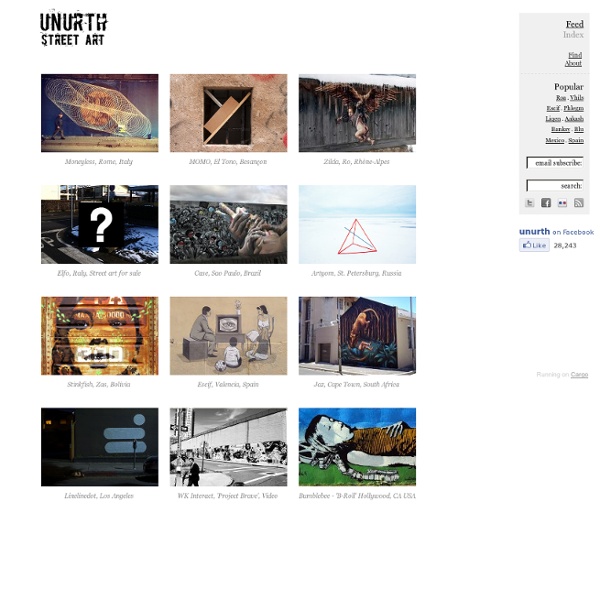 La Pandilla New Mural In Progress, Miami Your Ultimate Street Art News Site La Pandilla is a Puerto Rican based duo, they are currently in Miami painting this new mural in the Wynwood Art Districts for Art Basel 2011. With amazing technical skills these two are up and coming, so keep 'em on your radar and check back with us soon for the completed piece. - STREET ART UTOPIA More info. Let us begin with this words that come as a response to the photo above: “There´s tools and colours for all of us, to lend from nature to make the world more understandable and beautiful”. 1# Click on a photo and you make it bigger and can post a comment on it. 2# Make sure that you read the story in the end! 3# Feel free to reblog this, only remember to link back to this post. More info.

Street art John Fekner: Broken Promises/Falsas Promesas, South Bronx, 1980. The terms "urban art", "guerrilla art", "post-graffiti" and "neo-graffiti" are also sometimes used when referring to artwork created in these contexts.[1] Traditional spray-painted graffiti artwork itself is often included in this category, excluding territorial graffiti or pure vandalism. Artists who choose the streets as their gallery are often doing so from a preference to communicate directly with the public at large, free from perceived confines of the formal art world.[2] Street artists sometimes present socially relevant content infused with esthetic value, to attract attention to a cause or as a form of "art provocation".[3] Street artists often travel between countries to spread their designs.

PhD Comics Coming Soon - Stay tuned for a BIG announcement about an awesome project Jorge is working on! PHD Store - Our store was down for a while, but now it is back! Free excerpt from The PHD Movie 2! - Watch this free clip from the movie that Nature called "Astute, funny"! Watch the new movie! - The PHD Movie 2 screenings are in full swing! 106 of the most beloved Street Art Photos – Year 2010 More info. More info. More Banksy on Street Art Utopia. More info. graffitimundo - Buenos Aires Street Art & Graffiti Parque Patricios is a barrio to watch. It’s a fairly traditional, residential neighbourhood boasting some beautiful turn of the century architecture, a large park and a newly opened subte line. A huge amount of investment has gone into the barrio in recent years, and one of the latest projects has been to develop an an entire neighbourhood block adjacent to the park into the new site for Banco Ciudad. Arte Patricios was an innovative event which brought together dozens of artists over a single weekend to create an open air art gallery around the the perimeter of the construction site for Banco Ciudad.

Malarky x VNA Magazine Hookedblog regular Malarky continues to dominate the East London landscape with the addition of this new shutter above near Petticoat Lane market. The artist is set to feature in the upcoming issue of Very Nearly Almost magazine which is due for release in early December. The team at the magazine caught up with Malarky in this short video interview as he painted the featured shutter. Directed by JOÃO RETORTA Music 2Hot by JAM CIITY In other news, the group exhibition 'Neo Cosmo' featuring Malarky, Mr. 15 Creative Street Art Ideas from OakoAk French blog OaKoAk has a very cool collection of creative street art examples, and we want to share our 15 best picks with you. But before you start scrolling down the list, I’m going to take the liberty of reposting here a comment made on our Facebook page by Mike Aftanake: “This is today’s art, not the phony abstract ugly pieces they gather in modern art museums. This is alive…”

Brooklyn Street Art - ...loves you more every day. : Brooklyn Street Art Posted on April 7, 2014 “After photographing in the mosh pits for awhile I began to get familiar with patterns in the music. Eventually it got to the point where I could sense the moment coming when things would really cut loose and go berserk,” says painter Dan Witz about his process and method for catching the moment when the roiling mass of hardcore music fans hit the perfect state of frenzy. “NY Hardcore Paintings”, opening this past Saturday night and on view currently at The Jonathan Levine gallery in Chelsea, presents Witz with his new body of convulsing bodies and to say they are a revelation is only part of the story. When we saw his first mosh pit paintings a few years ago we were struck by the raw thrilling chaotic energy and calculated abandon in them – and reminded of many such nights in the 80s and 90s in lower Manhattan when we also joined in the fray. Dan Witz “NY Hardcore” Jonathan LeVine Gallery (Photo © Jaime Rojo)

The Street Work of Banksy: British Graffiti Artist Banksy is the pseudonym of a British graffiti artist, political activist and painter, whose identity is unconfirmed. Using a unique stenciling technique Banksy’s artistic works of political and social commentary have been featured on streets, walls, and bridges of cities throughout the world. Here we’ll show you some of the best work from this international street artist Banksy. Be sure to check out Banksy.co.uk And the Online Shop Banksy.co.ukOnline Shop

INTI "Our Utopia Is Their Future" New Mural In Paris, France StreetArtNews While you discovered some progress pictures last week (covered), INTI has now completed his massive new piece in Paris, France. Entitled "Our Utopia Is Their Future", the Chilean painter delivers a stunning mural featuring one of his signature characters. If you are in the area, this one can be seen on Avenue D'Italie, Paris 13th.