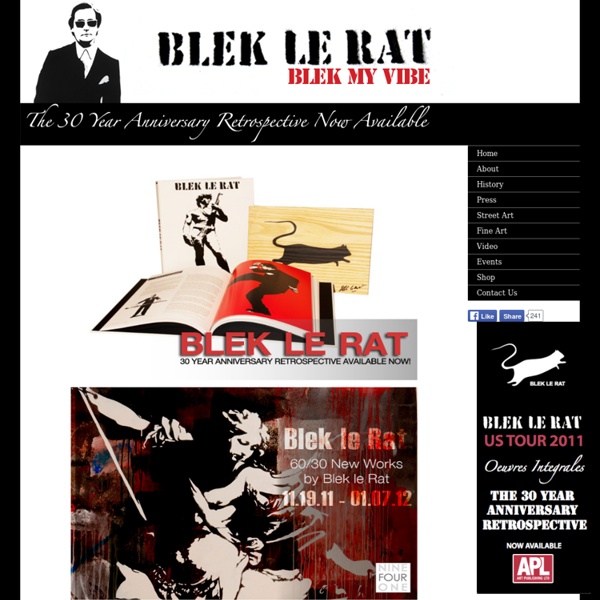 Blek le Rat: This is not a Banksy - Features, Art Now, with auction houses aflutter at the prospect of bagging a work by the elusive Bristolian, and Brad Pitt among those eagerly queuing to pay tens of thousands of pounds for a piece, even the most entrenched critics are being forced to re-evaluate their position on the subject of that formerly dirty word. Late last year a grainy photo of a crouched figure in front of a wall filled news pages and news channels alike, below the headline: "Is This Banksy?" Such is the hype surrounding the shadow that creeps in the night, that Banksy – in his absence – has been crowned the Daddy of anti-Establishment street art. Yet, if Banksy is indeed the Daddy of politically-conscious graffiti, let me introduce the Godfather, Blek Le Rat. The 56-year-old Frenchman was stencilling city walls while Banksy was getting to grips with crayons.

画图男 Finish the works with Seth globepainter in Fengjing, Shanghai 2015 Art Work “Wisdom Eye ” Ink on paper 57cm*75cm 《BLUE DREAM ·蓝梦》 Spray paint and acrylic on canvas 4.3M*12M Work in Guangzhou C215 (street artist) Stencil by C215 in Brooklyn NY (photo by dumbonyc) C215, is the moniker of Christian Guémy, a French street artist hailing from Paris who has been described as "France's answer to Banksy".[1] C215 primarily uses stencils to produce his art. His first stencil work was put up in 2006, but he has been a graffiti artist for (as of 2011) over 20 years.[2] His work consists mainly of close up portraits of people. Surrealistic Paintings by Vladimir Kush Today we want to show you beautiful artworks of Russian artist Vladimir Kush. This surrealist inspires by the works of Salvador Dali and you can see it in his paintings. According to experts, Vladimir perhaps is one of the most talented surrealists of our time. Each painting is fascinating by stunning fantasy stories, game with metamorphic! If you are a fan of surrealism, you’ll get a real pleasure by watching artworks of this talented author!

Blek le Rat Xavier Prou (Blek le Rat) at the gallery opening and book signing at the 941 Geary Gallery, San Francisco Blek le Rat, (pronounced: [blɛk lə ʁa]; born Xavier Prou,[1] 1952)[2] was one of the first graffiti artists in Paris, and has been described as the "Father of stencil graffiti".[3] Early life[edit] Xavier Prou was born in Boulogne-Billancourt in the western suburbs of Paris in 1951 or 1952. Early career and influence[edit] Urban Archives Database Home » Urban Archives Database The Urban Archives project contributes to the body of knowledge on urban communication. Since 2004, University of Washington students have been documenting Seattle's streets and conducting original research using a variety of approaches and perspectives. Using photography, students carry out field research by capturing urban texts such as graffiti, public art, advertising, signage, and architectural design. Original photographs of urban texts are archived, annotated and shared with the community for further research and analysis.

M. Chat M. Chat on a Paris building, spring 2002 M. Chat in Sarajevo, Bosnia and Herzegovina M. 35 Fantasy art masterpieces of character design history About: Gonzalo Ordóñez Arias (GENZOMAN) Gonzalo Ordoñez Arias, Is an extraordinary digital artist and painter of fantasy art. He was born in Arica, in the north of Chile (a port city) and now lives in the capital, Santiago. He started copying drawings of his favorite cartoonists and comics at school.

Blek le Rat meets Banksy in the Mission A tipster sent us these pics of the latest addition to the ongoing collaborative mural by Public Works started by Banksy during his 2010 promotional surge through the city. This augmentation was allegedly added by none other than French pioneering stencil artist Blek Le Rat. More pics after the jump.

Jef Aérosol Perroy at work in Paris Jef Aérosol is the pseudonym of Jean-François Perroy (born January 15, 1957[1]), a French stencil graffiti artist. He has been an urban art proponent in France since 1982, and is a contemporary of Blek le Rat and Speedy Graphito. Perroy was born in Nantes. He spray painted his first stencil in 1982, in Tours, and has been living in Lille since 1984. He has left his works on the walls of many cities in Western Europe and the United States, as well as Beijing, Tokyo, Buenos Aires and Reunion Island. Top Ten Fastest Cars 2011 By admin on Tuesday, March 16th, 2010 | 1 Comment 1. SSC Ultimate Aero: This car is number one for 10 top list Fastest Cars In The World. 257 mph. 0-60 in 2.7 secs. Twin-Turbo V8 Engine with 1183 hp. The SSC Ultimate Aero takes the lead as the fastest car in the world beating Bugatti Veyron. base price is $654,400.