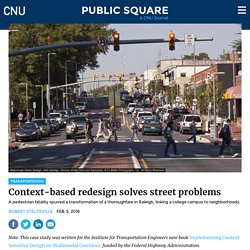 A wide suburban arterial road separating the campus of North Carolina State University from city neighborhoods was transformed through traffic-calming techniques (see photo above). Great Idea: Context-based street design. In celebration of the 25th Congress for the New Urbanism, Public Square is running the series 25 Great Ideas of the New Urbanism. 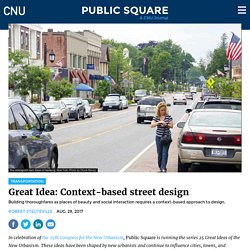 These ideas have been shaped by new urbanists and continue to influence cities, towns, and suburbs. The series is meant to inspire and challenge those working toward complete communities in the next quarter century. For much of the last century, thoroughfares were designed for maximum motor-vehicle mobility, often making cities and towns dysfunctional for people outside of cars. In walkable neighborhoods and centers, streets are public spaces that serve multiple social and economic functions while contributing to the beauty and character of a community. Such thoroughfares include main streets, boulevards, avenues, "shared space" streets, and local streets designed for slow traffic speeds. Reimagining our roads: 5 designs to improve our cities - Curbed. In the quest to create more pedestrian-friendly cities, urban planners often carve out space in obvious places like parks, greenways, and waterfronts. 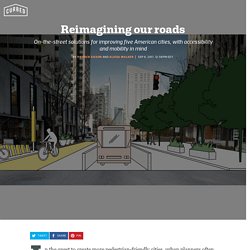 But in many ways, the most abundant resource that municipalities can tap to shift how their cities work is their streets, which cover huge swaths of city property (in Los Angeles, 14 percent of incorporated land is dedicated to parking alone). Roadways aren’t just the arteries of transportation and commerce, they can be the catalysts for more sustainable design, boosting economic activity, improving accessibility, and creating healthier, more resilient communities. How can strips of asphalt become something transformative? Earlier this year, the National Association of City Transportation Officials (NACTO) released the Global Street Design Guide, a compendium of innovative case studies from more than 70 countries across the globe, addressing everything from bus-rapid transit to bike lanes, parklets to pedestrian plazas.

A Wonderfully Clear Explanation of How Road Diets Work. How fire chiefs and traffic engineers make places less safe. Here's The First Glow-In-The-Dark Bike Lane In The U.S. The City of Seattle no longer wants to bank at Wells Fargo. 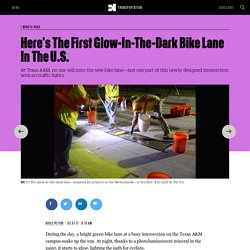 Driven by the fact that the bank is helping fund the Dakota Access Pipeline—and the bank's fraudulent account scandal that surfaced in 2016—the Seattle City Council passed a bill to pull its money out of Wells Fargo when its current contract expires in 2018. The city already had a law to consider socially responsible business practices when choosing a bank, but now those criteria will be stronger.

The bill also specifically directs the mayor to give notice to Wells Fargo that the city won't renew its contract. The mayor has indicated he'll sign the bill. "Recently, in light of legal findings against Wells Fargo, and because of concern about Wells Fargo's participation in DAPL, people started asking, why is it that our socially responsible banking practices didn't catch this?

" In September 2016, news hit about the bank opening as many as two million fake accounts since 2005, leading to $185 million in fines. 50 Reasons Why Everyone Should Want More Walkable Streets. How to Design the Perfect City Intersection. If you think the only purpose of intersections is to move cars past each other, you solve problems like a plumber: with bigger pipes. 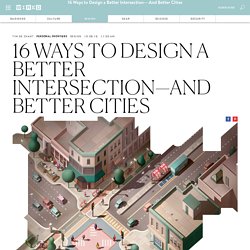 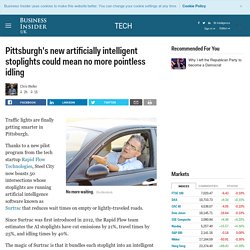 Shutterstock Traffic lights are finally getting smarter in Pittsburgh. Thanks to a new pilot program from the tech startup Rapid Flow Technologies, Steel City now boasts 50 intersections whose stoplights are running artificial intelligence software known as Surtrac that reduces wait times on empty or lightly-traveled roads. Since Surtrac was first introduced in 2012, the Rapid Flow team estimates the AI stoplights have cut emissions by 21%, travel times by 25%, and idling times by 40%. The skinny on healthy neighborhoods. Scientists are learning more and more about how where we live affects the amount of exercise we get, and thus how fit and healthy we are likely to be. 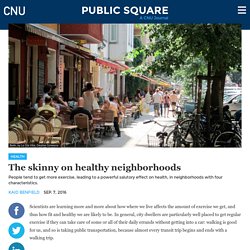 In general, city dwellers are particularly well placed to get regular exercise if they can take care of some or all of their daily errands without getting into a car: walking is good for us, and so is taking public transportation, because almost every transit trip begins and ends with a walking trip. The subject fascinates me, and I have written about it often, most recently with respect to the demand for walkable neighborhoods and some of the city planning tools that can help provide them. (See also this article from 2014.) A massive Utah study from 2008 reported on WebMD found that “people in the study who lived in the most walkable neighborhoods weighed an average of 8 pounds less than people who lived in the least walkable areas.” (The full study is here.)

Planetizen: The independent resource for people passionate about planning and related fields. Congestion Pricing May Reduce Traffic, but Also Create a Loss in Productivity in City Centers. Traffic jams aren’t fun for anyone. 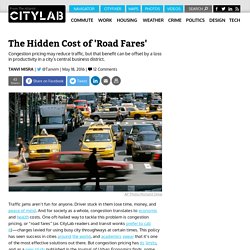 Driver stuck in them lose time, money, and peace of mind. And for society as a whole, congestion translates to economic and health costs. New "Diverging Diamond" Intersection Design Cuts Crashes by Sixty Percent. How seven cities are inventing the future of transportation - Washington Post. 12 of America's Most Questionable Highway Expansion Projects. When Texas expanded the Katy Freeway in Houston a few years back, the expectation was that making the massive road even wider would relieve traffic. 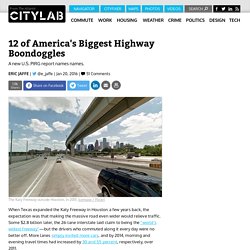 Some $2.8 billion later, the 26-lane interstate laid claim to being the “world's widest freeway”—but the drivers who commuted along it every day were no better off. More lanes simply invited more cars, and by 2014, morning and evening travel times had increased by 30 and 55 percent, respectively, over 2011. How Parking Spaces Are Eating Our Cities Alive. How much space does your car take up? 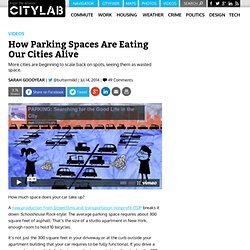 A new production from Streetfilms and transportation nonprofit ITDP breaks it down Schoolhouse Rock-style: The average parking space requires about 300 square feet of asphalt. That’s the size of a studio apartment in New York, enough room to hold 10 bicycles. A Redesigned Parking Sign So Simple That You’ll Never Get Towed. An earlier iteration of Sylianteng’s redesigned parking sign. Nikki Sylianteng Your car gets towed, and who do you blame? Yourself? A Great Place to Put Community Health Clinics: Fire Stations. City officials in Hayward, California, broke ground this month on a new fire station that includes a first in community design for the city, the county, the state, and maybe even the nation: a built-in health clinic. Does San Francisco's Smart Parking System Reduce Cruising for a Space? Last week, the San Francisco Municipal Transportation Agency released yet more evidence that the city's SFpark system has been a great success.

How Parking Lots Became the Scourge of American Downtowns. The downtowns of many American cities are hollowed out by the disastrous impacts of planning events that took place decades ago. Lessons-from-seattle-rtp-and-kendall-square-how-innovation-districts-are-born. Redesigning Crosswalks Into A Network Of Mini-Parks To Save Pedestrian Lives. Even though San Francisco is known as a walkable city, it isn’t exactly safe: On average, three pedestrians are hit by cars every day. To Make Roads Safe, Make Them Feel Dangerous. A new study adds weight to the idea that heightening drivers' sense of risk may actually cut down on traffic collisions.