Reframed: Artists Seeking Social Change Bring the Public into the Picture. There’s an art of conversation, to be sure, but can conversations themselves be art? 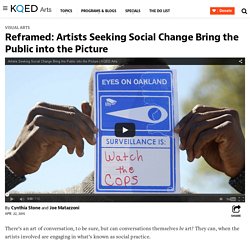 They can, when the artists involved are engaging in what’s known as social practice. Social practice projects might look like just about anything — journalism, community organizing, even a shop. The goal is to create social change by staging actions that engage people and make them think – and talk. “For me,” says social-practice artist and professor Stephanie Syjuco, “the best social practice projects actually try to attract people to join a conversation.”

Two artists, Chris Treggiari and Chris Johnson, recently went into the streets of Oakland to record conversations and make art. Why Don’t Murals Get Covered By Graffiti in the Mission? As part of our series, Bay Curious, we’re answering questions from KQED listeners and readers. 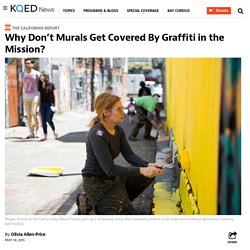 This question comes from Mission District resident Rebecca Busch, who wanted to know: I think it’s interesting that murals don’t get covered in graffiti. Why do some murals stay up for a really long time, even in communities where there’s lots of graffiti on random walls and buildings? San Francisco’s Clarion Alley is considered by many to be the heart of the mural scene in the Bay Area. The street is lined with massive, vibrant murals that tackle subjects like gentrification, corporate greed and the environment.

“Tags happen to some degree every week,” says Megan Wilson, director of the Clarion Alley Mural Project, the group that curates the alleyway. Though graffiti often marks up the perimeter of the murals, it’s rare to find a tag cutting directly across the detailed center of the artwork, says Wilson. At play is an unspoken set of rules that artists follow. A mural on The Women’s Building. Treats in the Streets: Artist Jim Bachor Fills Potholes with Ice Cream Mosaics. For the third year in a row Chicago artist Jim Bachor (previously here and here) has taken it upon himself to preemptively fix city potholes by filling them with themed mosaics. 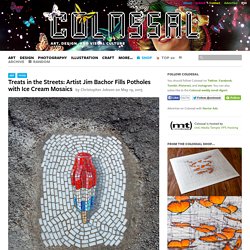 This year Bachor decided on a series of 10 pothole mosaics called Treats in the Streets featuring different kinds of ice cream. At the latest count, four artworks have appeared in locations around Chicago, and he traveled all the way to Jyväskylä, Finland last week to do three more mosaics including a local popsicle-like dessert called Amppari-mehujaa. Bachor says to keep an eye out for three more pieces back home in Chicago sometime before spring is out. Bricksy: Artist reimagines Banksy's graffiti artwork in Lego, in pictures. Slinkachu frames miniatures within a metropolis for london exhibit. Mar 04, 2015 slinkachu frames miniatures within a metropolis for london exhibit slinkachu frames miniatures within a metropolis for london exhibit(above) landscape painting — parliament hill, hampstead / london 2014all images courtesy of slinkachu slinkachu: miniaturesqueandipa gallery, londonmarch 13th – april 11, 2015 since 2006, slinkachu has been leaving his miniature figures on the streets of cities around the world. each scenario borders between irony, humor, fantasy and reality, taking cues from art and popular culture. his latest series of work is presented at london’s andipa gallery for the exhibition ‘miniaturesque’, comprising seventeen new images on paper and aluminium as well as new sculptural pieces, one of which is the artist’s largest to date. 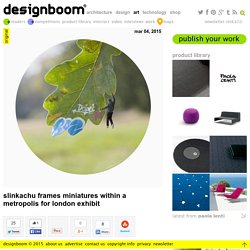 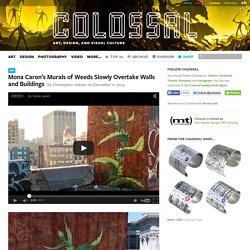 Caron has recently painted murals of weeds in her native Switzerland, India, and around her current home in San Francisco in what she describes as “a tribute to the resilience of all those beings who no one made room for, were not part of the plan, and yet keep coming back, pushing through and rising up.” Definitely watch the video above to see more of these plants coming to life, and you can learn more here. (via Laughing Squid) One Tasty Wall: Cake Icing Used to Make Street Art. Just when you thought you’d seen all the mediums possible for street art (from chalk to yarn), here comes an artist creating fascinating work with cake frosting. 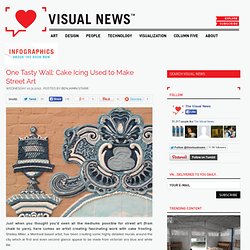 Shelley Miller, a Montreal based artist, has been creating some highly detailed murals around the city which at first and even second glance appear to be made from victorian era blue and white tile. For most of her works Miller creates tiles of sugar and decorates them before affixing them to her chosen wall surface, using nothing more than sugar frosting for the task. Then in what is almost the culinary version of Andy Goldsworthy’s temporal works (which are often destroyed by nature), these sugar based pieces slowly melt away. For many, their dripping blue forms are the first clue that they are even made of food ingredients. As it simply washes away with the rain, this art should also keep city officials fat and happy.