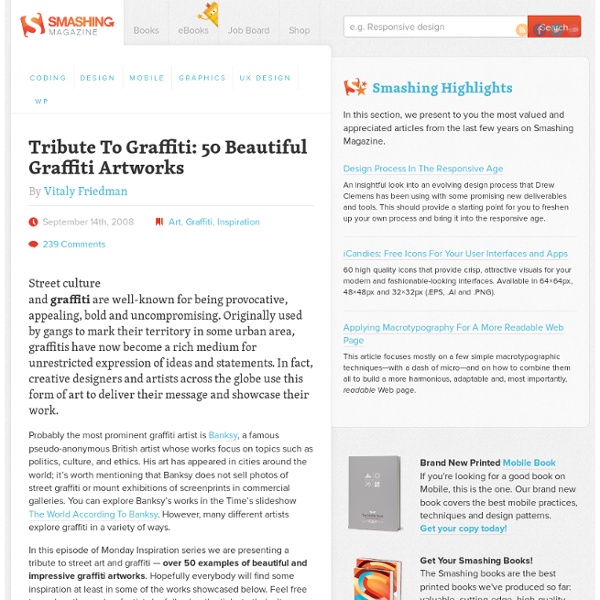 Advertisement Street culture and graffiti are well-known for being provocative, appealing, bold and uncompromising. Originally used by gangs to mark their territory in some urban area, graffitis have now become a rich medium for unrestricted expression of ideas and statements. In fact, creative designers and artists across the globe use this form of art to deliver their message and showcase their work. Probably the most prominent graffiti artist is Banksy1, a famous pseudo-anonymous British artist whose works focus on topics such as politics, culture, and ethics. In this episode of Monday Inspiration series we are presenting a tribute to street art and graffiti — over 50 examples of beautiful and impressive graffiti artworks. Graffiti Art Michael.jh3 Mrzer4 Deuce 75 zevs6 imminentdisaster7 Banksy8 Marquis Lewis9 Retna Saber Revok SeventhLetter10 Mr Mucho11 Gaia12 Wall Spankers Project13 Our goal is to bring together international artists and designers in a collaborative, sharing environment. Muck

Colorful Art Writers: 10 of the Best Graffiti Artists Humans have been expressing themselves by scrawling on walls since the earliest people lived in caves. But it wasn’t until the 1970s that we started taking our messages to the walls, trains and sidewalks of urban environments around the world. The graffiti movement, seen by some as mere vandalism, actually encompasses some impressive and talented artists. They’re attracted by the freedom that graffiti provides; the ability to simply make something without constraints. Some are also involved in more widely-accepted art forums, such as gallery shows, but many choose to remain anonymous and shrouded in a world of secrecy, pseudonyms, and spray paint. Swoon (images via: Luna Park) Female artists are usually under-represented in the graffiti world for a variety of reasons. (images via: Mercurialn) Michael Tracy, also known as TRACY168, has been called one of the grandfathers of graffiti art. Lady Pink (images via: Pinksmith and Rockey’s Photography) Banksy (images via: unusualimage) Seak Blek le Rat

Graffiti art to boost your inspiration Graffiti (or spray paint) often regarded by others as unsightly damage or unwanted vandalism. But some times, the boring wall is supplied with a true piece of graffiti art, making it a joy for the eyes. A new game from Atari, Getting Up, is based on tagging. I made a collection of pictures showing these fine spray paint creations. By looking at them and studying the details, you could boost your (Photoshop) design inspiration. Please take note that I'm not showing any graffiti tags or space spray paint in this article. Beautiful graffiti art Click on the images to enlarge. Sources Actually, the last one indeed is a tag. I still can't believe some of them are actually graffiti. Tags: graffiti art photoshop design inspiration Interested in this topic?

Boston Graffiti Graffiti and Street Art - level 1 The Story of Street Art Modern graffiti began in big cities in the United States in the 1970s. In New York, young people wrote their names or “tags” in pen on walls around the city. One of the first “taggers” was a teenager called Demetrius. Then, some teenagers started writing their tags with aerosol paint. In the 1990s and 2000s, a lot of graffiti artists started painting pictures. Graffiti in Galleries In some countries, writing or painting on walls is a crime. In Bristol in the UK, there is a street art festival in August every year. Who are the Artists? Some street artists have become famous. Os Gemeos are twin brothers from Sao Paulo in Brazil. Blek le rat is from Paris. Faith 47 is from Cape Town in South Africa. The Future of Street Art Many street artists use the internet to look at photos of street art from around the world. Robin Newton

# Amazing pieces of street art by Russian artist Pavel Puhov. I absolutely love this playful interaction with urban surroundings. More pieces at Street Art Utopia. The 5 Most Terrifying Weapons Ever Created | The Daily Interweb Like many people, I am fascinated by the human capacity for violence and destruction. Now, the stuff you see on the news, fires, shootings etc. is all pretty morbid but it is nothing compared to what humans are really capable of if we put our minds to it. You see, when I am surfing the web, it is inevitable that my ADD will kick in, and I will mindlessly click through Wikipedia for hours. The information I found regarding some of mankind’s most awesome and destructive weapons was truly terrifying. Yet while using them may be a terrible idea, sharing their destructive capabilities with the world isn’t. 5. I begin with a weapon that has already seen active duty for over 30 years. 4. Our next terrifying weapon isn’t terrifying because of its destructive power, size, or speed. Robot wars. Even though the Predator is remote controlled, it is the first step that I believe will eventually lead to robot warfare. 3. Star Wars fans might like this one. Picture this scenario. 2.

URBAN ROOTS 40 Striking Examples of Graffiti Art Graffiti has existed since ancient times with examples dating back to Ancient Greece and the Roman Empire. In modern times, spray paint, regular paint and markers are the most commonly used materials. Although the defacing of property is a crime punishable by law, many artists choose to express themselves this way. This form of art is also used by some for communicating social and political messages. For this post, we’ve compiled a collection of 40 striking examples of Graffiti Art. Compiled exclusively for WDD by Jarkko Laine. Which ones were your favorites?