Men, Here’s What You Can Do to Stop Street Harassment - VICE. #WhenIWas Features Chilling Stories From Women Who Were Sexually Harassed as Children. Voters in New York headed to the polls on Tuesday in primaries that may cement Hillary Clinton and Donald Trump's roles as their parties' respective frontrunners. 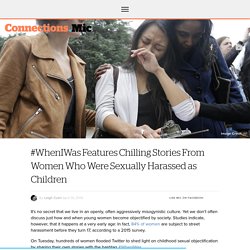 With Clinton looking to hold off a nationally surging Bernie Sanders following a string of losses to the progressive populist, Empire State Democrats look poised to deliver their former senator a momentum-building victory as the race enters its final stretch. Meanwhile, Trump hopes that a landslide victory will bring him close winning all of the state's 95 Republican delegates, although the billionaire is likely to fall short of a clean sweep, which would require majority support both statewide and in each of New York's 27 congressional districts.

Read more: •Questions Mount After Thousands of New York Democrats Purged From Voter Rolls•New York Democratic Primary 2016: Latest Polls and What to Expect•New York GOP Primary 2016: Latest Polls and What to Expect in the Republican Race With polls set to close at 9 p.m. Huffingtonpost. Why You Shouldn’t Tell That Random Girl On The Street That She’s Hot » Brute Reason. Ah, spring. 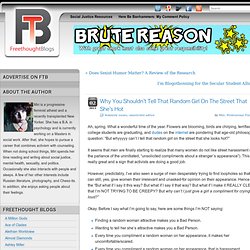 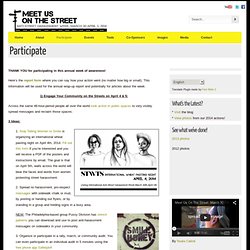 Here’s the report form where you can say how your action went (no matter how big or small). This information will be used for the annual wrap-up report and potentially for articles about the week. 1) Engage Your Community on the Streets on April 4 & 5: Across the same 48-hour-period people all over the world took action in public spaces to very visibly spread messages and reclaim those spaces. 3 Ideas: 1. 2. Use Art to Raise Awareness. Art of all forms has the power to move people and creative portrayals of street harassment issues can help raise community awareness that it is a problem. 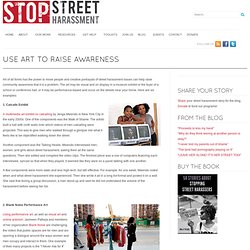 The art may be visual and on display in a museum exhibit or the foyer of a school or conference hall, or it may be performance-based and occur on the streets near your home. Here are six examples: 1. Catcalls Exhibit A multimedia art exhibit on catcalling by Jenga Mwendo in New York City in the early 2000s. Another component was the Talking Heads. A few components were more static and less high-tech, but still effective. 2. Using performance art, as well as visual art and online activism, Jasmeen Patheja and members of her organization Blank Noise are challenging the notion that public spaces are for men and are opening a dialogue around the ways women and men occupy and interact in them. 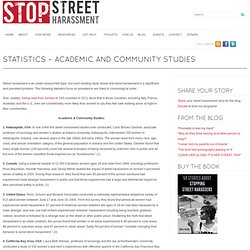 The following statistics focus on prevalence are listed in chronological order. Also, notably, Gallup data from surveys in 143 countries in 2011 show that in those countries, including Italy, France, Australia, and the U.S., men are considerably more likely than women to say they feel safe walking alone at night in their communities. Statistics- Stop Street Harassment. Catcalls Are Not Compliments: Challenging Street Harassment Worldwide. When I was in sixth grade, I had to walk a long way home from the bus stop. 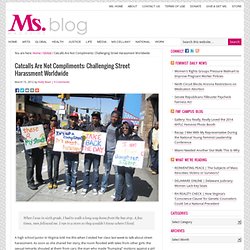 A few times, men followed me. I ran to a store so they wouldn’t know where I lived. A high school junior in Virginia told me this when I visited her class last week to talk about street harassment. As soon as she shared her story, the room flooded with tales from other girls: the sexual remarks shouted at them from cars; the man who made “humping” motions against a girl on a public bus; the “creepy men” following them in stores; the men masturbating in front of them at public swimming pools; the man who told a girl on her bike to “get in the car.” For many of the girls, this was the first time talking about these experiences. Sh*t Men Say to Men who Say Sh*t to Women on the Street- Stop Street Harassment. Editor’s Note: Bix Gabriel and Joe Samalin are part of the NYC team that created the new video “Shit Men Say to Men who Say Shit to Women on the Street” that’s been viewed nearly 50,000 times in less than one day and was made for International Anti-Street Harassment Week. 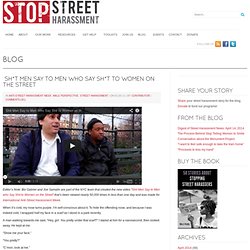 When it’s cold, my nose turns purple. I’m self-conscious about it. To hide the offending nose, and because I was indeed cold, I wrapped half my face in a scarf as I stood in a park recently. A man walking towards me said, “Hey, girl. Ottawa Hollaback! Why men can't – and shouldn't – stop staring at women. Before we discuss why it is men can't and shouldn't stop looking at women in the street, I'd like to explain about the girl in the miniskirt on the bicycle. 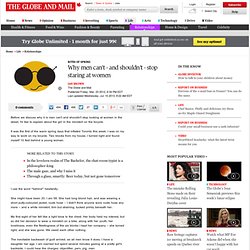 It was the first of the warm spring days that inflated Toronto this week. I was on my way to work on my bicycle. Two blocks from my house, I turned right and found myself 10 feet behind a young woman. I use the word “behind” hesitantly. She might have been 20. My first sight of her felt like a light blow to the chest. The inevitable backwash of guilt arrived, as all men know it does. But it was such a beautiful day. Details that catch my attention: lively calves, French blue puff skirts with white polka dots, red shoes, dark skin, olive skin, pale skin, lips (various shapes), curly hair (to my surprise). But each woman makes you think, parse her appeal. #Ididnotreport that these streets do not belong to me. Tabby Kinder Increasingly I feel awkward and embarrassed when walking around my city. 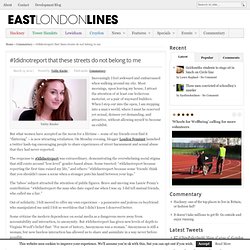 Most mornings, upon leaving my house, I attract the attention of at least one lecherous motorist, or a pair of wayward builders. When I step out into the open, I am stepping into a man’s world, where I must be reserved yet sexual, demure yet demanding, and attractive, without allowing myself to become an exhibit. But what women have accepted as the norm for a lifetime – some of my friends even find it “flattering” – is now attracting retaliation. On Monday evening, blogger London Feminist launched a twitter hash-tag encouraging people to share experiences of street harassment and sexual abuse that they had never reported. The response to #Ididnotreport was extraordinary, demonstrating the overwhelming social stigma that still exists around “low-level” gender-based abuse.

The ‘taboo’ subject attracted the attention of public figures.