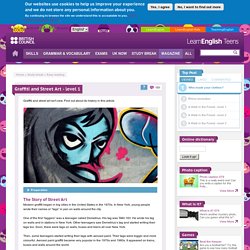 In New York, young people wrote their names or “tags” in pen on walls around the city. One of the first “taggers” was a teenager called Demetrius. His tag was TAKI 183. He wrote his tag on walls and in stations in New York. Then, some teenagers started writing their tags with aerosol paint. In the 1990s and 2000s, a lot of graffiti artists started painting pictures. Graffiti in Galleries In some countries, writing or painting on walls is a crime.

In Bristol in the UK, there is a street art festival in August every year. Who are the Artists? Some street artists have become famous. Os Gemeos are twin brothers from Sao Paulo in Brazil. Blek le rat is from Paris. Faith 47 is from Cape Town in South Africa. The Future of Street Art Many street artists use the internet to look at photos of street art from around the world. The Reverse Graffiti Project. Graffiti - Pfizer Commercial. Tribute To Graffiti: 50 Beautiful Graffiti Artworks. Advertisement Street culture and graffiti are well-known for being provocative, appealing, bold and uncompromising. 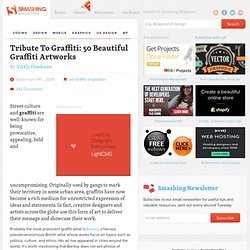 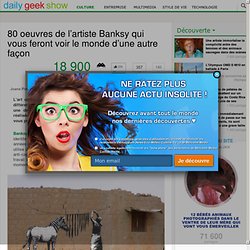 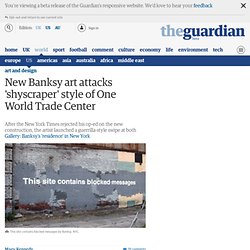 Well no, disasters are interesting" – and a sideswipe at the New York Times for refusing to print his view. During a month as the city's unofficial artist in residence, Banksy has been teasing his fans and tormenting the authorities with a daily revelation on his website of his latest gift to the city. His latest shows a wall stencilled with the words "this site contains blocked messages", over a piece mocked up in the New York Times's distinctive typeface, headed "The biggest eyesore in New York is not the graffiti, argues Banksy, it's under construction at ground zero. " He explains: "Today's piece was going to be an op-ed column in the New York Times. But they declined to publish what I supplied. "One World Trade Center is a non-event. Banksy Reveals 9/11 Tribute Piece In New York City. Banksy continues his month long, plein air exhibition throughout the city of New York with an image all New Yorkers hold close to their hearts. 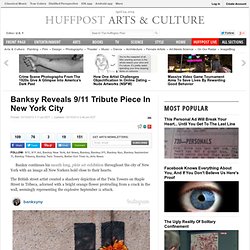 The British street artist created a shadowy depiction of the Twin Towers on Staple Street in Tribeca, adorned with a bright orange flower protruding from a crack in the wall, seemingly representing the explosive September 11 attack. Thus far the reactions to the the 9/11 homage have been mixed. Commenters on Banksy's Instagram have left statements like "No words" and "Brilliant and poetic. " Yet the artwork has left critics like Hyperallergic's Hrag Vartanian unimpressed: "I’m still surprised at how cliché this particular piece seems.

" According to Gothamist, another September 11 tribute has also popped up in Brooklyn Heights, sans the flower, but Banksy has yet to confirm the work on his Instagram account. What do you think, readers? Loading Slideshow. Banksy. If anyone is hesitant about the wild world of graffiti, I would first advise them to check out Banksy. 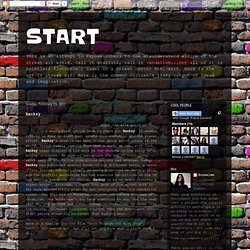 It seemed fitting to base my first post around this anonymous British street artist. Banksy's artwork has been strewn about major cities of the world, though rarely lasting more than a week, or two, with luck. Banksy began displaying his work in the streets in the early 90's, mostly in London. He grew to appreciate the art of stenciling, which many of his fellow underground artists had adopted. Today, Banksy has published several books of his different works, a movie ("Exit Through the Gift Shop") recently premiered in January 2010, and the graffiti mastermind has had numerous exhibitions in the UK and America since the millennium.

Here is a trailer for the film "Exit Through the Gift Shop". Banksy Sells Original Artworks for $60 a Piece in Central Park. Street artist Banksy set up a stall in New York's Central Park Saturday, selling his original pieces — worth tens of thousands of dollars each — for $60. 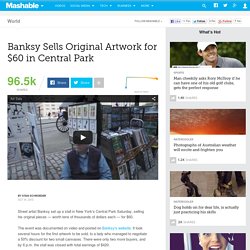 The event was documented on video and posted on Banksy's website. It took several hours for the first artwork to be sold, to a lady who managed to negotiate a 50% discount for two small canvases. There were only two more buyers, and by 6 p.m. the stall was closed with total earnings of $420. Banksy sells work for $60 in Central Park, New York – video. Banksy pays $50K for guarded art space. Bansky’s gone fancy. 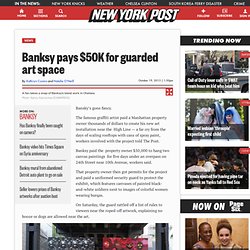 The famous graffiti artist paid a Manhattan property owner thousands of dollars to create his new art installation near the High Line — a far cry from the days of scaling rooftops with cans of spray paint, workers involved with the project told The Post. Banksy paid the property owner $50,000 to hang two canvas paintings for five days under an overpass on 24th Street near 10th Avenue, workers said. That property owner then got permits for the project and paid a uniformed security guard to protect the exhibit, which features canvases of painted black-and-white soldiers next to images of colorful women wearing burqas.

On Saturday, the guard rattled off a list of rules to viewers near the roped-off artwork, explaining no booze or dogs are allowed near the art. “This is a private exhibit. “You guys come in small groups . Roughly 80 fans had gathered outside the exhibit on Saturday morning. Banksy pays $50K for guarded art space. Banksy hits New York City, but the city hits back. 20inShare Jump To Close Acclaimed street artist Banksy has crossed the pond from his native UK, and is now leaving his marks all around New York City. 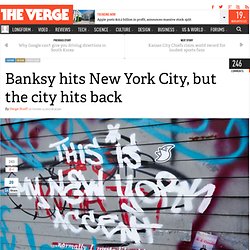 Since October 1st, he's created upwards of 10 pieces as part of his monthlong "residency" (to borrow a term from the professional art world), titled "Better Out Than In. " Banksy's playful work often offers social or political commentary, and he hasn't limited himself to sidewalks and walls in New York — he's already created two mobile pieces on trucks. Banksy's work by its very nature is ephemeral — property owners often paint over it, or opportunistic looters extract it from the streets and sell it for vast sums, sometimes even chiseling it out of exterior walls.

Banksy art in New York painted over after one day. We’ve got a question for Banksy. Every day, New Yorkers get another surprise from the elusive street artist Bansky. 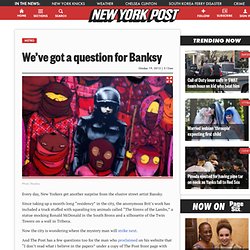 Banksy captivates New York with guerrilla graffiti art blitz. Famously jaded New Yorkers are getting swept up in the hype over Banksy, the renegade graffiti artist who is leaving his mark across the city this month. Known for his anti-authoritarian black-and-white stencilled images, which have sold at auction for upwards of $2m (£1.2m), the British street artist is treating New Yorkers to a daily dose of spray-painted art – while eluding the police and incurring the wrath of Mayor Michael Bloomberg. "Graffiti does ruin people's property," Bloomberg said in a press conference on Wednesday. Reactions from other New Yorkers to the pieces – which appear overnight, usually on side streets in Lower Manhattan and Brooklyn – have ranged from the defacing of images to offers of huge sums for walls Banksy has painted.

"Somebody offered me a million dollars if I took down the bricks," said Jose Goya, the manager of a Williamsburg, Brooklyn, building that Banksy spray-painted on Wednesday night.