Street Artist Depicts Social Media Addiction Through Satirical Graffiti. Vancouver street artist iHeart has stenciled a series of street artworks in and around his urban surroundings. 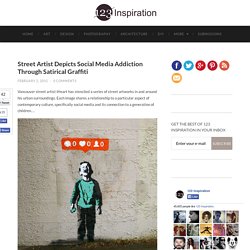 Each image shares a relationship to a particular aspect of contemporary culture, specifically social media and its connection to a generation of children… iHeart | via designboom. Creative Street Art by OakOak. 150 fake security cameras by SpY. After their last wall project Grow, Spanish artist SpY created this piece called ‘Cameras’ in Madrid. 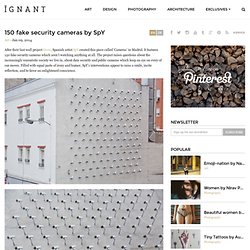 It features 150 fake security cameras which aren’t watching anything at all. The project raises questions about the increasingly voyeuristic society we live in, about data security and public cameras which keep an eye on every of our moves. Filled with equal parts of irony and humor, SpY’s interventions appear to raise a smile, incite reflection, and to favor an enlightened conscience. All images © SpY. iGNANT. Ian Stevenson’s work is somewhat different to your average street artist or illustrator. 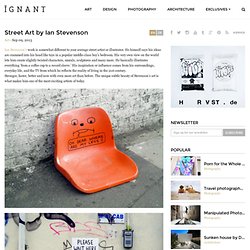 He himself says his ideas are crammed into his head like toys in a popular middle-class boy’s bedroom. His very own view on the world lets him create slightly twisted characters, murals, sculptures and many more. He basically illustrates everything ‘from a coffee cup to a record sleeve.’ His inspiration or influence comes from his surroundings, everyday life, and the TV from which he reflects the reality of living in the 21st century. Stronger, faster, better and now with even more art than before. All images © Ian Stevenson. Street Artist Roadsworth Turns the Streets of Montreal into into Giant Canvas. 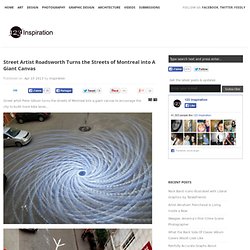 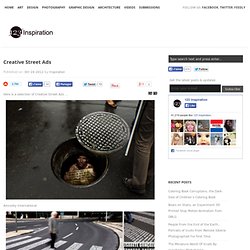 (Advertising Agency: GREY, Melbourne, Australia) We declare the world as our canvas106 of the most beloved Street Art Photos - Year 2010. More info. 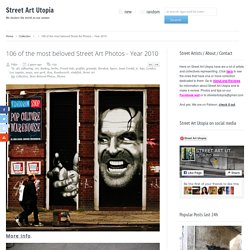 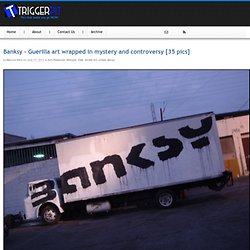 He has become an internationally known as a subversive graffiti artist – yet manages to maintain a secret identity. However, many newspapers assert that his real name is Robert or Robin Banks. He is a counter-cultural prankster, but has art in major cosmopolitan galleries around the globe. He has dozens of celebrity collectors including Brad Pitt, Angelina Jolie and Christina Aguilera. 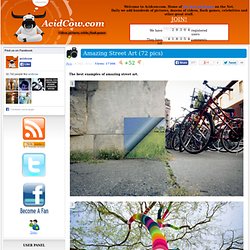 Do you like it? It is just one of the thousands of posts that we have on the Acidcow.com. Please visit our main page to see other great pictures and videos! Banksy. Banksy. I'm afraid we like that destacados Ryue Nishizawa Sou Fujimoto Alison And Peter Smithson aires mateus 2b architectes mgm federico soriano ábalos + sentkiewicz. Banksy tags LA. As the 2011 Oscar ceremony approaches, speculation has been rife about whether anonymous British street artist Banksy will make an appearance. 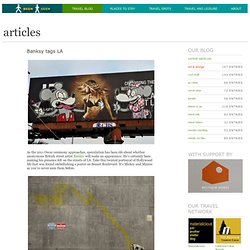 He's certainly been making his presence felt on the streets of LA. Take this twisted portrayal of Hollywood life that was found embellishing a poster on Sunset Boulevard. It's Mickey and Minnie as you've never seen them before. Mickey and Minnie were taken down pretty quickly (probably to sell for a small fortune). But four other pieces popped up in other locations: a peeing dog; a boy with a machine gun, loaded with crayons; Charlie Brown turned pyromaniac; and a commentary on an elephant-shaped metal tank. The reason for all this furore is that Banksy made a documentary about street artists called Exit Through the Gift Shop, and it snagged a Oscar nod. The Oscar nomination isn't a big problem, unless you're a highly successful graffiti artist who travels incognito, often sporting a monkey mask. To respect the night and respect the honour.' - STREET ART UTOPIA. STREET ART UTOPIA - We declare the world as our canvas. 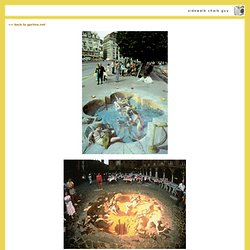