In 1840 he worked in Beuchanaland (now Botswana) but was unable to reach South Africa because of the Boer war. During his explorations in Africa between 1852-56 his mission was, to open trade routes whilst gathering useful information about the lagely unknown continent. David Livingstone. David Livingstone (19 March 1813 – 1 May 1873) was a Scottish Congregationalist pioneer medical missionary with the London Missionary Society and an explorer in Africa. 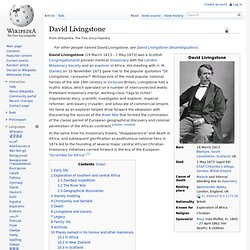 His meeting with H. M. Stanley on 10 November 1871 gave rise to the popular quotation "Dr. Livingstone, I presume? " Perhaps one of the most popular national heroes of the late 19th century in Victorian Britain, Livingstone had a mythic status, which operated on a number of interconnected levels: Protestant missionary martyr, working-class "rags to riches" inspirational story, scientific investigator and explorer, imperial reformer, anti-slavery crusader, and advocate of commercial empire. Scott Monument. The Scott Monument The Scott Monument is a Victorian Gothic monument to Scottish author Sir Walter Scott. 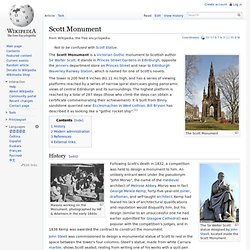 It stands in Princes Street Gardens in Edinburgh, opposite the Jenners department store on Princes Street and near to Edinburgh Waverley Railway Station, which is named for one of Scott's novels. The tower is 200 feet 6 inches (61.11 m) high, and has a series of viewing platforms reached by a series of narrow spiral staircases giving panoramic views of central Edinburgh and its surroundings. The highest platform is reached by a total of 287 steps (those who climb the steps can obtain a certificate commemorating their achievement).

It is built from Binny sandstone quarried near Ecclesmachan in West Lothian. History[edit] Scott Monument on AboutBritain.com. Following the death of Sir Walter Scott on 21st september 1832 there was a widespread feeling in Edinburgh that a monument should be erected to his memory. 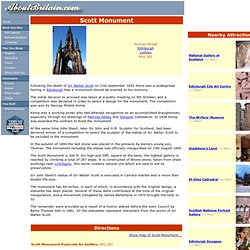 The initial decision to proceed was taken at a public meeting on 5th October, and a competition was declared in order to select a design for the monument. The competition was won by George Miekle Kemp. Kemp was a working joiner who had attained recognition as an accomplished draughtsman, especially through his drawings of Melrose Abbey and Glasgow Cathederal. In 1838 Kemp was awarded the contract to build the monument. At the same time John Steell, later Sir John and H.M. Adam Black. Adam Black's grave in Warriston Cemetery Adam Black FRSE (10 February 1784 – 24 January 1874) was a Scottish publisher and politician. 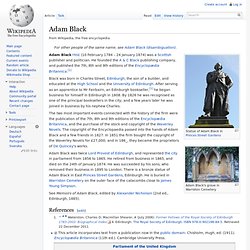 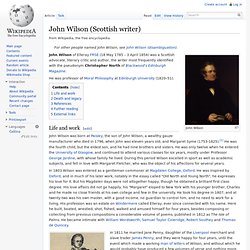 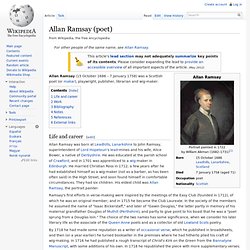 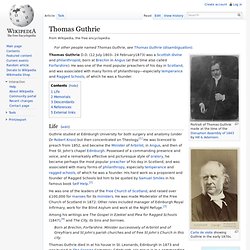 He was one of the most popular preachers of his day in Scotland, and was associated with many forms of philanthropy—especially temperance and Ragged Schools, of which he was a founder. Life[edit] Among his writings are The Gospel in Ezekiel and Plea for Ragged Schools (1847),[4] and The City, its Sins and Sorrows. Born at Brechin, Forfarshire. Thomas Guthrie died in at his house in St. His wife, Anne Burns (1810-1899) daughter of Rev James Burns of Brechin, is buried with him. Memorials[edit] File:Thomas Guthrie.jpg. James Young Simpson.

Sir James Young Simpson, 1st Baronet (7 June 1811 – 6 May 1870) was a Scottish obstetrician and an important figure in the history of medicine. 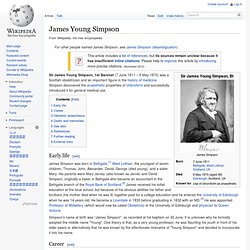 Simpson discovered the anaesthetic properties of chloroform and successfully introduced it for general medical use. Early life[edit] File:James Young Simpson statue.jpg. File:Princes St Wellington.jpg. STATUE- DUKE OF WELLINGTON. Arthur Wellesley, 1st Duke of Wellington. Wellesley rose to prominence as a general during the Peninsular campaign of the Napoleonic Wars, and was promoted to the rank of field marshal after leading the allied forces to victory against the French at the Battle of Vitoria in 1813. 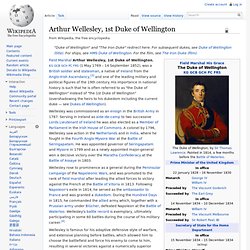 Following Napoleon's exile in 1814, he served as the ambassador to France and was granted a dukedom. During the Hundred Days in 1815, he commanded the allied army which, together with a Prussian army under Blücher, defeated Napoleon at the Battle of Waterloo. Wellesley's battle record is exemplary, ultimately participating in some 60 battles during the course of his military career.[4] Wellesley is famous for his adaptive defensive style of warfare, and extensive planning before battles, which allowed him to choose the battlefield and force his enemy to come to him, resulting in several victories against a numerically superior force whilst minimising his own losses. Early life and education He went to the diocesan school in Trim when at Dangan, Mr. Overview of Ross Fountain. File:Bum Chien de San Diego.JPG.