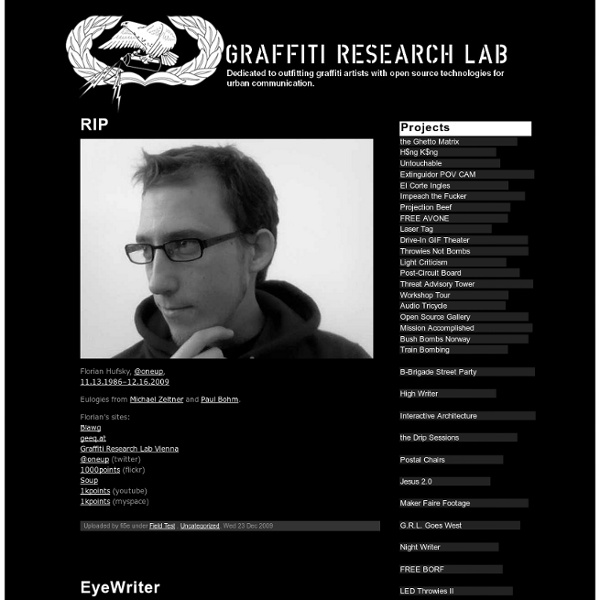 The United States of America is going out of business! But here at the U.S. Department of Homeland Graffiti, we want to turn this moment of national embarrassment and hard times into real savings for you and your family. From June 4th through the 28th, the U.S.D.H.G and the Graffiti Research Lab are liquidating all confiscated, high-tech graffiti artifacts and tools, expunged evidence, court exhibits, redacted documents and office furnishings, priced to sell. So grab a handful of Euros or Mao Bucks (U.S. currency still accepted while supplies last) and head on down to Gallery Anno Domini located between U.S. Routes 101 and 280 in Silicon Valley, California.

Brooklyn Street Art Home Posted on April 7, 2014 “After photographing in the mosh pits for awhile I began to get familiar with patterns in the music. Eventually it got to the point where I could sense the moment coming when things would really cut loose and go berserk,” says painter Dan Witz about his process and method for catching the moment when the roiling mass of hardcore music fans hit the perfect state of frenzy. “NY Hardcore Paintings”, opening this past Saturday night and on view currently at The Jonathan Levine gallery in Chelsea, presents Witz with his new body of convulsing bodies and to say they are a revelation is only part of the story. When we saw his first mosh pit paintings a few years ago we were struck by the raw thrilling chaotic energy and calculated abandon in them – and reminded of many such nights in the 80s and 90s in lower Manhattan when we also joined in the fray. Dan Witz “NY Hardcore” Jonathan LeVine Gallery (Photo © Jaime Rojo)

World Art Treasures Home 100,000 Pictures Europe Austria Czech Republic England Guilt - roots and liberation In his thought-provoking essay The Happiness Conspiracy (NI 391), John F Schumaker described the damaging psychological and social effects of a society single-mindedly fixated on the pursuit of personal happiness above all other concerns. ‘No-one is less able to sustain happiness than someone obsessed with feeling only happiness,’ he observed. By chance, Schumaker’s essay appeared in the NI special issue on carbon offsets (CO²nned), in which I alluded to guilt as one of the possible motivating factors behind people’s desire to ‘neutralize’ their ‘carbon footprints’. The implication was that the drive to offset was partially fuelled by people’s guilt feelings about their individual environmental impacts and/or lifestyle. This seemed to chime with Schumaker’s characterization of ‘happichondriacs’ obsessed with personal satisfaction. Thankfully, offsets have had a lot of bad press since that magazine came out, being criticized as a voluntary ‘guilt tax’ or a ‘modern-day indulgence’.

Mark Jenkins // Street Installations Besançon Rome Rio de Janeiro Tudela London Dublin - STREET ART UTOPIA More info. Let us begin with this words that come as a response to the photo above: “There´s tools and colours for all of us, to lend from nature to make the world more understandable and beautiful”. 1# Click on a photo and you make it bigger and can post a comment on it. 2# Make sure that you read the story in the end! 3# Feel free to reblog this, only remember to link back to this post. More info. Margo Kingston Margo Kingston (born 1959) is an Australian journalist, author, and commentator. She is best known for her work at The Sydney Morning Herald and her weblog, Webdiary. Since 2012, Kingston has been a citizen journalist, reporting and commenting on Australian politics via Twitter and her own Web site.

Street Artist Interview - Ibie Artist name: Fat IbieCity of Birth: BarcelonaCity of Choice: MexicaliHow many years have you been painting: En el colegio me llamaban el rallajero, nuncan entendieron mis dibujitos y me ponian insuficiente en dibujo y plástica. Espero empezar a pintar algún día.Website: www.rrarmy.com & www.fotolog.net/ibie Likes: Regreso al futuro, Star wars y Mallrats NOTCOT.ORG no logo Published at The Intercept Now that it seems virtually certain that Donald Trump will withdraw the United States from the Paris climate accord, and the climate movement is quite rightly mobilizing in the face of this latest dystopian lurch, it’s time to get real about something: Pretty much everything that is weak, disappointing, and inadequate about that deal is the result of U.S. lobbying since 2009. The fact that the agreement only commits governments to keeping warming below an increase of 2 degrees, rather than a much safer firm target of 1.5 degrees, was lobbied for and won by the United States.

20 Examples of Graffiti & Street Art-Europe #1 In this post, the first of a series, we show you 20 top street art and graffiti artworks around the world. Today we start with Europe – next post: South America! > Asia > South America > North America Anita Roddick Dame Anita Roddick, DBE (23 October 1942 – 10 September 2007) was a British-born international businesswoman, human rights activist and environmental campaigner, best known as the founder of The Body Shop, a cosmetics company producing and retailing natural beauty products that shaped ethical consumerism.[1][2] The company was one of the first to prohibit the use of ingredients tested on animals and one of the first to promote fair trade with third world countries. Roddick was involved in activism and campaigning for environmental and social issues, including involvement with Greenpeace and The Big Issue. In 1990, Roddick founded Children On The Edge, a charitable organisation which helps disadvantaged children in eastern Europe and Asia.[3] Honours[edit] In 2003, Queen Elizabeth II appointed Roddick a Dame Commander of the Order of the British Empire. In 2004, Roddick was diagnosed with liver cirrhosis due to long-standing hepatitis C.

106 of the most beloved Street Art Photos - Year 2010 More info. More info. More Banksy on Street Art Utopia. More info. LDN. London Street Art, documented. There are many forms of diverse Street Art around London. Here is a small selection of some exemplary work found around the capital. Street Artists A-Z LDNGraffiti has had an overhaul and painstakingly searched the database to create a set of 'A-Z' listings of Street Artists found in and around London... Banksy vs Team Robbo - Updated: 23/02/2014 On 19/12/2009 Street Artist Banksy adapted a piece of graffiti painted in 1985 by London Graffiti Pioneer Robbo. Swings: Los Angeles Jeff installed swings in San Francisco, in the Marshall Islands, Panama and across Los Angeles, thanks to a grant from The Awesome Foundation. It’s a universal message. An appeal to celebrate the passions of our youth, to give in to simplistic urges, but mostly, to remind people of the difference a smile can make in their day and the infectious effect that smile has on those they encounter. Visit swingsetting.org to be a part of ther next swings project.