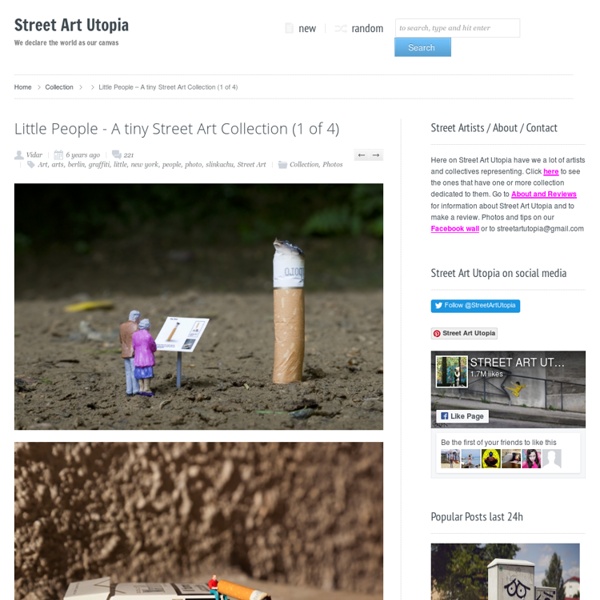 Followers, artists and photographers have for years been asking us if we're going to print a book. The last two years, our response have been that we will do it when we have 1 million followers on Facebook: We are ready We have close to 6 years of daily sharing of street art and contact with artists and photographers. This book has all the potential to become a classic. Time to order your book To do the book as big, thick and colourful as possible we ask for prepaid orders! This is not about donations or "perks" it is about paying for your book(s) now and get it sometime 2016. You can make your order for a book here (shipping included):

Actors in Character - Now That is Acting! Feb 21, 2011 / Category : Movies / 18 Comments There's no denying the fact that most of us have pretended to be actors. Photographer Howard Schatz, from Vanity Fair, took this idea one step further, place actors in a series of roles and dramatic situations to reveal the essence of their characters. Left: You're a priest in a hardscrabble factory-town parish, listening to your brother's son confess that he has killed a man. Center: You're a gangsta rapper being informed by a haughty bouncer that you are not on the list. Right: You're a six-year-old who has skinned his knee in the playground, waiting to cry until your mom gets off her cell phone.

Before I Die & Candy Chang What matters most to you Interactive public art project that invites people to share their personal aspirations in public. After losing someone she loved and falling into depression, Chang created this experiment on an abandoned house in her neighborhood to create an anonymous place to help restore perspective and share intimately with her neighbors. The project gained global attention and thanks to passionate people around the world, over 1000 Before I Die walls have now been created in over 70 countries, including Kazakhstan, Iraq, Haiti, China, Ukraine, Portugal, Japan, Denmark, Argentina, and South Africa. The walls are an honest mess of the longing, pain, joy, insecurity, gratitude, fear, and wonder you find in every community, and they reimagine public spaces that nurture honesty, vulnerability, trust and understanding.

The (Literal) ‘Street Art’ of Pedestrian Crosswalks Literal Street Art Transforms Pedestrian Crosswalks Article by Urbanist, filed under Street Art & Graffiti in the Art category. There is a lot of commercial emphasis on the safety of vehicle designs, but did you know that 25% of auto accidents involve pedestrians? While the purpose of these crossings is to assist people (or in some cases animals) wishing to cross a road, their utilitarianism hasn’t not stopped people from creative experimentation in the form of quite literal pedestrian street art. The most famous of these works come, unsurprisingly, from Peter Gibson, often referred to as Canada’s answer to Britain’s Banksy. 36 Pictures That Look Photoshopped – But Are Not The power of Photoshop is amazing, but still it doesn’t beat the power of imagination. Although many photos taken by professional photographers and enhanced in Photoshop can be absolutely stunning, the photos taken wisely and in a creative manner are even more impressive. Today’s showcase is dedicated to such photos, the ones that make people skeptical about not being manipulated and still they are genuine and impressive. They can be really inspiring and a pride to every photographer’s portofolio, no matter if they are funny, dramatic or just miracles of nature. Salar de Uyuni

Synesthesia Music EmailEmail Synesthesia actually lets you paint with the colors of the wind, if it’s loud enough. This rare neurological phenomenon also enables Melissa McCracken to paint music. Synesthesia means that some of your stimuli are joined in unusual combinations. Shooting Strangers in Orchard Road When I’m out on the streets, I often encounter faces that make me look twice; faces that stand out in the crowd without trying; faces that are out of the ordinary. They range from the exquisitely beautiful to the strangely wonderful. I started to approach these strangers for permission to take a photo of them. Some said no, but most said yes. After taking their portrait, I’d say ‘thank you’ and walk on along. I didn’t ask for their names, or where they came from, or what they do, because I wanted the viewers to see them how I saw them: as beautiful strangers.

Jinns in Islamic Art – Islam and Science Fiction Jinns are intelligent beings in Islamic belief system which have free will just like human beings. Unlike humans however they are made of smokeless fire. Jinns are also supposed to have different religions just like humans e.g., Christianity, Islam, Judaism, Hinduism etc and even Atheism.