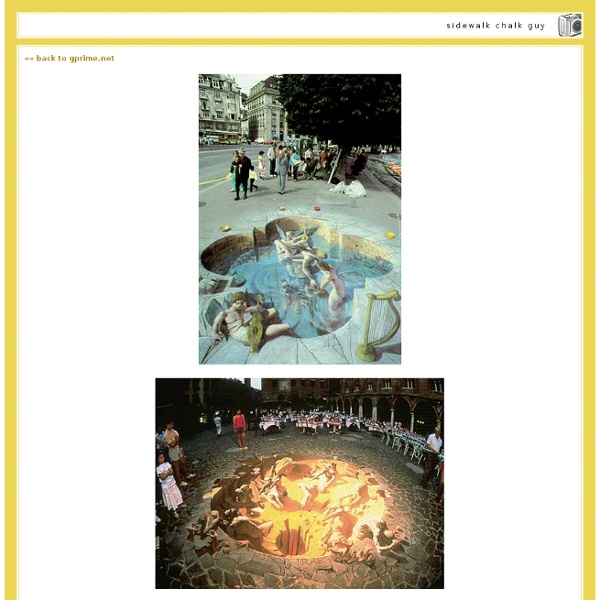 sidewalk chalk guy «« back to gprime.net all material copyrighted by its original creator |

The 15 Most Beautiful Flowers In The World Canna Cannas not only feature pretty blossoms, but also beautiful leaves (often likened to that of the banana plant) that come in a variety of stunning colors. Popularized in Victorian times, Cannas are popular garden plants. Cherry Blossom The unofficial flower of Japan, the spectacular display of blossoms that arrive in the spring are celebrated by festivals both in Japan and the U.S. Everything but the Paper Cut: Eye-popping Ways Artists Use Paper In the year since the Museum of Art and Design reopened in its new digs on Columbus Circle, they've been delivering consistently compelling shows--from punk-rock lace to radical knitting experiments. The newest, "Slash: Paper Under the Knife", opened last weekend and runs through April 4, 2010. The focus is paper--and the way contemporary artists have used paper itself as a medium, whether by cutting, tearing, burning, or shredding. In all, the show features 50 artists and a dozen installations made just for the show, including Andreas Kocks's Paperwork #701G (in the Beginning), seen above. Here's a sampling of the other works on display:

Book Of Art January 18th, 2011 Books of Art by Isaac Salazar, a simple idea well executed. found at ffffound Beautiful Watercolor Landscapes (12 pieces) Z.L. Feng grew up in Shanghai and began painting at the young age of seven. After experimenting with all kinds of different mediums, he finally settled on a favorite - watercolor. The artist always revered the medium because of its level of difficulty. “With watercolor you cannot cover your mistakes, so you must know what you are doing,” he says. One of Feng's favorite places to find inspiration is in the countryside of Virginia's New River Valley.

The artwork of Joshua Petker Joshua Petker was born in Los Angeles, CA in 1979 and received a BA in Western History from The Evergreen State College in Olympia, Washington. While pursuing a degree in History he maintained a growing interest in the arts that developed out of a fascination with graffiti which Petker started creating at the age of 15. After studying abroad in 2001 at the Lorenzo de'Medici Institute of Florence, Joshua decided to pursue a career as a fine artist upon completion of his studies back in the U.S.A. Van Gogh, Neal Cassady, Cy Twombly, Mark Rothko, J.M.W. Turner, and Andy Warhol are some of the artist’s inspirations. 106 of the most beloved Street Art Photos - Year 2010 More info. More info. More Banksy on Street Art Utopia. More info. More 3D on Street Art Utopia. More of this on streetartutopia.com.

3D Paintings on Panes of Glass Using multiple layers of clear glass, Canada based David Spriggs and Chinese born Xia Xiaowan, transform flat artwork into 3D sculptures. Viewers are treated to different shifting perspectives of the works based on where they stand in the art space. Spriggs work revolves around powerful explosive imagery, often resembling storms, cosmic blasts or firework like explosions. Xiawan’s “spatial paintings,” which often feature distorted figures, are drawn individually using colored pencil on tinted glass. Only when these pieces are combined on their floor racks do the images create the whole hologram like effect. Lots of Jokes - Did You Know? Q. Why do men's clothes have buttons on the right while women's clothes have buttons on the left? A.

The World's Smallest and Deadliest Animals Smallest And Deadliest Animals: Poison Dart Frog The sprightly and brightly colored frog may look enchanting, but it can produce enough poison to kill 10 humans. Thriving in humid, tropical environments of Central and Latin America, the poison dart frog oozes black slime from its back, which is actually a neurotoxin used to ward off predators. Australian Box Jellyfish

Calvin and Hobbes Snow Art Gallery Snow Art in ColourSend Calvin and Hobbes Postcards Online! Calvin and Hobbes Fan Page Email: mailkate20@yahoo.com Dancers among us New York photographer Jordan Matter’s “Dancers Among Us” project features performers from the Paul Taylor Dance Company performing guerrilla dance moves in iconic Manhattan locations Michelle Fleet, NY Public Library (JORDAN MATTER PHOTOGRAPHY / BARCROFT USA) By getting the dancers to pull off their difficult poses surrounded by normal people in everyday situations, Jordan hopes to highlight the skill of talented individuals who walk among us everyday. “I was struck by the skill of the dancers of Paul Taylor and through a friend managed to get guys and girls there to volunteer their time for this project,” Jordan said.