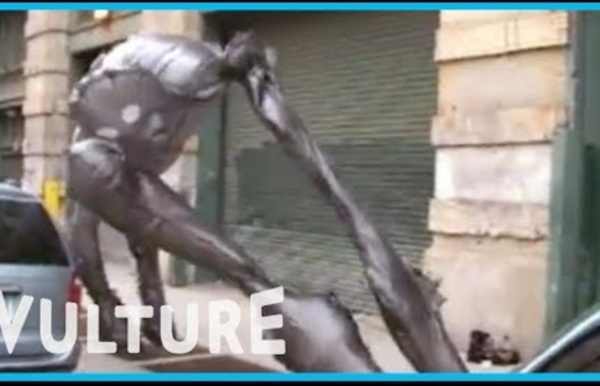 Street Art In the first commission to use the building’s iconic river façade, and the first major public museum display of street art in London, Tate Modern presents the work of six internationally acclaimed artists whose work is intricately linked to the urban environment: Blu from Bologna, Italy; the artist collective Faile from New York, USA; JR from Paris, France; Nunca and Os Gemeos, both from São Paulo, Brazil and Sixeart from Barcelona, Spain. You can also take the Street Art Walking Tour: an urban tour of site-specific art from a group of five Madrid-based street artists: 3TTMan, Spok, Nano 4814, El Tono and Nuria – a map will be available in the gallery. Various events will take place during the exhibition, including an interactive evening with experimental New York artists Graffiti Research Lab, refacing Tate Modern with graffiti light projections.

vintage + modern design for kids and the home Eri posted a DIY tuto­r­ial for this amaz­ing bird wings cos­tume on her blog, Llevo el Invierno. She pro­vides a free pat­tern that you can down­load as well, sized for chil­dren ages 18 to 36 months. Using the tem­plate she pro­vides, you can assem­ble the wings by either glu­ing or sewing the fabric. Amazing Steampunk Sculptures Retro and Gothic and Steampunk are the right words to describe his art style. It is a clash between the peaceful nature and the raw material. French artist Pierre Matter is showing the world how beautiful copper can be by creating extraordinary sculptures out of it. Mixing it with resin, , bronze, rubber, aluminium and other materials his creations are simply fantastic.

Great street art of 2012 by Anorak | 19th, November 2012 GREAT Street art: Spotter: StreetUtopia Crazy Illustrations By Chow Hon Lam Chow Hon Lam is a t-shirt designer and a humorous illustrator from Malaysia. He has been completed this crazy project called Flying Mouse 365, which is create 1 design per day. I hope his illustrations can bring some smile and entertainment to the world. About the author Street Art Current Issue On sale now at newsstands or on screen May 2014 - Issue #160 All year long, Juxtapoz is celebrating its 20th Anniversary by showcasing the pivotal figures in contemporary art over the past two decades. Some artists are blue chip, some are underground heroes, others are behind-the-scenes legends. This month, we honor one of the great artists from Los Angeles during our existence, Alexis Ross, who has been monumental in various landmark exhibitions including "Street Market" at Art In the Streets.

Bespoken Art &45; Art Made From Your Voice - Atomik - We Find The Awesome For You - StumbleUpon By James on October 19th, 2011 at 2:17 pm Art, Picture Pages, Products, Technology With Bespoken Art, you can immortalize any recorded sound on a frame-able, hang-able piece of customized canvas. From wedding vows to dog barks to your favorite song, Bespoken Art does it all. 20 awesome examples of street art If you still need a proof that art can be found anywhere, those awesome examples of great street art should convince you. 6 Terrifying Ways Crows Are Way Smarter Than You Think Mankind has a long and checkered past with crows and ravens: They have been feared as symbols of death, because they're all black and scary, revered as creators of the world because, well, it was either them or the seagulls, and worshiped as trickster gods, because of their baffling intelligence. Intelligent enough, in fact, for us to start worrying ... #6. They Can Remember Your Face

The Art of OaKoAk Some of the best street art has humor built into it. In the case of French street artist, OaKoAk, they take what the city gives to them and creates a witty street piece. Who hasn't wanted to turn a tile doorstep into a piano, or a sewer cover into a Viking's shield? Blake Fall-Conroy Sculpture Minimum Wage Machine (Work in Progress) (2008-2010) Custom electronics, change sorter, wood, plexiglas, motor, misc. hardware, pennies. (approx. 15 x 19 x 72 inches) The minimum wage machine allows anybody to work for minimum wage. Turning the crank will yield one penny every 4.97 seconds, for $7.25 an hour, or NY state minimum wage.

Steampunk Insects Created from Bullets Tom Hardwidge’s Arthrobots are robotic insects — steampunk creations made from upcycled gears, nuts, bolts… and bullets! All images courtesy of Tom Hardwidge . English artist Tom Hardwidge has an unusual specialty: creating steampunk insects from old, inactive ammunition and pieces of clockwork. Each piece is so delicately and masterfully crafted that it is sometimes hard to even imagine what the recycled components might once have been, or to decipher where one part ends and where the next begins. Even harder to believe is that Hardwidge creates steampunk insects only as a hobby; he is a digital designer by day and gets time to work as a creative insect maker only at night.

The Tire Art of Wim Delvoye For his series titled "Pneu", Belgian artist Wim Delvoye created a series of decorative objects by hand-carving intricate patterns and floral motifs on used car tires. Through his manipulation of found objects, Delvoye transforms things that seem useful in everyday life into sculptural pieces that carry a different value from their original intended purpose. Delvoye calls his own approach to art ‘glocal’, referring to ‘local’ and ‘global’, which is his own ironical way of describing art.