London's street art neighbourhoods: Turnpike Lane. Over the past quarter of a century, street art has become part of London's image. 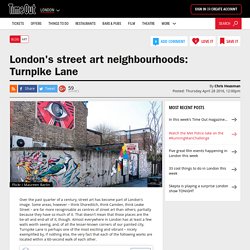 Some areas, however – think Shoreditch, think Camden, think Leake Street – are far more recognisable as centres of street art than others; partially because they have so much of it. That doesn't mean that those places are the be-all and end-all of it, though. A Guide To Street Artists in Florence - Girl in Florence. 487 Shares Lately it has felt like the streets of Florence have become more than just a Renaissance background, street art has been popping up more than ever, and everywhere I go I see something new. 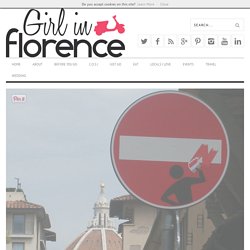 Something odd, something interesting, and I love it all – and it keeps my eyes open to spotting this as I walk around the city. My friends have been getting into it and even the people I work for. I realize that the actual city administration might be a lot less keen on what could be seen as defacing city alleyways, but let’s be honest. It’s get us thinking a little more, plus it makes day-to-day objects like street signs into interesting talking points. Images to GIF Generator. Make custom animated GIFs/slideshows from images. 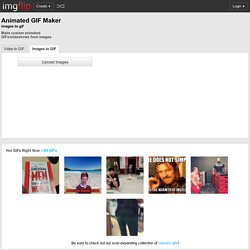 Something not working? Do you have suggestions to make this gif maker better? Send feedback! How do I make a GIF from images? Upload images. See our favourite street art works from City of Colours - which turned Digbeth into a huge open air gallery. More than a hundred street artists, DJs, musicians and dancers helped turn Digbeth into a huge outdoor art gallery during the City of Colours festival. 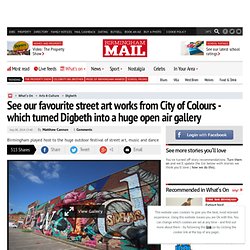 Renowned urban artists including Inkie, Loch Ness and Dale Grimshaw featured as thousands headed to the inaugural two-day event in Birmingham at the weekend (September 6-7). They were among a host of talent which helped transform around 4,000sq ft of wall space, hoardings and disused train carriages into works of art. Festival goers were encouraged to embrace the street art, dance, photography, DJ-ing and printing across venues such as The Custard Factory, Alfie Birds and The Arena. Organisers, Street Art Birmingham, teamed-up with St Basil’s hospice for the festivities to help raise funds and awareness for the charity which supports young people aged 16-25 who are homeless. Sydenham - Global Street Art. New Rolling Fool in Soho - Discovering London. A new Rolling Fool has appeared in Broadwick Street, Soho. 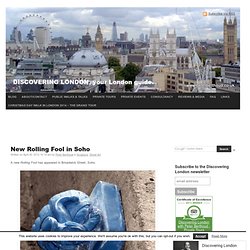 A New Rolling Fool The distinctive jester character is one of a series by street artist Dr Cream. The artist himself alerted me to this new work via a comment on a previous blog post of mine. There are many plastic sculptures in the series, in different colours, sizes and positions. One has recently been nicked from Manette Street but another can still be found in St Anne’s Court. I always include one or two Rolling Fools in my regular tours of The Seven Noses of Soho. Dr Cream has also recently uploaded a new animated film (56 seconds) depicting his creation curling himself into his snail shell at various London locations. 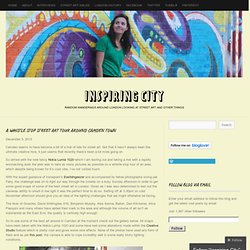 Not that it hasn’t always been the ultimate creative hive, it just seems that recently there’s been a lot more going on. So armed with the new fancy Nokia Lumia 1020 which I am testing out and taking a risk with a rapidly encroaching dusk the plan was to take as many pictures as possible on a whistle stop tour of an area, which despite being known for it’s cool vibe, I’ve not visited much. With the expert guidance of Instagram’s Eastldngeezer and accompanied by fellow photography loving pal Fairy, the challenge was on to fight our way through the crowds on a busy Sunday afternoon in order to get some good snaps of some of the best street art in London. Given as I was also determined to test out the cameras ability to shoot in low light it was the perfect time to do so. New Amy Winehouse street art appears in Camden Town. Bambi’s Amy Winehouse piece on a wall in Bayham Street Artist Jason Howarth working on his Amy mural in Albert Street Published: 12 September, 2013 by FRANKIE GOODWAY TWO new street art pictures of Amy Winehouse have appeared in Camden Town amid plans to mark what would have been the singer’s 30th birthday this weekend. 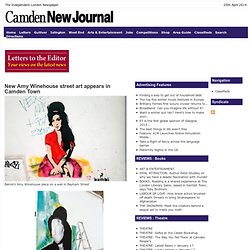 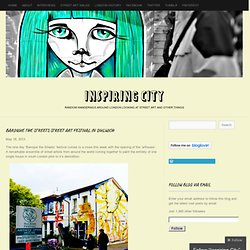 A remarkable ensemble of street artists from around the world coming together to paint the entirety of one single house in south London prior to it’s demolition. The house at 265 lordship lane in Dulwich has been painted inside and out. Baroque the Streets: Dulwich Street Art Fesitval: MadC. As part of the Dulwich Festival this year Baroque the Streets (organised in collaboration with Street Art London) is working with a cherry picked group of internationally renowned street artists. 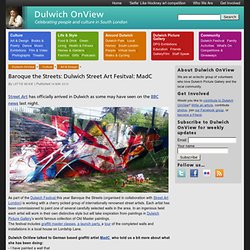 Each artist has been commissioned to paint one of several carefully selected walls in the area. In an ingenious twist each artist will work in their own distinctive style but will take inspiration from paintings in Dulwich Picture Gallery’s world famous collection of Old Master paintings. The festival includes graffiti master classes, a launch party, a tour of the completed walls and installations in a local house on Lordship Lane.

Dulwich OnView talked to German based graffiti artist MadC who told us a bit more about what she has been doing: - I have painted a wall that is inspired by a painting on display at Dulwich Picture Gallery, “Still Life with Flowers” by Van Huysum c.1720. . - I started as a graffiti artist about 15 years ago. Why did you decide to get involved in this project? Baroque the Streets: Dulwich Street Art Festival: Work in Progress. With just under a week to go before Baroque the Streets, preparations are well under way. 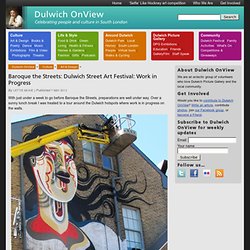 Over a sunny lunch break I was treated to a tour around the Dulwich hotspots where work is in progress on the walls. We swung by the Paxton to be greeted with an almost complete giant mural on one side of its brick façade. Leaning precariously out of a genie was REKA putting the final touches to his design which is inspired by Europa and the Bull by Guido Reni. Taking over much of that side of the Paxton pub this work is striking, but surprisingly unobtrusive. REKA explained that he used a limited palette and took account of the existing colour scheme of the pub in his design.

Driving through a busy East Dulwich we then caught a glimpse of Conor Harrington making the final touches to another huge mural. That night I met some more of them at 265 Lordship Lane which has become an informal base camp for the project. Street artist Stik’s street art in Dulwich – Street Art London. Stik recently collaborated with the Dulwich Picture Gallery to re-create seven old master paintings from the Gallery’s collection around the streets of Dulwich. This project represents a daring collaboration between street artist and England’s first public art gallery.

ROA. The Outdoor Street Art Gallery of Dulwich. The Baroque the Streets art festival of the past two years has certinaly left it’s mark on the streets of leafy Dulwich. Possibly as far removed from a street art haven than you might think, the area has become a must see for quality art. Street artist Stik started it all off in 2012 when he collaborated with Ingrid Beazley from the Dulwich Picture Gallery to recreate old masters on the streets of the area. Now in 2013 the likes of Conor Harrington, ROA, Nunca, Remi Rough and System, Reka One and MadC have joined the party. All this is in addition to the arthouse created by Street Art London which saw a suburban house taken over and every inch of space painted by top drawer artists.