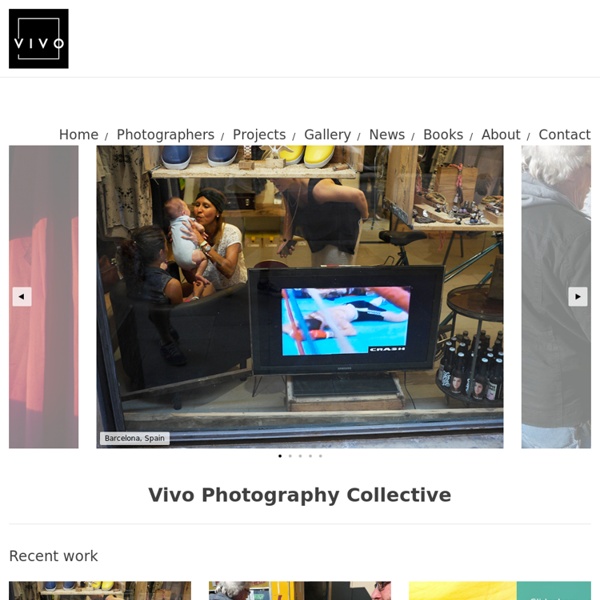 Reality Remade – Regina van der kloet – The Eye of the Beholder Photographer: Regina van der kloet Description: With this project I want to embark on a journey where everything I shoot is determined by what I have shot before it. I will keep my eyes open for reoccurring moments revealing themselves in daily life. Reality remaking itself.

Create an Easy Double Exposure Portrait in Minutes Double exposure is a cool effect that has been around for a long time. In the film camera days, it was accomplished by exposing the negative twice on two different scenes. Now this effect can be easily created and embellished using a few simple tricks in Photoshop. Is Smartphone Journalism The Way Forward? PSFK has partnered with Boehringer Ingelheim to bring you a snapshot of Ten Innovative Ideas each week that are reshaping the health care industry. Continue reading below for the most exciting ideas from the past seven days. Mood-Boosting ‘Headphones’ Send Light Directly To The Brain The VALKEE Bright Light Headset is a light treatment solution for seasonal affective disorder that was designed to be worn like a pair of earbuds, shining light to a user’s brain via their ear canals. Light therapy targets the brain’s photosensitive areas which can cause depression and mood swings when not receiving enough light.

Matt Georges Blog Been in the wild in January to shoot the RHYTHM Winter Campaign. 90% shot on Polaroids!! Whoop Whoop! Here are a few previews before I can show everything in couple months. Street Photography guide from Photo.net "Stare. It is the way to educate your eye, and more. Stare, pry, listen eavesdrop. Die knowing something. The Death of Street Photography (and what you can do to stop it) Lately on the web, there has been a ton of buzz about the phobia that people are having about street photographers. We have been called creepers, pedophiles, and even in some cases, terrorists (as the TSA would like the public to think). Is all this anti-photographer sentiment leading to the death of street photography as we know it? At first I didn’t really think much about the fanaticism that the American public was having with street photography. Sure, there has been several articles on the web that denounced street photographers, but none of those articles really hit any of the mainstream sites. However I noticed, it is not only the US that is starting to turn the evil eye towards street photographers, but many other countries in the world as well.

31 SIMPLE TIPS ON HOW TO USE PHOTOSHOP LIKE A PRO - AvantPhoto Want to learn how to use Photoshop like the pros? Here is the ultimate list of wonderful tips. By the time you’re done you’ll be a master at Photoshop! 1. Edit all your pictures at once with Batch Processing. 2. The Most Powerful Photos of the President in 2012 Though we're already four days into 2013, it's hard to not think back on all of the memorable moments in 2012. As an election year, 2012 was especially unforgettable for reelected President Barack Obama. Photographer Pete Souza was there to capture the President, his family, and the White House staff's most poignant moments throughout the year. Brock Davis: Art, Design, Ideas Photograph for The New Republic magazine.Art Direction, Editorial Design, Photography2014 Editorial photo for Men's health magazine.Art Direction, Fine Arts, Photography2014 Some of my favorite iphone photos of 2013Art Direction, Fine Arts, Photography2014 Some of the minimal, 6-second vines I made with my iphone this year.Animation, Directing, Film2013 Personal art made just for fun.Crafts, Culinary Arts, Sculpting2013 Illustration for Kiplinger's MagazineArt Direction, Editorial Design, Illustration2013

What is Street Photography? Over the last few decades the phrase ‘Street Photography’ has come to mean a great deal more than simply making exposures in a public place. Photographers like Robert Frank, Garry Winogrand, Lee Friedlander and Joel Meyerowitz have forced a redefinition of the phrase that has many new implications. Primarily Street Photography is not reportage, it is not a series of images displaying, together, the different facets of a subject or issue. For the Street Photographer there is no specific subject matter and only the issue of ‘life’ in general, he does not leave the house in the morning with an agenda and he doesn’t visualise his photographs in advance of taking them.