The Emerald Tablets of Thoth 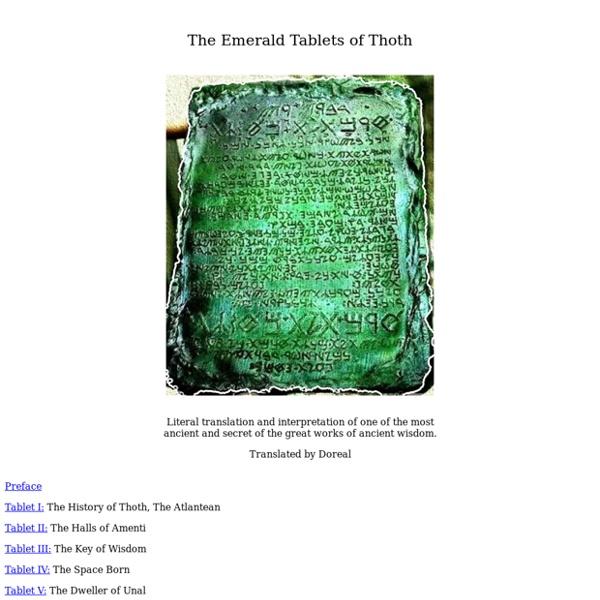 Translated by Doreal Preface Tablet I: The History of Thoth, The Atlantean Tablet II: The Halls of Amenti Tablet III: The Key of Wisdom Tablet IV: The Space Born Tablet V: The Dweller of Unal Tablet VI: The Key of Magic Tablet VII: The Seven Lords Tablet VIII: The Key of Mysteries Tablet IX: The Key of Freedom of Space Tablet X: The Key of Time Tablet XI: The Key to Above and Below Tablet XII: The Law of Cause and Effect and The Key of Prophecy Tablet XIII: The Keys of Life and Death Supplementary Tablet XIV Atlantis Supplementary Tablet XV: Secret of Secrets ShareThis Thoth Thoth's Alter Egos Book of Thoth Sacred Geometry The 12 Pyramids of Thoth Book of Thoth M W Reversed Sacred Jewelry and Emerald Tablet Talismans Masterfully Crafted by the Artist - David Weitzman David's work harnesses the power of spiritual symbols and sacred geometry to bring those wearing them health, happiness, vitality, abundance, and above all - love.

Dropa Stone Discs The Dropa Stone Discs As humanity searches for its extraterrestrial roots, amount the enigmatic objects found along the way are the Drop Stones of Tibet. Who were the Dropa? The Dropa (also known as Dropas, Drok-pa or Dzopa) are, according to certain controversial writers, a race of dwarf-like extraterrestrials who landed near the Chinese-Tibetan border some twelve thousand years ago. Myth, Legend, Folklore, Ghosts Apollo and the Greek Muses Updated July 2010 COMPREHENSIVE SITES ON MYTHOLOGY ***** The Encyclopedia Mythica - SEARCH - Areas - Image Gallery - Genealogy tables - Mythic Heroes Probert Encyclopaedia - Mythology Gods, Heroes, and MythDictionary of Mythology What is Myth? MESOPOTAMIAN MYTHOLOGYThe Assyro-Babylonian Mythology FAQ Sumerian Mythology FAQ Sumerian Mythology Sumerian Gods and Goddesses Sumerian Myths SUMERIAN RELIGION Mythology's Mythinglinks: the Tigris-Euphrates Region of the Ancient Near East Gods, Goddesses, Demons and Monsters of Mesopotamia The Assyro-Babylonian Mythology FAQ More info on Ancient Mesopotamia can be found on my Ancient River Valley Civilizations page.

Adam McLean Adam McLeanResearcher into the ancient art and science of Alchemy. The creator of the alchemy web site, Adam McLean, is a well known authority on and enthusiast for alchemical texts and symbolism, the editor and publisher of over 40 books on alchemical and Hermetic ideas. Based in the UK, he has been writing and researching alchemical and hermetic literature for many years. Between 1978 and 1992 he edited the Hermetic Journal and during those years he also began publishing the Magnum Opus Hermetic Sourceworks, the important series of twenty seven editions of key source texts of the hermetic tradition.

The Annunaki and the 12th Planet Chris Fowler original source | fair use notice Summary: What sets Zecharia Sitchin apart from others who have written books on similar topics is his academic background and the amount of research he did ( 30 years ) before he published his first book, "The 12th Planet", back in 1976. What possibly fills in a big chunk of the puzzle about how the human race came about and how civilisation started can be found in the excellent work of Zecharia sitchin. A lot of people who are interested in ufology are all too familiar with the books by Erich Von Daniken but many are still totally unfamiliar with the work of Zecharia Sitchin in the form of his excellent series of books titled "The Earth Chronicles".

The Mexican Government Reveals Mayan Documents Proving Extraterrestrial Contact The reality of extraterrestrial contact with human civilization is becoming more clear by the month as streams of information about the extraterrestrial presence and past influence hits. While some of us still have our doubts about ET contact, many are starting to realize the truth that has been talked about for centuries. One big story involves the Mexican government who has released documents and images of objects found on the site of Calakmul, Mexico which help prove the reality of ET contact.

ORME Included in the above links to other web pages should be added one to the Halexandria Forums, where in particular the article by Barry Carter should be noted. (7/20/08) The Chemistry and Physics of Monoatomic Elements, describes the characteristics of those elements which have come to be known as the “Precious Metals”. These eight metals include: ruthenium, rhodium, palladium, and silver (known as the “light platinum group”), osmium, iridium, platinum, and gold (known as the “heavy platinum group”). These eight Transition Group elements, can in a monoatomic, superdeformed, high spin, and low energy state, lose their chemical reactivity and metallic nature -- thereby resulting in a state of Superconductivity -- a resonant condition complete with Meissner magnetic field(s), Cooper Pairs, and electrons which have literally changed into light (i.e. photons).

Tommy Chong Reveals Prostate Cancer Diagnosis, Treating with Hemp Oil by Mike Barrett One-half of the German award-winning comedy duo Cheech & Chong, Tommy Chong has recently announced his battle against prostate cancer. While Chong was diagnosed about a month ago with prostate cancer, he was told by his doctor that a ‘slow stage 1′ cancer has been active for a ‘long time’. The 10,000 year-old Sumerian space maps, dictated by ET Homo Sapiens from Planet Nibiru Excerpt from “Anunnaki: legacy of the Gods, techno-savvy ET s from the Planet Nibiru who came for gold, created us from their genome to work the mines, posed as Gods, decided to let us drown, but then decided to breed us to work for them.” Sumerians’ rocket route maps and clay tablets show planets past eye-range. The Sumerians wrote that giant people, whom the Sumerians called “Anunnaki” or Those-Descended-from-the-Sky, said they came from the planet Nibiru 450,000 years ago. The Nibirans were 7-12 foot-tall Homo Sapiens goldminers who came mine Earth’s gold. Clay tablet in the ruins of the Royal Library at Nineva shows how to go through inner solar system. In Andy Lloyd’s scenario, their planet, Nibiru, revolves around Nemesis, Solaris’ binary dark dwarfstar; this, from the perspective of Earth, is as far from Earth as Nibiru goes.

Dispelling Myths About Wicca and Paganism There are many misconceptions out there about Pagans and Paganism as well as Wicca and Wiccans. For some reason all of these words have negative connotations for many and are often associated with evil, particularly by Christians and Christianity. People do not seem to understand what it means to be Wiccan or Pagan. Perhaps by dispelling the myths we can begin to build tolerance and peace between faiths. Aleister Crowley: His Elite Ties and His Legacy The man who revelled in being called “Great Beast 666″ and dubbed by the press as the “Wickedest Man in History” was more than a theatrical occultist: Aleister Crowley is at the heart of one of the most influential movements of the 20th and 21st centuries. He also had ties with some of the world’s most powerful figures, even working with the British Intelligence Agency MI-5. This article describes the life and works of occultist Aleister Crowley and looks at his ties with the world elite which facilitated the propagation of the Thelema. Although he is considered to be the most influential occultist of the 20th century and was recognized by the BBC as the 73rd “greatest Briton of all time”, most people have never heard of Aleister Crowley. The English occultist, mystic and ceremonial magician is incredibly popular in some circles (occultists, artists, celebrities, etc.) but completely unknown to the average person.

Marijuana And Cancer: Scientists Find Cannabis Compound Stops Metastasis In Aggressive Cancers A pair of scientists at California Pacific Medical Center in San Francisco has found that a compound derived from marijuana could stop metastasis in many kinds of aggressive cancer, potentially altering the fatality of the disease forever. "It took us about 20 years of research to figure this out, but we are very excited," said Pierre Desprez, one of the scientists behind the discovery, to The Huffington Post. "We want to get started with trials as soon as possible." The Daily Beast first reported on the finding, which has already undergone both laboratory and animal testing, and is awaiting permission for clinical trials in humans.

Emerald Tablet An imaginative 17th century depiction of the Emerald Tablet from the work of Heinrich Khunrath, 1606. The Emerald Tablet, also known as the Smaragdine Table, or Tabula Smaragdina, is a compact and cryptic piece of Hermetica reputed to contain the secret of the prima materia and its transmutation. It was highly regarded by European alchemists as the foundation of their art and its Hermetic tradition. The original source of the Emerald Tablet is unknown. Although Hermes Trismegistus is the author named in the text, its first known appearance is in a book written in Arabic between the sixth and eighth centuries. Sacred Texts: Legends and Sagas Sacred-texts home Neo-Paganism Classical Mythology Lord of the RingsBuy CD-ROM Buy Books: Legends and Sagas General Northern European Arabia Baltic Basque Celtic Eastern European England Finland France Germany Greece Iceland Italy Persia Portugal Roma (Gypsy) Scandinavia Spain This section of sacred-texts archives the rich literature of Sagas and Legends. These are mostly (but not all) from Northern Europe, and primarily based on legendary events and people from the Middle Ages.