Brain Waves And The Deeper States Of Consciousness 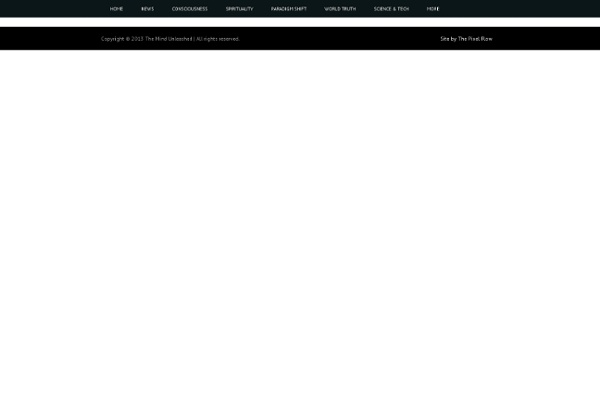 Every part of your body vibrates to its own rhythm. Your brain has a unique set of brain waves. In neuroscience, there are five distinct brain wave frequencies, namely Beta, Alpha, Theta, Delta and the lesser known Gamma. Each frequency, measured in cycles per second (Hz), has its own set of characteristics representing a specific level of brain activity and hence a unique state of consciousness. Beta (12-30Hz): Beta brain waves are associated with normal waking consciousness and a heightened state of alertness, logic and critical reasoning. Alpha (7.5-12Hz): Alpha brain waves are present in deep relaxation with the eyes usually closed and while day-dreaming. The following chart shows the EEG (Electroencephalography) graphs of the four major levels of brain activity. The Alpha-Theta border, from 7 to 8Hz, is the optimal range for visualization, mind programming and using the creative power of your mind. Credits: Tania Kotsos of www.mind-your-reality.com Image: Credits Related:  Nuerobiology

10 Questions About the Pineal Gland That Add to the Mystery of Spirituality The pine cone shaped, pea-sized pineal gland, located in the center of the human brain, is an organ of tremendous interest these days. To many spiritual seekers it is the ‘seat of the soul‘ and the ‘third eye,’ the anatomical part of the human body that acts as our spiritual antennae, connecting us to the non-physical, spiritual planes of existence. However, to many scientists and rigid materialist thinkers, it is strictly an endocrine gland responsible for the secretion of the hormone melatonin, a substance which, among other things, aids in the regulation of our circadian rhythms. Far from cased closed, this small, but intriguing piece of the human organism is the source of endless discussion and consideration, as many people believe that by cleansing, detoxifying or decalcifying the pineal gland, one can more readily achieve spiritual states of consciousness and can experience with greater depth and clarity. 1. 2. 3. 5. 6. 7. 8. 9. 10. Conclusion About the Author

Teleportation From One Location to Another The concept of teleportation mainly stems from science fiction novels and movies, but what was once considered fantasy has been validated as reality in 2014. For some time, developments in quantum theory and general relativity physics have been made, leading up to recent breakthroughs which have opened up a wide arena of study in the future. This past January, numerous teleportation breakthroughs were recorded. One example is the work of Professor Rainer Blatt from the University of Innsbruck. He and the others on his team were able to successfully perform teleportation on atoms for the first time. Without using a physical link, the scientists were able to transfer key properties of one particle to another. This is possible due to the strange behavior that exists at the atomic scale; it’s a phenomenon called entanglement, or what Einstein labeled as “spooky action”. A similar study was published by a team at the University of Queensland in the journal of Nature 2013. Sources:

10 Scientific Studies That Prove Consciousness Can Alter Our Physical Material World Nikola Tesla said it best, “the day science begins to study non-physical phenomena, it will make more progress in one decade than in all the previous centuries of its existence. To understand the true nature of the universe, one must think it terms of energy, frequency and vibration.” Swami Vivekananda influenced Tesla’s work, an Indian Hindu monk and chief disciple of the 19th century saint Ramakrishna. Tesla was also influenced by other Vedic philosophies. Science works best when in harmony with nature. Intention of This Article. I want to make it clear that my intention of presenting this information is to demonstrate that thoughts, intentions, prayer and other units of consciousness can directly influence our physical material world. The Science For quite some time now, physicists have been exploring the relationship between human consciousness and its relationship to the structure of matter. “Everything we call real is made of things that cannot be regarded as real” – Niels Bohr 1.

Thich Nhat Hanh On Fear By Thich Nat Hanh In this excerpt from his newest book, the spiritual teacher and author of Fear: Essential Wisdom for Getting Through the Storm explains how we can release ourselves from the trap of our anxiety. Most of us experience a life full of wonderful moments and difficult moments. But for many of us, even when we are most joyful, there is fear behind our joy. We fear that this moment will end, that we won’t get what we need, that we will lose what we love, or that we will not be safe. We may think that if we ignore our fears, they’ll go away. The first part of looking at our fear is just inviting it into our awareness without judgment. The Buddha was a human being, and he also knew fear. How could the Buddha remain so calm and relaxed when faced with a murderer? Fearlessness is not only possible, it is the ultimate joy. Related on HuffPost:

Pineal Gland's Third Eye: One Of The Biggest Cover-ups in Human History The pineal gland (also called the pineal body, epiphysis cerebri, epiphysis or the “third eye”) is a small endocrine gland in the vertebrate brain. It produces the serotonin derivative melatonin, a hormone that affects the modulation of wake/sleep patterns and seasonal functions. Its shape resembles a tiny pine cone (hence its name), and it is located near the center of the brain, between the two hemispheres, tucked in a groove where the two rounded thalamic bodies join. Every human being’s Pineal Gland or the Third Eye can be activated to spiritual world frequencies and enables you to have the sense of all knowing, godlike euphoria and oneness all around you. A pineal gland once tuned into to proper frequencies with help of meditation, yoga or various esoteric, occult methods, enables a person to travel into other dimensions, popularly known as astral travel or astral projection or remote viewing. The Secret : What they don’t want you to KNOW! Source.

Astronomers Have Found the First Earth-Sized, Habitable Zone Planet Scientists have announced the discovery of Kepler-186f, a faraway planet that’s perhaps the most Earth-like yet discovered. It’s the same size as our home world, and at the right distance from its parent star to have liquid water. So, have we at last discovered Earth 2? “The ultimate goal of all this searching for exoplanets – the real reason we’re doing this – is to answer the question ‘are we alone?’” Barclay says that the answer to that big, ultimate question is almost certainly contained in the answers to a host of smaller ones, starting with: Are there other places out there like Earth? A Habitable World Kepler-186f shares a number of key characteristics with our home planet. But planets that are Earth-sized (and smaller) have been detected before. For a planet to be habitable, it must engage in something of a balancing act. A Very Different Sun Barclay says there’s one major characteristic Kepler-186f doesn’t share with Earth. Two Out of Three Isn’t Bad

How to understand people with borderline personality disorder - by Taylor Ibanez Taylor Ibanez's image for: "How to Understand People with Borderline Personality Disorder" Caption: Location: Image by: I view my reflection through a filter. There are times I see beauty. The unattractive angles of my face and the disgusting details that are truths will be used against myself to validate why you had lost interest. "I knew it all along, you really weren't into me..." You have just become a cold, superficial monster. It works temporarily. A test. A test to see your expression that will validate what I suspected all along. It just so happens you were a really nice person and I fell in love with you for an hour or so. I wanted to reveal myself internally. That was my first mistake. You reacted normally. After I reflect on the drama and you're left wondering what went wrong, I feel that pain again. I wait for your call. I have just created a scenario to be abandoned. It worked. Standing in front of the mirror, viewing my reflection, I pull back a tight-nasal-breath from my sinuses.

How to Be At Peace: Eckhart Tolle on Seeing the Good in Life As told to Leigh Newman The author of The Power of Now reveals the things keep us continually frazzled -- and how to remove them from your life. Peace is one of the most important human experiences. 1. 2. Happiness is actually quite superficial, whereas peace is deeper. 3. This voice in your head takes you away completely from what is happening now. 4. In this case -- and most cases -- it's not the external circumstance (not getting job) that's making you unhappy but what you're telling yourself about those circumstances ("It's not fair!"). 5. The old religious word for this kind of trust is "faith." Near death experience Characteristics[edit] Researchers have identified the common elements that define near-death experiences.[24] Bruce Greyson argues that the general features of the experience include impressions of being outside one's physical body, visions of deceased relatives and religious figures, and transcendence of egotic and spatiotemporal boundaries.[25] Many different elements have been reported, though the exact elements tend to correspond with the cultural, philosophical, or religious beliefs of the person experiencing it: The traits of a classic NDE are as follows: The notice of unpleasant sound or noise (claimed by R. PeaceBody separationEntering darknessSeeing the lightEntering the light He stated that 60% experienced stage 1 (feelings of peace and contentment), but only 10% experienced stage 5 ("entering the light").[30] The distressing aspects of some NDEs are discussed more closely by Greyson and Bush.[33] Cultural variances[edit] NDE variants[edit] Three patterns of distressing NDEs.

6 Amazing Things Scientists Have Discovered About Psychedelics Despite the fact that the U.S. government deems many hallucinogenic or psychedelic substances to be dangerous, classifying them as Schedule I drugs with“no currently accepted medical use,” various scientists have dared to study their effects. What they’ve found over the years paints a startling, promising and powerful picture of potentially game-changing medicines. The government’s “war on drugs” policies severely limit research on psychedelics. Before scientists can complete any federally sanctioned studies, they have to jump through an expensive tangle of hoops and red tape. Restrictions aside, over the years researchers have collected a database of research showing that many psychedelics have an unprecedented potential to treat cancers, addictions and psychological traumas, among other things. Here are some of the coolest things scientists have discovered about psychedelics over the years. A 2009 study offers a plausible explanation for MDMA’s effectiveness treating PTSD.