Out of Place Artifacts and Ancient High Tech

Strange Relics from the Depths of the Earth (I) Author: J.R. 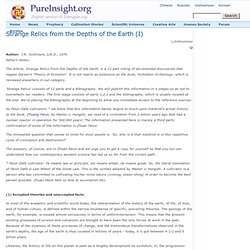 Jochmans, Litt.D., 1979 Editor's Notes: The article, Strange Relics From the Depths of the Earth, is a 12 part listing of documented discoveries that negate Darwin's 'Theory of Evolution'. It is not nearly as extensive as the book, Forbidden Archeology, which is reviewed elsewhere in our category. 'Strange Relics' consists of 12 parts and a bibliography. As Falun Dafa cultivators * we know that this information barely begins to touch upon mankind's actual history. The immediate question that comes to mind for most people is: 'So, why is it that mankind is in this repetitive cycle of civilization and destruction? ' The answers, of course, are in Zhuan Falun and we urge you to get a copy for yourself so that you too can understand how our contemporary western science has led us so far from the correct path. * Falun Dafa cultivator: Fa means law or principle, lun means wheel, da means great.

. (1) Accepted theories and unaccepted facts (2) The bones of forgotten men In 1958, Dr. Out-of-Place Metal Objects. Trivia on Mystery of Prehistoric Cubes and Other Technology. The Event: THE FINDING OF THE PREHISTORIC CUBE When: 1885 Where: Austria The Mystery: In coal beds belonging to the Tertiary period (12 to 70 million years ago), there was found a metal cube, made of iron, carbon, and a little bit of nickel. 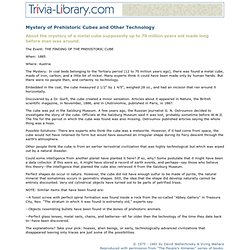 Many experts think it could have been made only by human hands. But there were no people then, and certainly no technology. Embedded in the coal, the cube measured 2 1/2" by 1 4/5", weighed 28 oz., and had an incision that ran around it horizontally. Discovered by a Dr. The cube was put in the Salzburg Museum. Possible Solutions: There are experts who think the cube was a meteorite. Other people think the cube is from an earlier terrestrial civilization that was highly technological but which was wiped out by a natural disaster. Could some intelligence from another planet have planted it here? Perfect shapes do occur in nature. NOTE: Similar items that have been found are: Evidence of Advanced Ancient Technology. From around the world, objects have been discovered over the past 200 years that clearly originate from highly advanced civilisations. 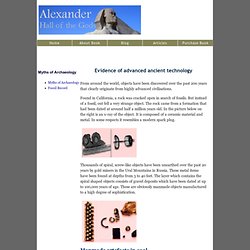 Found in California, a rock was cracked open in search of fossils. But instead of a fossil, out fell a very strange object. The rock came from a formation that had been dated at around half a million years old. In the picture below on the right is an x-ray of the object. It is composed of a ceramic material and metal. Thousands of spiral, screw-like objects have been unearthed over the past 20 years by gold miners in the Ural Mountains in Russia.

Manmade artefacts in coal A small steel cube was found in a block of coal in Austria in 1885. Two workmen signed sworn statements as to their discovery in 1912 of an iron pot inside a large piece of coal that they were breaking up to be used in the furnace of a power plant. Ooparts & Ancient High Technology. Human bones, foot and handprints and artifacts have been found in rock and coal deposits which evolutionists claim is millions and even billions of years old. 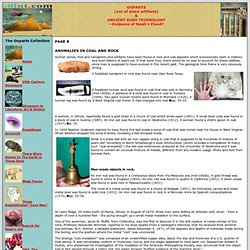 If that were true, there would be no way to account for these oddities, since man is supposed to have evolved in the recent past. The geological time frame is very obviously wrong. A fossilized handprint in rock was found near Glen Rose Texas. A fossilized human skull was found in coal that was sold in Germany (mid-1800s). A woman, in Illinois, reportedly found a gold chain in a chunk of coal which broke open (1891). In 1944 Newton Anderson claimed to have found this bell inside a lump of coal that was mined near his house in West Virginia. What is a brass bell with an iron clapper doing in coal that is supposed to be hundreds of millions of years old? Man-made objects in rock.