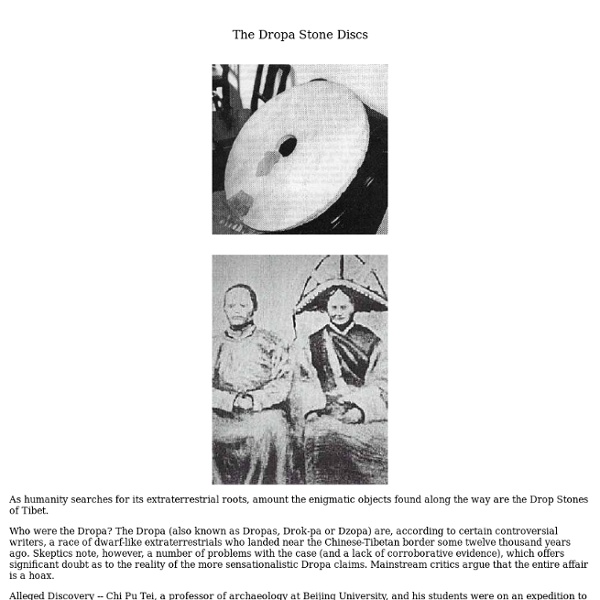 The Dropa Stone Discs As humanity searches for its extraterrestrial roots, amount the enigmatic objects found along the way are the Drop Stones of Tibet. Who were the Dropa? The Dropa (also known as Dropas, Drok-pa or Dzopa) are, according to certain controversial writers, a race of dwarf-like extraterrestrials who landed near the Chinese-Tibetan border some twelve thousand years ago. Skeptics note, however, a number of problems with the case (and a lack of corroborative evidence), which offers significant doubt as to the reality of the more sensationalistic Dropa claims. Alleged Discovery -- Chi Pu Tei, a professor of archaeology at Beijing University, and his students were on an expedition to explore a series of caves in the pathless Himalayan mountains of the remote Bayan-Kara-Ula in Qinghai on the border of China and Tibet. They found many neat rows of tombs with short 4 ft 4 in inch skeletons buried within. Photos of the Dropa Stones Dr. Further research Russian Research Corroboration Related:  Artifacts

The Mexican Government Reveals Mayan Documents Proving Extraterrestrial Contact The reality of extraterrestrial contact with human civilization is becoming more clear by the month as streams of information about the extraterrestrial presence and past influence hits. While some of us still have our doubts about ET contact, many are starting to realize the truth that has been talked about for centuries. One big story involves the Mexican government who has released documents and images of objects found on the site of Calakmul, Mexico which help prove the reality of ET contact. Thanks for this release can be given to the National Institute of Anthropology and History (INAH) who found these fascinating disks in Mexico. “Mexico will release codices, artefacts and significant documents with evidence of Mayan and extraterrestrial contact, and all of their information will be corroborated by archaeologists,” he said. The Mexican government is releasing these state-held secrets that have been protected for about 80 years. Above is an image of the disks in question. Sources:

The Dropa (or Dzopa) stones A photograph alleged to show one of the ‘Dropa stones’ A number of publications, particularly on the Ancient Astronaut end of the Bad Archaeology scale, have repeated a story about some stones said to have been found in caves at Bayan Kara Ula in western China. The story became known in the west principally through Erich von Däniken’s second and third books, Return to the Stars and Gold of the Gods, although it appeared first in Robert Charroux’s work and has since become a staple of ufological literature. The Bayan Kara Ula (Bayan Kara Shan or Bayan Har Shan) region (around 97°E 34°N), in Qinghai (Tsinghai) and Sichuan Provinces, contains the sources of the Tontian He (Yangtse Kiang) and Za Qu (Mekong) Rivers and until relatively recently, it was very isolated. In January 1938, according to the story, Chu Pu Tei (since 2009, a Chinese version of the name – 齐福泰, Qi Futai or Qifu Tai – has been in circulation), a Chinese archaeologist, made a remarkable discovery in caves in the region.

Mystery Disks Alien Connection One of the news stories finding its way across the World Wide Web of late is about a team of Chinese scientists traveling to the remote western province of Qinghai to investigate reports of a mystery pyramid that local legend claims is an ancient launch tower left by aliens. According to the story released by China's state-run Xinhua agency, the mystery pyramid is located on Mt. That the government of China would permit a public news statement about a scientific investigation of a possible alien/UFO landing-site suggests that the Communist Chinese government is relaxed about public consideration of alien life. Rumors of clandestine meetings by military personnel and alien visitors in the church-oriented United States (and various other countries of the world) have always been denied in official circles. China's old bamboo curtain served for years to help make the politics and culture of that nation an enigma to the rest of the world.

The 10,000 year-old Sumerian space maps, dictated by ET Homo Sapiens from Planet Nibiru Excerpt from “Anunnaki: legacy of the Gods, techno-savvy ET s from the Planet Nibiru who came for gold, created us from their genome to work the mines, posed as Gods, decided to let us drown, but then decided to breed us to work for them.” Sumerians’ rocket route maps and clay tablets show planets past eye-range. The Sumerians wrote that giant people, whom the Sumerians called “Anunnaki” or Those-Descended-from-the-Sky, said they came from the planet Nibiru 450,000 years ago. Clay tablet in the ruins of the Royal Library at Nineva shows how to go through inner solar system. In Andy Lloyd’s scenario, their planet, Nibiru, revolves around Nemesis, Solaris’ binary dark dwarfstar; this, from the perspective of Earth, is as far from Earth as Nibiru goes. Sumerians lacked telescopes and couldn't see Uranus’ and Neptune’s orbits the route maps show. One of the geometrical drawings are the Nazca lines. Image left: Nazca-geometrical-drawing.

The Mysterious Dropa Stones – Fact or Fiction? The Dropa stones are said to be a set of 716 circular stone disks dating back 12,000 years on which tiny hieroglyphic-like markings can be found. Each disc is said to measure up to 1 foot in diameter and carry two grooves, originating from a hole in their centre, in the form of a double spiral. The discovery of the mysterious discs apparently took place in 1938 in the mountains of Baian Kara-Ula on the border between China and Tibet, where a Chinese professor, Chi Pu Tei, detected regularly aligned rows of graves. The skeletons measured only around four feet in height and had skulls which were large and over developed. Inside a nearby cave system, Chi Pu Tei and his team found interesting rock art which depicted figures with round helmets. Tsum Um Nui For the next two decades, it is believed that the discs were labelled and stored at Beijing University before being given to Tsum Um Nui for study in 1958. Russian Involvement in 1968 the Dropa stones apparently came to the attention of W.

Dogon People of Africa | Ancient Aliens Ancient Aliens in Africa: The Dogon people are one of the most fascinating sources of evidence for Ancient Aliens. The Dogon populate the central plateau region of Mali in Africa, there are said to be between 400,000 and 800,000 in this remote civilization. The Dogon culture has been known for its dramatic art, tribal customs, and most of all their cosmology. The controversy started in 1930 when French anthropologists recorded a strange legend from Dogon priests. Passed down through oral tradition, the Dogon told a tale of alien visitation from the Star System of Sirius. The alien race was referred to as the Nommos and was said to be an aquatic race of humanoid creatures (from their descriptions similar to Mermaids or Mermen). The anthropologist recorded the story for what it was worth and went about their business. In 1970, astronomers were able to photograph Sirius B, the companion star to Sirius A. The Dogon also identify a third star in the Sirius system they call “Emme Ya”.

China's Savage War With Space Aliens | China (Before It's News) Some ancient writings of China that precede their calendar by as much as 300 years, suggest that regions to the north were invaded by extraterrestrial forces. These alien armies built pyramids, enslaved the people, and battled defiant Asian warlords. Yet another race, indigenous to the same area at that time, stepped into the battle. Gigantic men, 12-feet tall with flaming red hair and leather suits of armor, helped repel the alien intruders. It was a time when the ferocious giants roamed the earth. Join my Twitter feed | Like my Facebook page Zecharia Sitchin spoke of the Annunaki and other researchers speak of the terrible air and nuclear war waged 25,000 to 30,000 years ago between two advanced city-states located in what's now northern India and the great Mongolian Gobi Desert. Ancient scraps hint at alien war and giants A horrific war Bits of information about the war still exist Jade artifact: faces of alien masters Angry 'gods' invaded defenseless ancient China