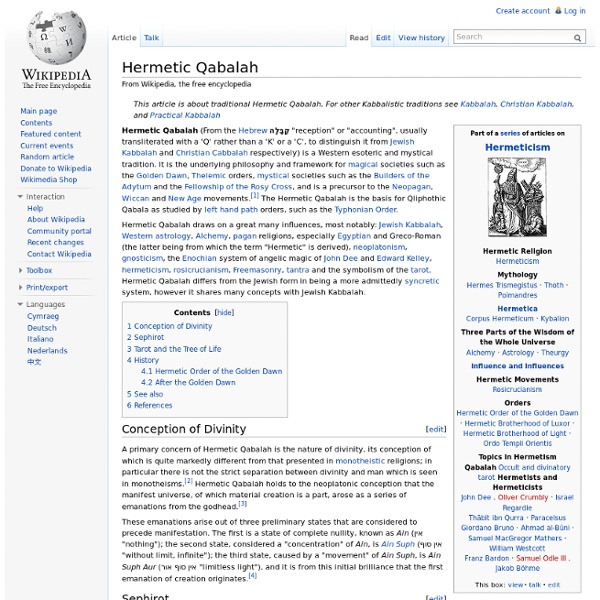 Teachings[edit] Conception of Divinity[edit] A primary concern of Hermetic Qabalah is the nature of divinity, its conception of which is quite markedly different from that presented in monotheistic religions; in particular there is not the strict separation between divinity and humankind which is seen in monotheisms.[2] Hermetic Qabalah holds to the neoplatonic conception that the manifest universe, of which material creation is a part, arose as a series of emanations from the godhead.[3] The Sephiroth in Hermetic Qabalah[edit] From Ain Suph Aur crystallises Kether, the first sephirah of the Hermetic Qabalistic tree of life. From Kether emanate the rest of the sephirot in turn, viz. Each sephirah is a nexus of divine energy and each has a number of attributions. Tarot and the Tree of Life[edit] Hermetic Qabalists see the cards of the tarot as keys to the Tree of Life. Relation to Western Magic, Alchemy and Astrology[edit] History[edit] Hermetic views of Qabalah origins[edit] See also[edit]

Tree of life (Kabbalah) The Tree of Life, or Etz haChayim (עץ החיים) in Hebrew, is a classic descriptive term for the central mystical symbol used in the Kabbalah of esoteric Judaism, also known as the 10 Sephirot. Its diagrammatic representation, arranged in 3 columns/pillars, derives from Christian and esoteric sources and is not known to the earlier Jewish tradition.[citation needed] The tree, visually or conceptually, represents as a series of divine emanations God's creation itself ex nihilo, the nature of revealed divinity, the human soul, and the spiritual path of ascent by man. In this way, Kabbalists developed the symbol into a full model of reality, using the tree to depict a map of Creation. The symbolic configuration of 10 spiritual principles (11 can be shown, of which - Keter and Da'at are interchangeable),

Christian Kabbalah The Renaissance saw the birth of Christian Kabbalah/Cabala (From the Hebrew קַבָּלָה "reception", often transliterated with a 'C' to distinguish it from Jewish Kabbalah and Hermetic Qabalah[1]), also spelled Cabbala. Interest grew among some Christian scholars in what they saw to be the mystical aspects of Judaic Kabbalah, which were compatible with Christian theology. Although somewhat obscure, the tradition of Christian Cabala or Catholic Cabala still persists today.[citation needed] Free Kabbalah Course - Kabbalah Education Center, Bnei Baruch Every Wednesday for 12 Weeks 1) Introduction To Kabbalah What is (and is not) Kabbalah?

Tree of Life From Thelemapedia Categories: Qabalah | Tree of Life The Tree of Life is a tool used to categorize and organize various mystical concepts, and is central to the teachings of Aleister Crowley and the Qabalah. At its most simple level, it is composed of ten spheres, or emanations, called sephiroth (sing. "sephira") which are connected by twenty two paths. The Kabbalah Centre The ancient Kabbalist Rav Shimon bar Yochai wrote in the Zohar that it was Moses, not God, who parted the Red Sea, allowing the Israelites to narrowly escape Pharaoh and the Egyptian army. In order to accomplish this miracle, Moses combined the power of certainty with a very powerful spiritual technology. He had possession of a formula that literally gave him access to the subatomic realm of nature.

World Center - Science and Kabbalah - The Alternative of Our Life Foreword Kabbalah is known to be a secret wisdom. It is precisely this secrecy surrounding Kabbalah that gave rise to numerous legends, falsifications, gossip, ignorant arguments and wrong conclusions. Only at the end of the 20th century was the wisdom of Kabbalah allowed to be revealed to all and even circulated around the world. Therefore, addressing the reader at the beginning of this book, I feel obliged to tear age-old layers off this ancient wisdom that is common to all mankind. The wisdom of Kabbalah has nothing to do with religion, meaning it is no more related to it than physics, chemistry or mathematics.

What is Kabbalah by Matt Slick Kabbalah is difficult to categorize because it is a subjective non-falsifiable belief system. In other words, it rests in non-verifiable philosophy, not in historic fact. Nevertheless, kaballah is a mystical and esoteric system of observing and interpreting the universe and mankind that also seeks to reveal the true relationship between God, man, and the universe. It teaches that there is a divine being, neither male nor female, that has 10 primary aspects called sephirot which are represented in the Tree of Life (see diagram to the left).

TITLE: PAGANS LOVE PINE CONES AND USE THEM IN THEIR ART "Roman Cult -- The bronze hand, to the left, dates from the late Roman Empire, when all forms of divination from scrying to astrology, flourished. The hand bears the symbols, such as a cockerel's head and a pine cone, of the Roman mystery cult of Dionysus. Worshippers of Dionysus would work themselves into a frenzy, in which they might see visions of the future." ["Mind & Magic", by Francis X. Mysteries Of The Pineal Scientists have been mystified by the pineal gland for centuries. As the brain and central nervous and endocrine systems were progressively unravelled by the anatomists, physiologists and biochemists, the pineal gland resolutely refused to yield up its secrets. Until recently the scientific community regarded it as having no function in man, being but a vestigial remnant from an earlier stage in evolution.

Mysteries of the Pineal Gland….Unlocked ~~~~~ Please Re-Post article by Linking to my site ~~~~~ KNOWLEDGE IS POWER ~ Spread the Word!!! Mysteries of the Pineal Gland….Unlocked The POWER of the Pineal Gland ~ Was Acknowledged and Acclaimed by the Egyptians…and Believed to Be “The Seat of the Soul” Magical Egypt - Secrets Of The Pineal Gland And The Spirit Molecule (DMT) Discover the pioneering work of Professor Rick Strassman that raised some inmportant questions about the pineal gland and its interaction with a strange hallucinogenic chemical known as DMT. Could the interaction of these two components be the seat of conciousness? Could it in fact be the gate through which we enter and leave each new life? The Occult - Occultopedia: The Occult and Unexplained Encyclopedia Welcome to Occultopedia, the premier internet index of the paranormal, occult and inexplicable. In addition to being the foremost online destination for information about the supernatural, unusual phenomena and the occult, Occultopedia also features a variety of resources for the pagan community, new age buffs, unexplained phenomena enthusiasts, curious minds, and skeptics as well.Occultopedia is the genuine article, the original and the best internet index of the extraordinary and uncanny, shamelessly copied by many, but never equaled. Online since 1995 — at first in a free web space provider, and in 1997 finally with its own domain name and hosting — Occultopedia still is the principal online resource for those looking for the unexplained, the curious and the unusual. Occultopedia is a work in progress, and is not completed.