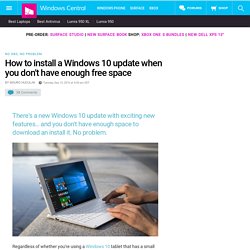 No problem. Regardless of whether you're using a Windows 10 tablet that has a small storage drive to start, or if you've managed filled up your hard drive, a lack of free space doesn't mean you have to miss out on important updates that fix bugs or add new features. Here's how to get around a lack of space for installing updates with just a pair of USB flash drives. Of course, if you've got a decent-sized storage drive, you could try cleaning up your hard drive or temporarily moving some of your larger files (photos, movies, etc) onto an external drive.

But if that's just not an option, here's how to get around a lack of space for installing updates with just a pair of USB flash drives. Installing Windows 10: What to do when there’s not enough storage space. By now, most people who want Windows 10 on their PCs (and some who don’t) have probably installed the upgrade by now. 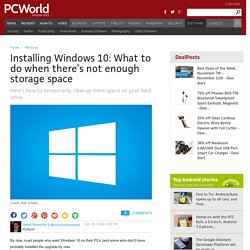 Upgrade a Small Tablet or Laptop to Windows 10. One of the many questions swirling around Windows 10 in these confusing days leading to the launch is how it will handle upgrades on storage-constrained Windows 8.1 devices like mini-tablets and mini-laptops. 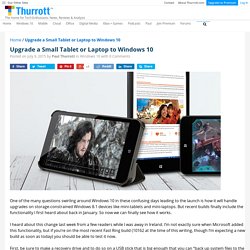 But recent builds finally include the functionality I first heard about back in January. So now we can finally see how it works. I heard about this change last week from a few readers while I was away in Ireland. I’m not exactly sure when Microsoft added this functionality, but if you’re on the most recent Fast Ring build (10162 at the time of this writing, though I’m expecting a new build as soon as today) you should be able to test it now. First, be sure to make a recovery drive and to do so on a USB stick that is big enough that you can “back up system files to the recovery drive.” This can be USB- or microSD-based, as I was told back in January. Not Enough Disk Space for Anniversary Update. Please provide more information so that the cause of your problem may be diagnosed. 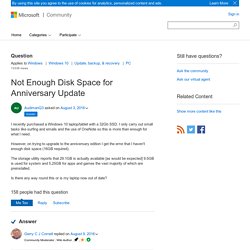 Please provide a copy of your System Information file. To access your System Information file select the keyboard shortcut Win+R, type msinfo32 and click OK . Place the cursor on System Summary. Select File, Export and give the file a name noting where it is located. Click Save. For help with OneDrive see paragraph 9.3: Upgrade Devices with less free disk space to Windows 10.

While many Windows machine are now running the latest operating system, Windows 10, users having devices with less free disk space may still be struggling with the upgrade process. 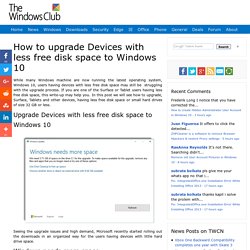 If you are one of the Surface or Tablet users having less free disk space, this write-up may help you. In this post we will see how to upgrade, Surface, Tablets and other devices, having less free disk space or small hard drives of size 32 GB or less. Upgrade Devices with less free disk space to Windows 10 Seeing the upgrade issues and high demand, Microsoft recently started rolling out the downloads in an organized way for the users having devices with little hard drive space. Windows needs more space Microsoft has since Aug 4th, sent notifications to such devices, and offered them the Windows 10 free upgrade.

If not, then such users can now also upgrade their Tablets and Surface using the Windows 10 Media Creation Tool. If your device allows it, you can use an external USB drive for the upgrade process. How to install the Anniversary Update on 32GB devices. The Windows 10 Anniversary Update is coveted by many users, but unfortunately not all of them have been able to install the OS due to hard disk space limitations. 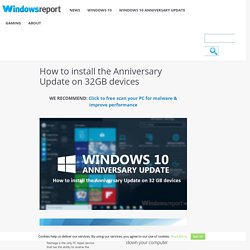 In order to install Windows 10 version 1607, you need a minimum hard disk space of 16GB, and this can be quite a major problem for low budget laptop owners. This situation has created much discontent among users, who are very upset they can’t upgrade to the Anniversary Update. When you use a 32GB laptop, freeing enough space to install the update can become quite a challenge. Actually, this is not the first time when Microsoft imposes memory limits for users. Windows phone owners using 512 MB terminals have been the first to be excluded from the Windows 10 club.

Users are reporting they can’t install the Anniversary Update on 32GB eMMC devices I have two budget laptops (a Lenovo S21e-20 and a HP Stream 11 Pro) that both have non-expandable, non-replaceable 32GB (30GB usable in real life) eMMC storage.